Breakdown of Crew-1 Flight Plan: an inside look

An illustration of the planned flight stages of Falcon 9 and the Crew-1 Crew Dragon, set to launch on November 14, 2020. Credit: SpaceX

On Tuesday November 10, teams at SpaceX and NASA completed the final launch readiness review for the first operational mission of the SpaceX Crew Dragon spacecraft. The NASA Readiness Review board has given a “go for launch” for the Falcon 9 and the Crew Dragon vehicle, affectionately named “Resilience.”

Crew-1 is currently scheduled to liftoff from Launch Complex 39A at the Kennedy Space Center in Florida on Saturday November 14 at 7:49 p.m. EST. This will mark the first full length mission for SpaceX on behalf of NASA, with the crew consisting of NASA astronauts Mike Hopkins, Victor Glover, Shannon Walker, and Japanese Aerospace Agency (JAXA) astronaut Soichi Noguchi scheduled for a full duration stay of six months aboard the International Space Station. Crew-1 will be the second crewed flight for Crew Dragon, following the Demo-2 mission earlier this summer carrying NASA astronauts Bob Behnken and Doug Hurley safely to the ISS and back. 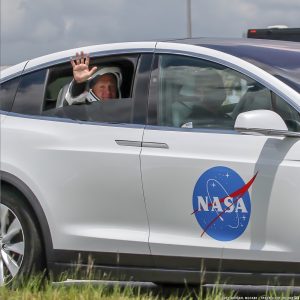 Demo-2 Astronaut Douglas Hurley waves while enroute to the waiting SpaceX Falcon 9 and Crew Dragon at Launch Complex 39A. The mission launched on May 30, 2020, at 3:22 pm EDT. Photo: Michael McCabe, SpaceFlight Insider

With the successful completion of Demo-2, NASA and SpaceX were able to collect crucial data to fully evaluate Dragon’s performance during the launch, orbit, docking, and re-entry phases of the flight. Following the flight, NASA found that a few minor items of note would need to be corrected before Crew Dragon could be considered operational to regularly ferry astronauts to and from the ISS. Among the items changed, minor upgrades to the parachute system as well as the heat shield were made. While both systems performed nominally during the flight, minor adjustments were still needed in order for Dragon to pass NASA’s stringent safety requirements. Now that updated Dragon is ready to fly, it is hoped that the six crewed missions currently contracted by NASA will perform as routine occurrences.

The flight plan for Crew-1 will closely mimic that of Demo-2, however because this flight is considered operational, test flight parameters will not need to be performed. The launch trajectory will bring Falcon 9 and Dragon northeast of the Kennedy Space Center for an eight and a half minute ride to orbital insertion. Just over two minutes after liftoff, the first and second stages will part ways; one heading back to earth, the other towards the station. The first stage will perform its signature flip maneuver followed shortly thereafter by the boostback burn, as it begins to guide itself towards the waiting autonomous drone ship “Of Course I Still Love You.” Assuming all goes according to plan, the first stage booster will have landed safely on the drone ship approximately eight minutes after liftoff.

As soon as the second stage Merlin Vacuum engines ignite, the real work begins for Dragon and the second stage. Once the vehicle has entered a nominal orbital insertion, Dragon will separate from the second stage, where it will begin the overnight journey to chase down and catch up with the ISS. In order to catch up to the station, Dragon’s Draco thrusters will complete phasing burns at apogee of the orbit to raise the spacecraft to the same geocentric orbital path as the ISS with an expected inclination of 51.66 degrees. The process is gradual and takes place at apogee for each particular orbit the spacecraft aligns itself to. These maneuvers are expected to occur autonomously. However, if an anomaly arises, Commander Mike Hopkins and Pilot Victor Glover can manually take control of the spacecraft, intervening to either bring Dragon to station manually, or abort the orbit altogether and bring Resilience back to earth. 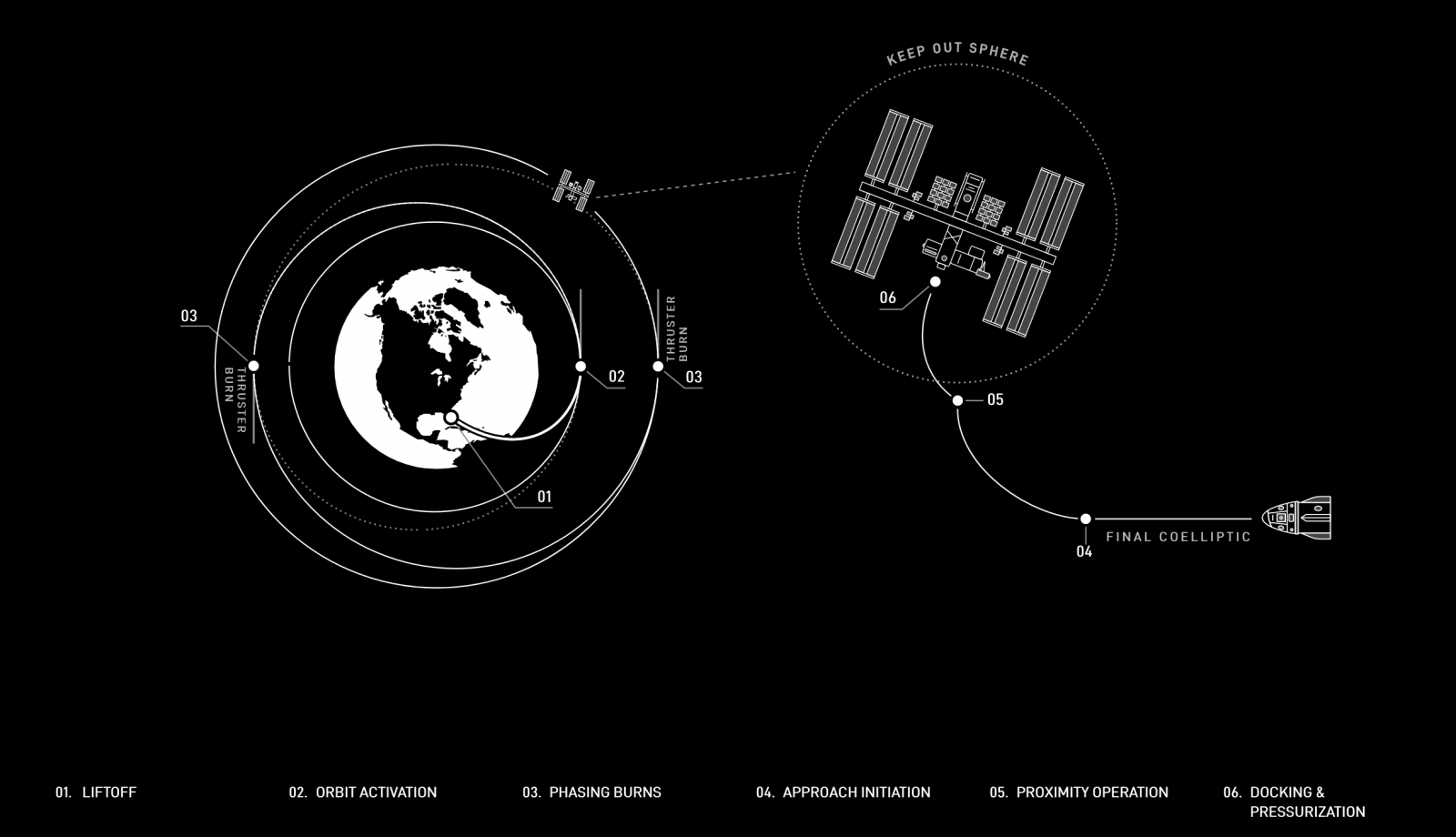 An illustration of the planned approach to the International Space Station by SpaceX’s Crew-1 Crew Dragon spacecraft. Credit: SpaceX

Once Dragon’s phasing burns are complete, the spacecraft will begin to position itself in a co-eliptical transfer orbit. This gives Dragon a low inertial approach rate as it lines up for the final approach phase outside of the station’s virtual “200 meter keep-out sphere.” The spacecraft will approach station at a steadily slow pace using its autonomous docking system. Dragon is expected to reach the ISS Harmony Forward Docking Port at approximately 09:20 UTC on November 15. 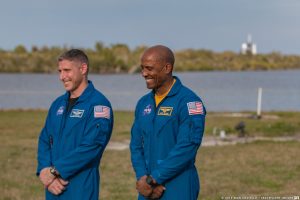 One of the main differences between the “Resilience” Dragon spacecraft and Demo-2’s “Endeavour” spacecraft, is the longevity of the solar panels and spacecraft systems, with the current spacecraft possessing the ability to stay on orbit much longer than the earlier test subject. Dragon’s expected stay on orbit will be approximately 180 days, where mission specialists Shannon Walker and Soichi Noguchi will join Expedition 64 in preparing and performing science experiments onboard the station.

When it’s time to come home, computer systems onboard the ISS, Dragon, and in front of controllers on the ground, will all be continuously monitoring the spacecraft’s departure as Dragon autonomously exits the space station’s keep-out sphere. Once beyond the keep-out sphere, Resilience will complete its first burn to depart station’s orbital path.

Following the departure, Resilience’s thrusters will fire at two separate points, bringing it onto a descent to set itself up for its final de-orbit burn. Dragon will then jettison its service module trunk and start the de-orbit burn, which will begin the reentry process. After completion of the reentry phase, Dragon’s four Mark III parachutes will deploy, guiding the vehicle to a gentle splashdown in the waters off the coast of Florida. 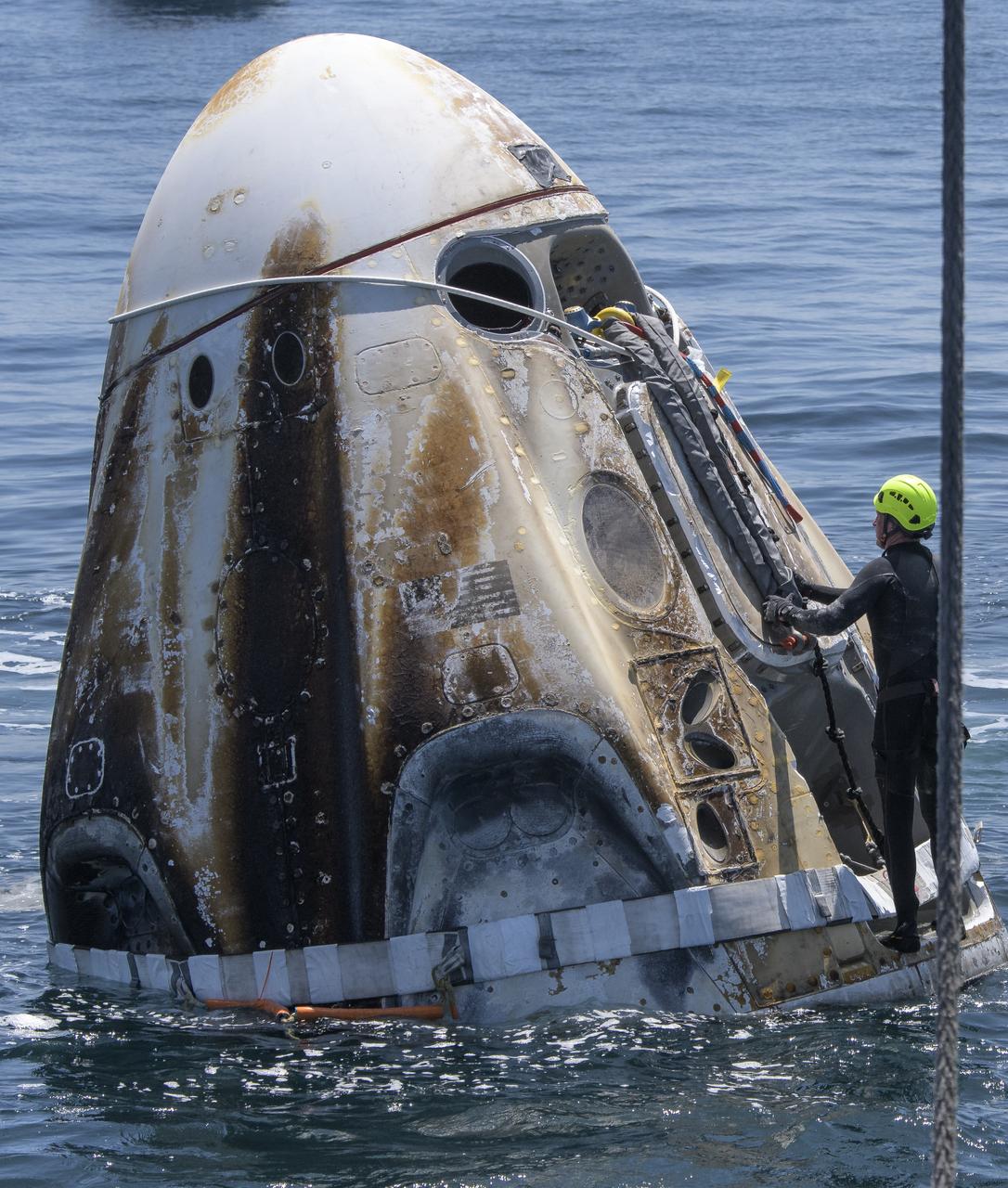 Support teams arrive at the SpaceX Crew Dragon Endeavour spacecraft shortly after it landed with NASA astronauts Robert Behnken and Douglas Hurley onboard in the Gulf of Mexico off the coast of Pensacola, Florida, Sunday, Aug. 2, 2020. The Demo-2 test flight for NASA’s Commercial Crew Program was the first to deliver astronauts to the International Space Station and return them safely to Earth onboard a commercially built and operated spacecraft. Behnken and Hurley returned after spending 64 days in space. Photo Credit: (NASA/Bill Ingalls)