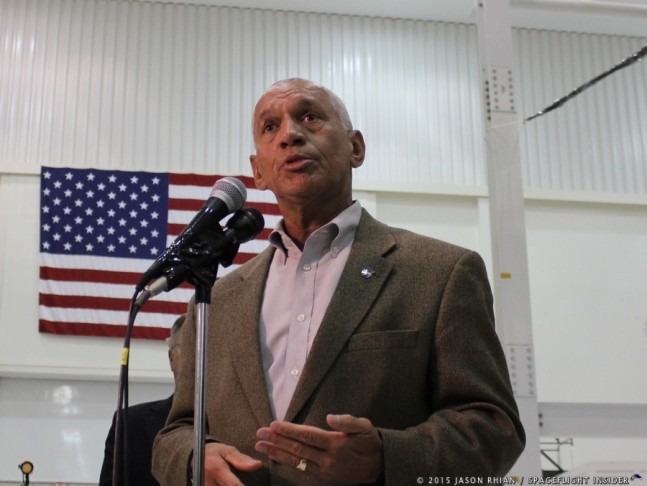 One need only view Kennedy Space Center’s Launch Complex 39A and the large SpaceX logo that adorns the new building in front of the historic site to help judge how NASA views its commercial partners. During the Wednesday, June 10, vote on NASA’s Fiscal Year 2016 commercial crew budget, the committee opted to cut the budget request for NASA’s Commercial Crew Program. It should come as no surprise then that the vote left NASA’s current Administrator dissatisfied.

Charles Bolden, a four-time space shuttle veteran as well as a retired Marine Corps Major General and the current head of NASA, issued the following response to the Senate’s budgetary decision:

“I am deeply disappointed that the Senate Appropriations subcommittee does not fully support NASA’s plan to once again launch American astronauts from U.S. soil as soon as possible, and instead favors continuing to write checks to Russia.

“Remarkably, the Senate reduces funding for our Commercial Crew Program further than the House already does compared to the President’s Budget.

“By gutting this program and turning our backs on U.S. industry, NASA will be forced to continue to rely on Russia to get its astronauts to space – and continue to invest hundreds of millions of dollars into the Russian economy rather than our own.

“I support investing in America so that we can once again launch our astronauts on American vehicles.”

According to Parabolic Arc, the Obama Administration had requested $18.529 billion – of which the Appropriations Committee approved $18.3 billion. NASA’s Commercial Crew Program saw its budget request cut an additional $100 million from the House Appropriation of $1 billion. This is on top of an estimated $244 million which had already been cut from the space agency’s request.

A report appearing on SpaceFlight Now details how the ranking Democrat on the panel, Sen. Barbara Mikulski, will likely offer an amendment to add the $300 million to the CCP funding line during the full Senate Appropriations Committee on Thursday, June 11.

During this recent vote, NASA’s exploration efforts fared better with the new super heavy-lift Space Launch System (SLS) booster receiving $1.9 billion, which is approximately $200 million more than the FY 2015 enacted level and, according to Parabolic Arc, $544 million above the actual request. The spacecraft that is planned to fly atop SLS, Orion, received $1.2 billion. While this marked no real change above the FY 2015 request, it was $104 million above the initial request.

Other organizations took a more neutral stance on the vote. What follows is a statement issued by the Coalition for Space Exploration regarding the CJS Appropriations Bill which was released on the afternoon of June 11:

WASHINGTON, D.C. – The Coalition for Space Exploration is grateful for the strong bipartisan leadership demonstrated by Chairman Shelby and Vice-Chairwoman Mikulski in support of our nation’s space exploration program in the FY 2016 Commerce-Justice-Science Appropriations bill advanced by the committee today. The emphasis and priority placed on the exploration systems and space science missions that will help return American astronauts beyond low Earth orbit for the first time in more than 40 years represents the Committee’s continued commitment to U.S. leadership in space.

We recognize that the Chairman, Vice-Chairwoman and members of this Committee worked under a very challenging budget allocation to prioritize funding for exploration programs, and we appreciate their focus on completing the human exploration systems and advanced space science programs that will ensure America remains the uncontested leader in space exploration for decades ahead. This bill, along with the strong exploration funding in the House CJS bill, represent a continued bipartisan and bicameral commitment to NASA and its exploration program.

About the Coalition for Space Exploration
The Coalition for Space Exploration is a group of space industry businesses and advocacy groups that collaborates to ensure that the United States remains the leader in space, science and technology by reinforcing the value and benefits of space exploration with the public and our nation’s leaders, and building lasting support for a long-term, sustainable strategic direction for space exploration.

NASA is currently working under what can be considered a two-pronged approach to space. On one side are the commercial companies, Boeing, SpaceX, and Orbital ATK, who are providing cargo and planned crew transportation services to the International Space Station. Freed from handling this responsibility, the space agency is working to return to the business of sending crews to distant destinations – such as a mission to remove a boulder from an asteroid and tow it into lunar orbit, and a mission to Mars.

Extremely disappointing news Jason. But does not surprise me the house and the Senate Subcommittee’s reaction to Space! I say we take the money out of their paychecks… That’s probaly why they’re not giving the money because it would take away from their overly padded paychecks…

we are dead. Aerospace industry is dying and we can’t except the reality of it yet. I wish I could say something different. My father worked at KSC for 10 years of hell and layoff threats due to congress. SLS, Commercial Crew, ISS, has been a game for the last 30 years. We need to remember Von Braun plan of universe exploration. Nasa is still using Von Braun design and plans nothing new has happened in almost 50 yrs. Musk is not the answer ,even he depends on our taxpayers to pay for his dreams(not). He is stealing Von Braun game book. I think we need to think about the future and start a new space organization with a plan of either going back the moon or mars. Pres. Obama has watched to many sci-fi movies on catching asteroids and landing on them(that fars). I think we as space followers need to wake up and stop living in the golden days of aerospace. We have a bright future but we need to start a new organization and not wait on the government to accomplish the goals. YES we might struggle but we’ll make everybody unites and believe the future will bright, not living the past.

I hope that amendment passes, and the states responsible vote out those morons next election. (As far as I know New England states are useless in that second one.)

I agree Mark, sad they can’t see whats the big picture only their current pocket books… Im a Tour Guide at Mennedy whose main demographic is Uk and European tourists that wanna see where the awesome happens, and I educate them on the Commercial Crew and Orion SLS to show we havent stopped but leave to dinosaurs who should have been out of office 20 years ago to dictate terms….

NASA needs to shift funding out of Earth Sciences and into space flight, to fully fund both, SLS and Commercial crew. This would keep our tax dollars in the US and put our people back to work instead of making sure the Russians have jobs.

Your presumption is that NASA would retain the funding it currently has for earth science.

NASA needs to stop spending money doing things that lots of other folks already know how to do. NASA, working directly on Earth Environmental Science is unneccessary, redundant, and wasteful. The most effective way that NASA can impact Earth Science is to advance Planetary Science…which has been repeatedly stripped of funding by SLS/Orion. Planetary Science adds a much needed wider perspective to Earth environmental science…pinning down some variables in the numbers that have been neglected, aligns more directly with NASA’s mission, and requires things that currently only NASA can do most effectively for the U.S. Planetary Science is not given enough consideration by the Earth Environmental Science community, and thus also needs NASA credibility more than any new LEO or GSO probe does.
Practically any proper environmental research organization can obtain research funding from the Government for environmental science and use it to hire Boeing, or Martin Marietta or someone to build them an LEO or GSO spacecraft. Then they can use a portion of that same funding to hire SpaceX or Orbital, or Arianspace or someone to launch it for them. Those organizations are already NASA partners and thus have access to NASA’s research database and thus everything that NASA knows. That is a far more efficient use of Government money than giving NASA extra(?) funds to partner directly with environmental research organizations since all NASA programs contribute a portion of their budgets to the massive NASA overhead budget. Private research organization, and Planetary Science, can get far more done without NASA hand in Earth Environmental Science than they can with it.

Tom, Russians dont have money either they have jobs but arent getting payed due to the Roscosmos… Workers striking halting the new launch facility in the works from being finished. We need Earth Sciences, because of Earth Sciences we have helped cure many diseases and make everyones lives a little beter thanks to it. Senator Ted Cruz should never have been appointed to the Head of the NASA Budget Committee. I said the moment he came to the head this would happen. He has voted against NASA on numerous occasions and halted programs due to his idiotic opinions on this country….

I’m shame to admit that Ted Cruz is my Senator & there are many here who don’t like him. Texas Senators are supposed to be independent, but Cruz is a Shelby lackey. Hence, he(Cruz) should move to Alabama.

I don’t even think these Republicans care whether ISS remains in low earth orbit much less creating a new commercial infrastructure that reduces HSF costs. All that matters are the good ole bucks being poured into their states where SLS is being built. The fact that SLS launch dates and any proposed missions are neither here nor there is of no importance either.

I can’t believe that the Coalition for Space Exploration called this decision leadership. They are as clueless as the subcommittee.

If NASA wasn’t spending so much on earth sciences, we’d have plenty of money for SLS and Commercial crew. Let the EPA and NOAA do the earth sciences and leave NASA to space flight. I thought that is what Cruz was leading too.

Once again the Federal Legislature insists on robbing Commercial Crew and giving it’s funds to SLS/Orion. I had started to believe, and said so in my blog, that law makers had finally started to recognize the value that privatizing LEO has for the country. Clearly, they still hold out the forlorn and clueless hope that SLS/Orion (or perhaps Atlas/Orion) have a future as ISS Shuttle replacements and that the Government can continue to clutch the purse strings of space exploitation.
200 million and 100 million respectively for SLS and Orion is about enough to add another coat of paint. Those projects are so expensive that such numbers are a pittance and it does not help those programs as much as it potentially hurts Commercial Crew. They are not trying to advance deep space exploration, they are trying to shore up the troubled launch schedule of SLS/Orion with LEO launches by delaying and endangering the future of Commercial Crew. When everything is said and done, and Bolden is about to write the check to the Russians, lawmakers will jump up and say, “Send Orion to fill the gap”. You watch, they’ll do it. Commercial Crew will be good for the country’s economy, good for national security, and good for U.S. leadership in space. The very fact that privatization of space is less expensive makes these cuts impact CC in the negative far more than they can ever directly impact SLS/Orion in the positive.