America ‘On Board’ for Orion’s first launch 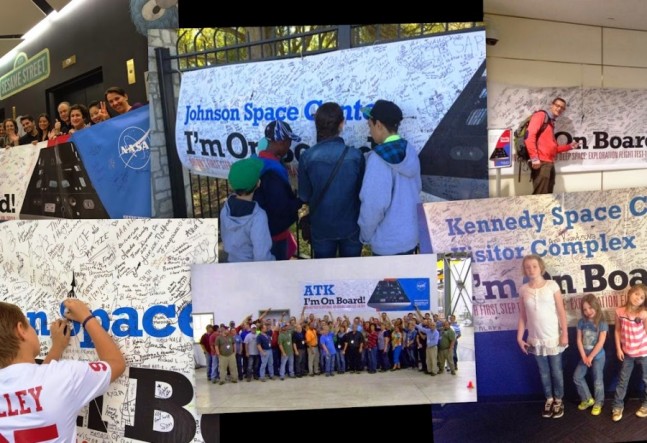 The first Orion spacecraft launch is just days four away, so the excitement grows in the United States for this maiden flight, which might pave the way for future missions into deep space. When NASA asked people earlier this year to show their support for Orion’s first mission, the nation confirmed that Americans are really “On Board” for space exploration. “On Board” is the name of the agency’s campaign to engage people in the spaceflight issues, letting everyone to share the enthusiasm about the upcoming manned space missions.

NASA proposed some ways to express support for the Orion mission. People were asked to channel their inner astronaut and artist by unleash their creativity on a coloring sheet, then show the world by sharing a photo with the artwork on social media. NASA also encouraged the public to submit their names by Oct. 31, that will fly on a microchip aboard Orion when it launches. “But the journey for your name doesn’t end there. Once submitted, your name will automatically be entered to fly on future exploration flights and missions to Mars, allowing you to rack up frequent flier miles as a member of a global space-faring society,” NASA said.

The initiative is targeted to young people, the future astronauts. Thus it is strongly endorsed by the most beloved Sesame Street characters like Elmo, Cookie Monster, Grover, and Slimey. NASA and Sesame Street share comic strips, videos and graphics of some of their most popular Muppet characters interacting with Orion concepts to help build awareness of human spaceflight, Orion’s flight test and NASA’s Journey to Mars. The characters from Sesame Street have even taken to promoting the first flight of Orion. Image Credit: Sesame Street

“By weaving in STEM education themes, stimulating preschoolers’ natural curiosity and emphasizing the team effort it takes to place humans on Mars, this partnership is a natural extension of Sesame Street’s mission to help all kids grow up smarter, stronger, and kinder – all while moving the next generation one step closer to the next giant leap for humankind,” NASA noticed.

One of the young, future astronauts is 17-year-old Abigail Harrison who runs its own blog at astronautabby.com, expressing her astronaut aspirations. She’s also “On Board” and has been invited behind the scenes at NASA’s Kennedy Space Center to provide press coverage and commentary during the upcoming Orion launch. “Orion is the United States’ next generation deep space vehicle,” explains Harrison. “Since the end of the Apollo program, human space exploration has been confined to low-Earth orbit. With Orion and heavy lift launch vehicles like Space Launch System, we will once again be capable of pushing human space exploration beyond this boundary.”

Seth Statler, NASA’s Associate Administrator for Legislative and Intergovernmental Affairs, reveals that also many members of Congress will witness the launch. Needless to say, the launch will gather America’s veteran astronauts as space shuttle mission’s participants Sam Durrance, Bruce McCandless, Mike McCulley, Jerry Ross and Winston Scott are among those scheduled to attend.

The public is obviously invited and the launch will be easily seen in Space Coast. “The Orion launch will be visible from many areas across the Space Coast, but there’s only one way to feel the rumble, experience the excitement and get up to date, minute-to-minute information from NASA TV, astronauts and space experts — and that’s at Kennedy Space Center Visitor Complex,” said Therrin Protze, chief operating officer of the Visitor Complex. “This is your chance to be part of history in the making and tell your kids and grandkids you were here when we achieved our first steps toward Mars.”

The Orion spacecraft and its United Launch Alliance (ULA ) Delta IV Heavy rocket are on track to lift off Thursday at 7:05 a.m. EST, the opening of a 2 hour, 39-minute window for the day. This article originally appeared on Astro Watch and can be viewed here: I’m On Board

If it isn’t big enough to send the entire Congress to Mars one way, it still isn’t adequate.

What is the cost to the taxpayers for Orion so far?

It is a monstrously huge financial rathole draining the future of spaceflight from the US. Fortunately private companies are planning to do the job.

Hi Yale,
You mean Private Companies like Orbital and Virgin Galactic? Sorry, but that extra funding is being used to ensure SLS/Orion don’t have incidents like we saw out of Antares & SpaceShipTwo.

No, I was specifically thinking of SpaceX.
Neither VG nor Orbital have had any plans for doing human spaceflight to LEO or above.
SpaceX in particular plan on having boots on the ground on Mars somewhere around 2026.

BTW, please explain what the $3 billion per year for Orion/SLS is being used for that prevents incidents?

To expand a bit, Virgin Galactic was a rich boys toy meant to do 15 minute thrill rides.
Orbital Sciences may have a role in another project as the rocket midstages of the Stratolaunch system, but Antares is just a medium payload lifter.

Boeing, Grumman, Bigelow, and others are planning for missions beyond Earth.

When are the manned missions again?? To where?

Yale,
You’re comparing apples to oranges, probably with full knowledge you’re doing it. Comparing a crew rated deep-space vessel and the launch system to fly it to craft only meant for LEO? Is like comparing a Cessna to the Stealth Bomber.

That’s why the programs cost are so different. Moreover, private companies haven’t launched a single person to orbit, but, to hear you tell it, they already got NASA beat.

What’ll likely happen when SpaceX has their own “bad day” is supporters will swing from “anything NASA can do SpaceX can do better…” to “space is hard, they’re new and need more time.”

Of course, considering you honestly believe SpaceX will send people to Mars in twelve years? It’s rather obvious anything I say will ignored in favor of some other example (rather than address the cold historical facts).

Do your research on what happened the first time we tried “better, faster, cheaper.” Then lets talk.

NASA has not designed a crewed spacecraft capable of launch and recovory in 40 years.
“a crew rated deep-space vessel”. No it isn’t. Flyable with a crew is a decade away. Built as planned, the Orion crewed vehicle won’t work. With crew accommodations including environmental systems and other flight needs puts the Orion crew capsule (not the service vehicle which is also overweight) 2 tons OVER the MAXIMUM possible parachute capability. NASA has no path to trim that weight except to see if the overbuilt the stripped down craft flying Thursday.

Dear Yale,
One of the things we do at SpaceFlight Insider – is take comments / questions – directly to the officials who can assess/answer them. Given your statements didn’t sound accurate? We took them to NASA’s Orion Program Manager – Mark Geyer. He stated your comments on Orion’s weight as well as the first flight being in 2024 – are incorrect. According to Geyer,the EM-1 Orion is 25 percent lighter than the one flying tomorrow and Orion’s design – is dictated by the amount of weight that Orion’s parachutes can support. Secondly, Orion’s first crewed flight = 2021. Review the Dec. 3, news conference for factual data.
Jason Rhian – Editor, SpaceFlight Insider

Please answer with budget line items my earlier question:
:BTW, please explain what the $3 billion per year for Orion/SLS is being used for that prevents incidents?”
What SPECIFIC things is the 10’s of billions of dollars going to buy?

Right on Infidel,
Space x pumps out a lot of hype that there gonna do this and that. But there’s no profit in certain types of exploration and this is where NASA will pave the way. I’m not saying NASA is this or that and so great. They have their problems as well, but as the educated know, the only way to pave this path is through NASA/government funded missions as SLS will eventually accomplish. May not be as quick as we would like, because it is expensive, but well worth the investment.
And contrary to what the xer’s believe, there is tremendous support behind SLS. Every Hotel/Motel in the central Florida area is sold out for this launch.

Every time we say “NASA funded” or “government funded” we need to remember that we are really saying “taxpayer funded” and there are a lot of taxpayers who wish they weren’t paying so much in taxes.

The wonderful thing about privately funded space ventures is that those people support them, do, and those people who either do not have the money or are not interested, are not forced to fund them.

The more we can fund privately the better off everyone is. There are some really good reasons to be proud of privately funded ventures like SpaceX.

Space x is not completely privately funded, if you knew anything about space x, you’d know they get paid by the tax payers for their launches.