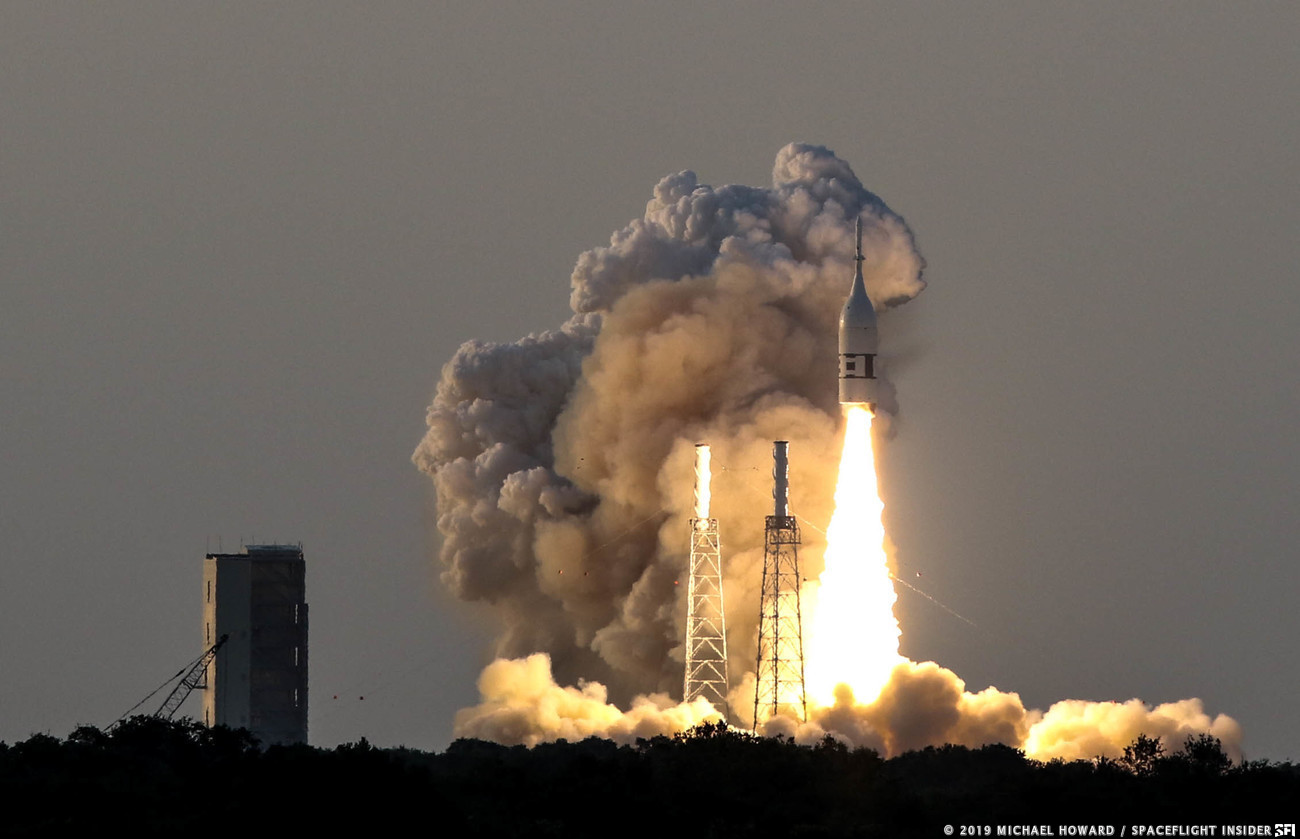 CAPE CANAVERAL, Fla. — Should NASA’s Orion spacecraft encounter a problem when it is used to send astronauts to the Moon one day, the system tasked with keeping them safe has proven it can do so. The test was dubbed – Ascent Abort 2.

It didn’t take long for NASA and Northrop Grumman, the manufacturer of the Peacekeeper missile used for this morning’s test, to complete the mission. The flight only lasted about three minutes. The “payload” that was launched at 7 a.m. EDT (11:00 GMT) was an Orion test article which was sent skyward from Cape Canaveral Air Force Station’s Space Launch Complex 46.

The test all boiled down to one moment – the abort. During this point of its flight the vehicle was traveling at some 1,000 mph. The Orion capsule was then pulled away from the modified Peacekeeper by launch abort motors, which generated an estimated 400,000 pounds of thrust. The abort system then reoriented itself using its attitude control motor and jettisoned Orion using its jettison motor. 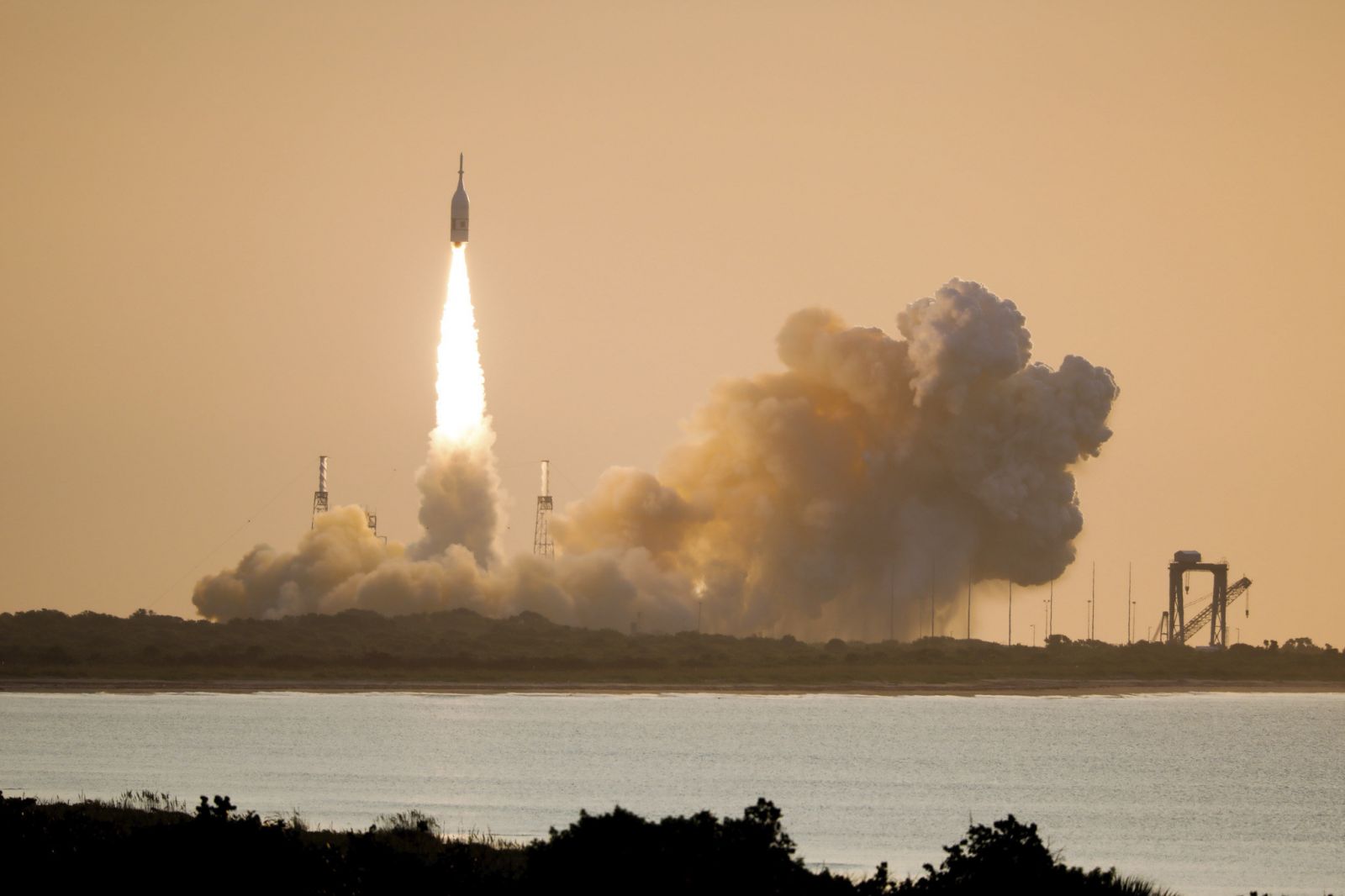 The AA-2 mission utilized a mockup of Orion, which flew to an altitude of about six miles. Photo Credit: Lockheed Martin

“The test flight performed perfectly, not to mention it was really exciting to watch,” said Mike Hawes, Orion program manager for Lockheed Martin Space. “Hopefully this will be the last time we see this launch abort system ever work, but this test brings confidence that if needed on future Orion missions, it will safely pull the crew module and astronauts away from a life threatening event during launch.”

The vehicle wasn’t bound for the Moon or even to orbit for that matter. In fact it only reached an altitude of about six miles (almost 10 kilometers) less than one-tenth the distance required to cross the Kármán line, the altitude where space begins. That height however did place it in a region where it encountered “high-stress aerodynamic conditions” that Orion should encounter when launched. 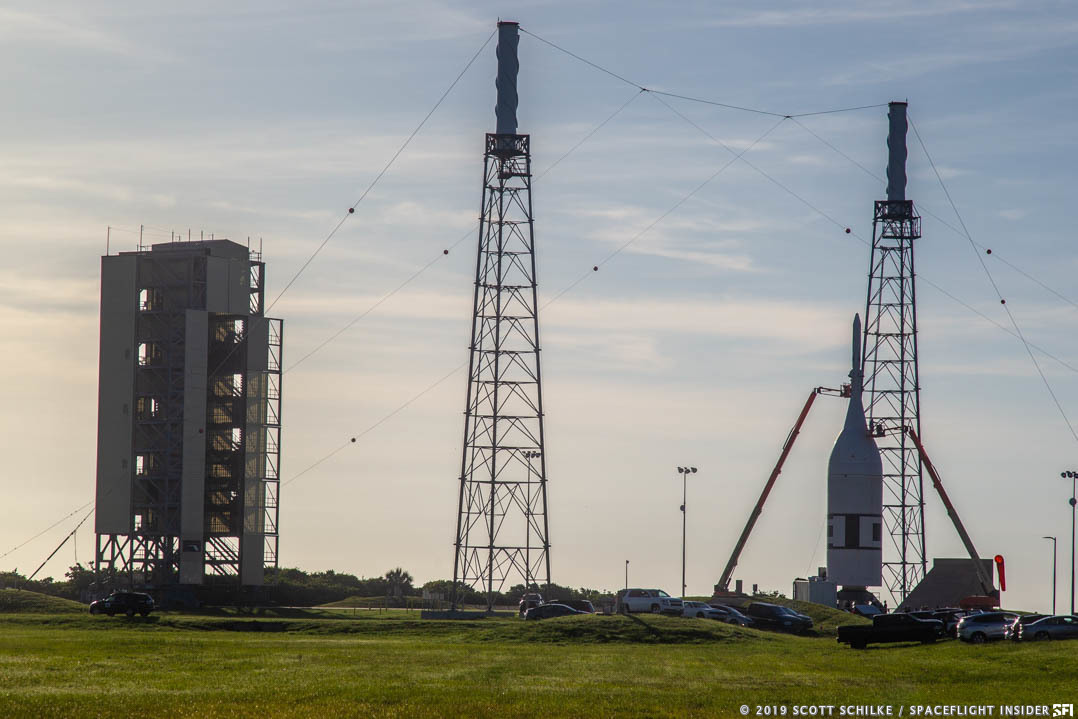 The vehicle used for this morning’s test consisted of a Northrop Grumman Peacekeeper missile and a test article of the Orion spacecraft. Photo Credit: Mike Howard / SpaceFlight Insider

During this morning’s test, an abort was conducted and resulted in a successful demonstration of Orion’s abort system. According to NASA: “The abort sequence triggered and, within milliseconds, the abort motor fired to pull the crew module away from the rocket. Its attitude control motor flipped the capsule end-over-end to properly orient it, and then the jettison motor fired, releasing the crew module for splashdown in the Atlantic Ocean.”

Twelve data recorders were ejected as the capsule descended down to the Atlantic. Engineers will now study that information and determine what changes, if any, need to be made. 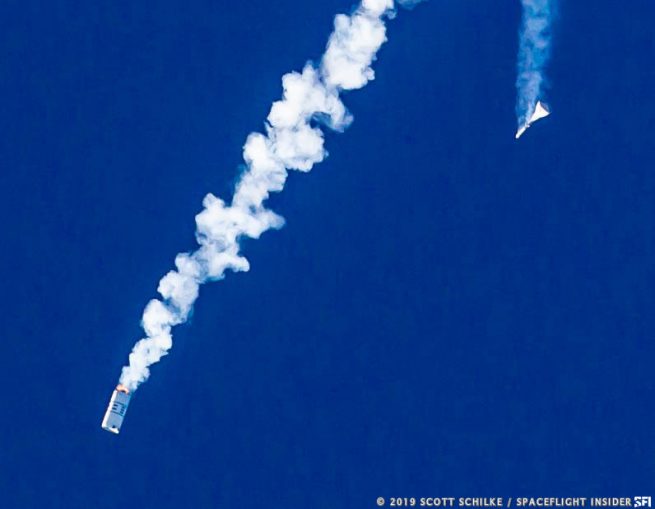 The booster and Orion spacecraft separated at an altitude of about 6 miles (about 10 kilometers). Photo Credit: Scott Schilke / SpaceFlight Insider

The “stack”, the combined booster and spacecraft used during the July 2 test, is comprised of the following:

The tower-like abort structure consists of two parts: the fairing assembly, which is a shell composed of a lightweight composite material that protects the capsule from the heat, air flow and acoustics of the launch, ascent, and abort environments; and the launch abort tower, which includes the abort motor, attitude control motor, and jettison motor.

“Launching into space is one of the most difficult and dangerous parts of going to the Moon,” said Mark Kirasich, Orion program manager at Johnson Space Center in Houston. “This test mimicked some of the most challenging conditions Orion will ever face should an emergency develop during the ascent phase of flight. Today, the team demonstrated our abort capabilities under these demanding conditions and put us one huge step closer to the first Artemis flight carrying people to the Moon.”

Orion was originally called the Crew Exploration Vehicle developed under President George W. Bush’s “Vision for Space Exploration.” When Barack Obama was elected, that initiative was cancelled with only the Space Launch System (formerly known as the Ares V) and Orion surviving. Upon President Trump’s election in 2016 as the 45th president of the United States a similar program was established under the Artemis Program.

Another Orion test article was launched on a three-orbit long, 3,604 mile (5,800 kilometer) high flight test  in 2014 on the Exploration Flight Test 1 mission.

“We’re building the most powerful rocket in the world to send astronauts to the Moon in the Orion spacecraft for Artemis missions,” said Bill Hill, deputy associate administrator for Exploration Systems Development at NASA Headquarters via an agency-issued release. “With this exploration system designed to safely carry humans farther into space than ever before, we’ll also have an equally powerful launch abort system that will pull the crew away if there is a problem with the rocket during the early portion of ascent.” 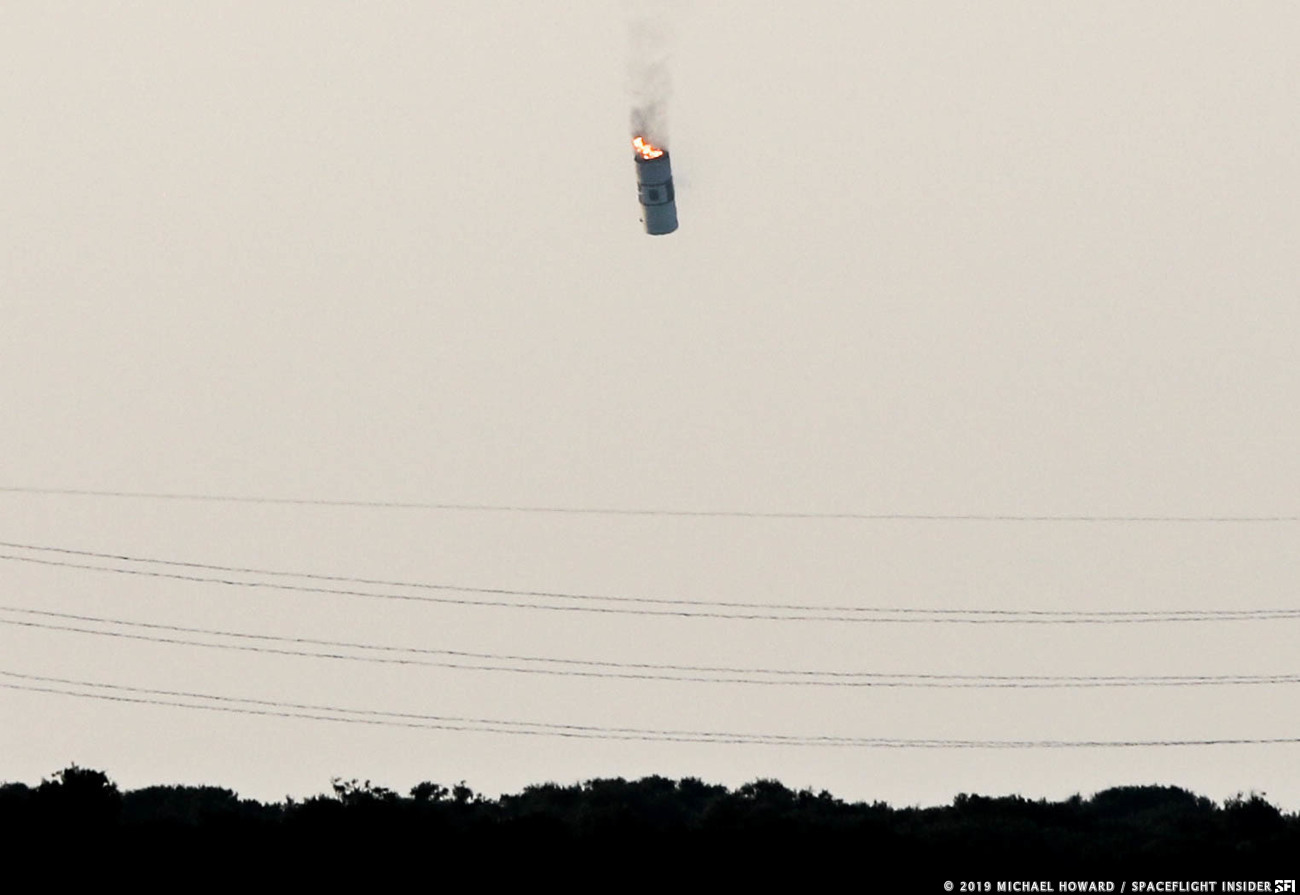 Watching the tower tumble away after pulling the capsule with 400,000 pounds of thrust at 7G’s was awesome. A far superior system to the hypergolic dual purpose systems found on the commercial crew LEO taxis. We are going!