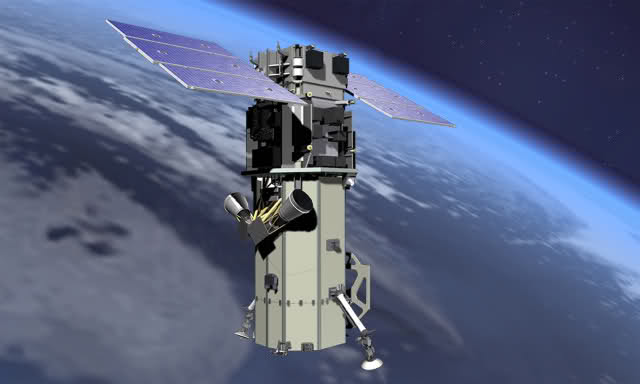 DigitalGlobe, a publicly traded commercial satellite company, is about to send its latest high-resolution satellite, WorldView-3, into orbit. A United Launch Alliance (ULA ) Atlas V 401 rocket is scheduled to carry the payload from Space Launch Complex 3 (SLC-3E) at Vandenberg Air Force Base in California on Wednesday, on August 13. The 15-minute launch window will open at 11:30 a.m. PDT (18:30 GMT, 2:30 p.m. EDT).

WorldView-1 launched in September of 2007 and operates at an altitude of about 308 miles (496 kilometers ) with a revisit time of 1.7 days. It’s capable of collecting more than 1.5 million square kilometers of imagery per day. WorldView-2, the first high-resolution 8-band multispectral commercial satellite, launched two years later in October of 2009. It operates at an altitude of some 478 miles (770 kilometers ) with an average revisit time of 1.1 days, collecting up to 1.2 million square kilometers worth of imagery per day. The new WorldView-3 satellite, built by Ball Aerospace, is the first multi-payload, super-spectral, high-resolution commercial satellite for earth observations and advanced geospatial solutions. It is planned to operate at an altitude of 383 miles (617 kilometers), which, according to DigitalGlobe’s blog, “is the same as the distance between Southern California’s Hollywood sign and the Golden Gate Bridge in San Francisco,” a significant comparison because “if the imagery were located at the Hollywood sign, users would be able to count all of the people on the Golden Gate Bridge.”

This new satellite will have an average revisit time of less than one day, and will be capable of collecting up to 230,000 square miles (680,000 square kilometers) of imagery daily. Though it seems at first glance like each WorldView satellite collects less data than the previous one, each satellite actually captures images with much better resolution and using more sensors than the previous satellite.

“Our experience building spacecraft for DigitalGlobe has allowed for quick progress on WorldView-3,” said Cary Ludtke, vice president and general manager of Ball’s Operational Space business unit. “WorldView-3 will be a highly-capable spacecraft based on a low risk design with proven results. We’re eager for it to join DigitalGlobe’s growing constellation.”

For comparison, WorldView-2 could only provide 46 centimeter panchromatic resolution and had a 184-centimeter multispectral sensor. The CAVIS instrument is also new, as it is the first atmospheric sounder on a DigitalGlobe satellite. According to Ball Aerospace’s website, it “will enable WorldView-3 to collect scientific data based on ground reflection by correcting images for atmospheric interference.” The launch of the Atlas V 401 which will carry the WorldView-3 spacecraft aloft will launch from Vandenberg Air Force Base in California. Photo Credit: Airman 1st Class Christian Thomas / USAF

The extremely high resolution images from WorldView-3 would have been useful to only one of DigitalGlobe’s major customers, the U.S. government, until recently. Before June of this year, the U.S. government restricted satellite companies from selling images to foreign or commercial organizations if they showed features smaller than 50 centimeters.

Now, however, DigitalGlobe will be able to sell WorldView-3’s 31-centimeter-resolution images to companies like Google, for applications like Google Earth, or Microsoft, after the satellite has been operational for six months. The decision also allowed the company to immediately begin selling better images from their existing satellites. Google did purchase satellite company Skybox for $500 million shortly after that decision was made, but if DigitalGlobe’s latest technology is able to provide crisper images, they may still have a market with the search giant.

The satellite has a planned lifetime of about 7.5 years, during which it will have applications like “civil government mapping, land-use planning, disaster relief, exploration, defense and intelligence, and visualization and simulation environments,” according to Ball’s website. WorldSpace-3 is a remote-sensing spacecraft which will provide high-resolution imagery of the planet’s surface. Photo Credit: Ball Aerospace

An Atlas V 401 launch vehicle from ULA will carry the payload. The 401 designation specifies that this rocket has a 4-meter-diameter payload fairing, no solid rocket boosters, and one engine on the Centaur upper (second) stage.

The first stage of every Atlas V rocket relies on the Russian-built RD-180 engine from NGO Energomash, which will provide more than 860,000 pounds of thrust at liftoff. The Atlas V has been a reliable rocket since its debut in 2002, but recent turmoil over Russia’s military actions in the Ukrainian Republic of Crimea has sparked a push for ULA to find an American replacement for the Russian engine. Though ULA has not severed ties with NPO Energomash, Russian Deputy Prime Minister Dmitry Rogozin has stated that his country would cease participating in the International Space Station (ISS) by 2020 and has banned the use of RD-180 and NK-33 (AJ-26) engines for Department of Defense missions.

The RL10A engine in the Centaur stage of the Atlas V, however, is all-American, built by Aerojet Rocketdyne (formerly Aerojet and Pratt & Whitney Rocketdyne before they merged). The liquid-fuel cryogenic rocket engine is also used on the Delta IV and was the first liquid hydrogen rocket engine built in the United States, with its first successful flight in 1963. It has a nominal thrust of 23,300 pounds, which will propel the WorldView-3 satellite into its proper sun-synchronous orbit. ULA’s latest weather update for tomorrow’s launch expects a 40 percent chance of favorable weather. The Launch Readiness Review has met and confirmed that the mission is ready to proceed. If all goes according to plan, “go for launch” will be declared immediately before a scheduled hold at T-4 minutes, authorized by the launch director. After those last four minutes of the count are allowed to pass, the RD-180 engine will roar to life, just seconds after sound-suppressing water floods the pad and just seconds before the rocket is released.

About four minutes into flight, BECO, or booster engine cutoff, will occur, and the first stage will be jettisoned. At this point, the Centaur will take over. Its RL10A engine will use a single burn to bring the payload into its proper place. The payload fairing will be jettisoned at the beginning of the burn, and after the Centaur brings the payload to the correct location, the satellite will be released. WorldView-3 is planned to take its place in orbit at about 19 minutes into flight.

This launch will be the 10th of 15 missions ULA has planned for 2014, and ULA’s 86th since the company formed in 2006. They launched the GPS IIF-7 satellite less than two weeks ago, also aboard an Atlas V, and the AFSPC-4 mission just days before that on a Delta IV. Their next scheduled launch after WorldView-3 is the CLIO mission, a highly classified satellite that was apparently ordered by a U.S. government agency, set for September 26 from Cape Canaveral. It, too, will use an Atlas V401 rocket to bring its classified payload into orbit.