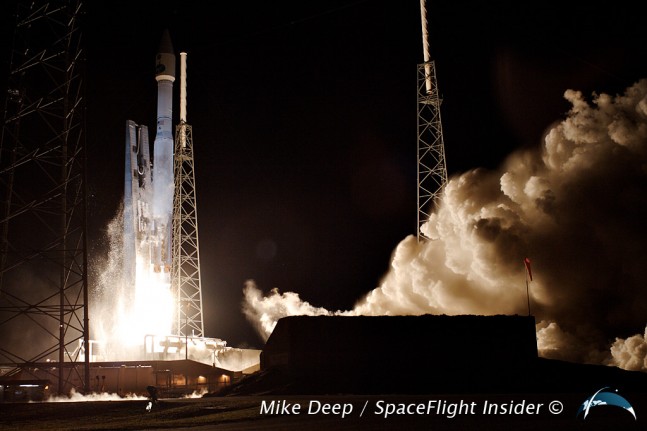 CAPE CANAVERAL, Fla – NASA and United Launch Alliance (ULA) launched the second in a planned series of three space communications satellites from Cape Canaveral Air Force Station’s Space Launch Complex 41 (SLC-41) in Florida at 9:33 p.m. EST (02:33 GMT). The launch of Tracking and Data Relay Satellite L (TDRS-L) marks the continuation of a long history of these spacecraft which have supported NASA’s crewed and uncrewed missions for more than three decades. The launch was delayed some 28 minutes due to a data drop out between TDRS-L and Hangar AE hardlines. Engineers spent several tense minutes determining what the problem was before the new T-0 was set and the launch proceeded forward.

Despite a cold front which blew into Florida’s Space Coast earlier in the week, the conditions for launch were optimal with clear skies beaconing the rocket upward. As there were no solid rocket boosters affixed to this version of Atlas, the rocket lifted off of the launch pad in a slow, languid manner. A few seconds after liftoff, the roar of the RD-180 engine could be heard as it shook the ground, announcing that it was aloft.

Seventeen seconds into the flight, the Atlas V conducted a pitch / yaw roll maneuver. Less than a minute later and the rocket entered what is known as “Max-Q” – this is the point of flight where atmospheric pressure and the speed of the launch conspire against the launch vehicle. As such, speed is usually reduced at this point.

The Atlas booster engine cutoff or “BECO” took place at about 9:37 p.m. EST (02:37 GMT). Six seconds later, the Centaur upper stage and TDRS-L, still encapsulated in its protective fairing, separated from the Atlas booster – which then began its slow descent back to Earth. Eighteen seconds after first stage separation, the fairing, which had completed its role of protecting TDRS-L through the atmosphere was jettisoned as well.

Approximately one hour and 46 minutes after launch, spacecraft separation occurred.

This evening’s liftoff of the TDRS-L spacecraft marks a continuation for the TDRS program. A similar launch was conducted on Jan. 30, 2013 to send the TDRS K spacecraft to orbit – beginning the third generation of these satellites. The contract to produce the current iteration of TDRS was awarded to Boeing in December of 2007. The main distinguishing feature between the second and third generation iteration of these spacecraft is that second gen TDRS satellites is described by NASA as:

The primary difference between the Second Generation and the Third Generation is the shift from on-orbit beamforming of the S-band Multiple Access Return services to Ground Based beamforming (GBBF) (a return from spacecraft onboard beamforming to the first generation architecture). As this iteration of Atlas has no solid rocket boosters, its long arc to orbit took longer than other launch vehicles. This provided photographers with ample opportunity to record its journey. Photo Credit: Mike Deep / SpaceFlight Insider

The TDRS system has proven to be incredibly reliable. During an interview conducted a few hours prior to launch, NASA’s Deputy Associate Administrator for Space Communications and Navigation (SCaN) Badri Younes described the fleet’s reliability as such:

“If it wasn’t for the dedication and the talent that we have in our operators and our technicians, we would have failed to provide the service that we’re providing today at a proficiency higher than 99.99 percent – that is better than AT&T!” TDRS-L is part of a trifecta of NASA’s space communications satellites. The third, TDRS-L is scheduled to launch in 2015. Photo Credit: Mike Howard / SpaceFlight Insider

If everything continues apace, NASA and ULA will launch the TDRS M spacecraft in 2015. If needed, the contract signed between NASA and Boeing allows for another satellite, TDRS-N, to be produced. These spacecraft provide tracking, telemetry, command and high-bandwidth data return services.

TDRS spacecraft have an array of antennas which are capable of sending and returning data to and from a variety of destinations – simultaneously. This is accomplished via microwave communications equipment within these later-generation spacecraft themselves. TDRSS provides communications services via the S, Ku and Ka-band for low-Earth-orbit (LEO) spacecraft as well as launch vehicles. NASA uses them for both the International Space Station as well as the Hubble Space Telescope.

According to NASA’s Director of Network Services for SCaN – Pete Vrotsos, some 16 different missions currently rely on TDRS for their communications requirements.

The TDRSS, also called the NASA Space Network, is a constellation of satellites located in geosynchronous orbit with a ground control station located at White Sands, New Mexico and Guam.

The iteration of the Atlas V used to launch TDRS-L, is the workhorse of ULA’s fleet. It had no solid rocket boosters, a four-meter fairing and a single, Centaur engine located in the rocket’s upper stage. All total, the first stage of the rocket is about 12-and-a-half feet (3.81 meters) in diameter and almost 107 feet (33 meters) tall. In addition, there is the second stage, which is approximately 10 feet (3 meters) in diameter and 41 and-a-half feet (13 meters) tall. This makes the Atlas V 401, when fully-stacked with both stages, and payload fairing some 192 feet (59 meters) tall.

The inside of the rocket is a network of fuel tanks, avionics and wiring. There is, in actuality, only a single RD-180 engine in the Atlas’ first stage (it has two thrust chambers). This Russian-built engine burns RP-1, a highly-purified form of kerosene and oxygen. This combination provides the Atlas launch vehicle with an estimated 820,600 lbs of thrust at sea level. If all continues to go as planned, the next spacecraft in this series, TDRS-M will launch in 2015. Photo Credit: Carleton Bailie / SpaceFlight Insider

The Centaur upper stage, which pushed TDRS-L (now known as TDRS-12) the remainder of the way to its destination, used a single RL10A-4-2 engine to do so. This engine grants Centaur some 22,300 lbs of thrust.

During the first and second stages of flight, Atlas utilizes onboard avionics which controlled the rocket’s various actions.

“Atlas and TDRS have supported each other for almost 20 years, and all three of the second generation satellites, now known as TDRS 8, 9, and 10, launched on Atlas vehicles in 2000 and 2002,” said ULA’s Vice President Jim Sponnick. “While we were integrating those spacecraft onto Atlas in the late 1990s, we also developed a new TDRS-compatible transmitter so that Atlas could use the TDRS constellation to receive and distribute the launch vehicle telemetry relay during flight. We are now also using TDRS services for our Delta II and Delta IV programs.”

ULA had 40 minutes within this evening’s launch window in which to get TDRS-L off the pad, but managed to do so at the opening of the window. The launch of TDRS-L marks the first ULA has conducted in 2014, with 11 more currently on the launch manifest. The launch of TDRS-L strengthens the more than 30 year legacy of the TDRS program. Photo Credit: Mike Deep / SpaceFlight Insider