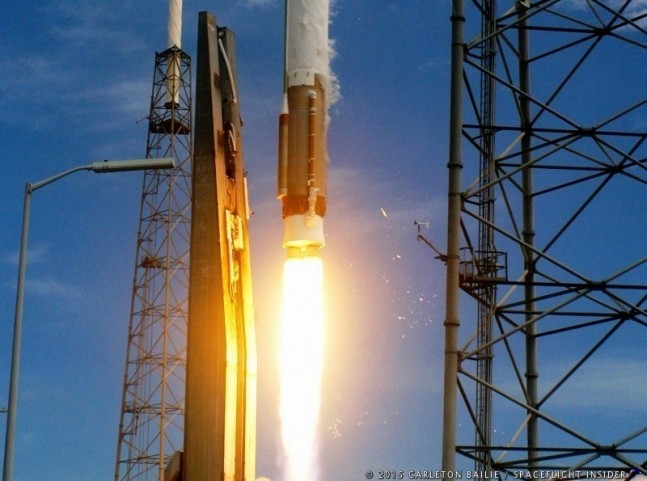 CAPE CANAVERAL, Fla — Weather was a concern the day prior to this morning’s launch with a brief shower blowing through Cape Canaveral in the early afternoon hours on July 14. The wet weather passed by and it was clear that Colorado-based United Launch Alliance (ULA ) would likely have no problems in getting the venerable Atlas V 401 booster off the pad and into the sky. That is exactly what happened at the very opening of a 19-minute long launch window on Wednesday, July 15.With flame and thunder, the 401 version of the Atlas V rocket lifted off from Cape Canaveral Air Force Station’s Space Launch Complex 41 (SLC-41) in Florida at 11:36 a.m. EDT (15:36 GMT) – at the very opening of the 19-minute long launch window. Under partly cloudy skies, with a steady breeze, the Atlas V launch team sent the rocket rumbling aloft a short while after “green board” was called. The weather was noted by one member of those viewing the launch with particular interest.

“I loaded this weather up, put it in a carry-on and got it here,” said Orbital ATK’s Senior Communications Manager Bryan Warren about the skies overhead.

As is the case with this version of the booster, the rocket slowly lifted its precious cargo off of the launch pad and into the muggy Florida sky at a very languid pace.

The “401” nomenclature that follows the rocket’s designation means that the GPS IIF 10 satellite was enshrouded in a four meter fairing, used no solid rocket boosters on its first stage, and employed a single, RL10C-1  engine in its Centaur upper stage.

“We produced the composite thermal shield down at the bottom of the rocket, when we say composites, that’s carbon fiber […] which is down around the engine nozzles where a lot of the heat is, this component can withstand upwards of about 4,000 degrees Fahrenheit,” Warren told SpaceFlight Insider. “This protects the rocket from all the heat that builds up throughout the launch.”

The first stage used the RD AMROSS-built RD-180 engine, which had its thrust channeled through two thrust nozzles, which gives the appearance that the rocket actually has two rocket engines in its first stage. The Russian made RD-180 has been a source of controversy ever since the 2014 Russian military actions in Ukraine. An alligator stalks the salty marshes near SLC-41 prior to the July 15 launch of GPS IIF 10. Photo Credit: Carleton Bailie / SpaceFlight Insider

Tanking, the process of fueling the Atlas V, was somewhat delayed on July 14, due to the inclement weather that pass over the Space Coast region.

With the flight of the GPS IIF-10 satellite, some 55 Atlas V rockets have been sent aloft since the booster was first launched in 2002. Today’s launch was the 27th flight of the 401 configuration of the iconic rocket. Every operational GPS satellite has taken to the skies either via a ULA or heritage booster. Although primarily used for navigational purposes by the United States military, the Global Positioning System is also utilized by the public as well to help provide data regarding speed, location, and time for users traveling on land, on water, or in the air.

Described by ULA as being one of the next-generation GPS satellites that will enhance accuracy, the fleet of twelve planned satellites is actually an interim constellation that will help bridge the gap until the Block IIIA satellites can enter into service.

If everything continues to go according to plan, the remaining two Block IIF GPS satellites that need to be deployed should be in orbit by the start of 2016.

United Launch Alliance has little time to rest, however. On July 22, the company is set to launch one of the aerospace firm’s Delta IV Medium rockets with the seventh Wideband Global SATCOM spacecraft.

“Congratulations to the U.S Air Force and the entire mission team on today’s successful launch of the 10th GPS IIF satellite! In just a few days, on July 17, the Global Positioning System will celebrate the 20th anniversary of GPS achieving fully operational status,” said Jim Sponnick, ULA vice president, Atlas and Delta Programs. “ULA is very proud to play a role in delivering these satellites to orbit, with Atlas and Delta rockets having launched all 58 operational GPS satellites.”