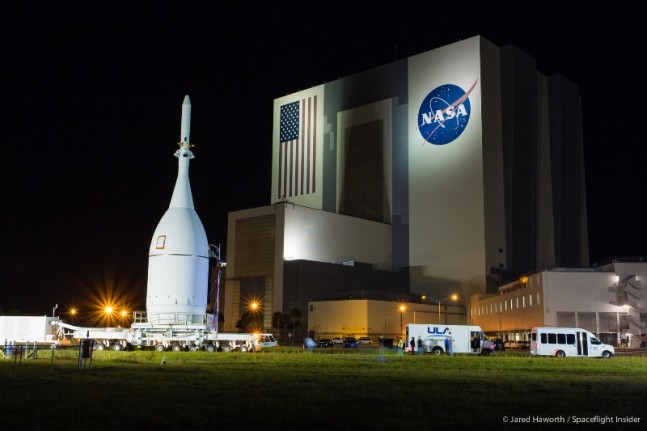 KENNEDY SPACE CENTER. Fla — NASA’s new Orion Multi-Purpose Crew Vehicle (MPCV) spacecraft was rolled out of the Launch Abort System Facility (LASF) on Tuesday, Nov. 11 for the last Earthbound leg of its journey to space. That journey – came a day later than planned. Heavy wind and rains besieged KSC in the lead up to rollout on Nov. 10, forcing a change to the schedule by 24 hours. On Tuesday however, clear, cool skies greeted the move and Orion’s NASA and Lockheed Martin handlers started the move with no issues.

First motion of the test article of NASA’s new crew-rated spacecraft took place at 8:55 p.m. EDT (0055 GMT). Throngs of NASA civil servants, contractors and the media greeted the capsuled-based craft as it rolled out into the cool night air.

After pausing briefly in front of the Vehicle Assembly Building (VAB) for a photo opportunity, Orion ended its trip at Cape Canaveral Air Force Station’s Space Launch Complex 37 (SLC-37). Awaiting Orion at SLC-37 is the United Launch Alliance (ULA ) Delta IV Heavy launch vehicle, which was transported out from the Horizontal Integration Facility (HIF) and was raised to a vertical orientation on the launch pad on Oct. 1, 2014. With this milestone complete, the first flight of Orion is just over three weeks away. Tonight’s trip covered approximately 22 miles on top of the 36-wheeled “Kamag” transporter and lasted longer than the actual mission it will carry out (Orion’s first flight is expected to last four and one half hours).

The craft took a rather circuitous path, rolling past KSC’s Launch Complex 39B. This was undertaken due to an issue with the road – which could not support the stack of Orion and its transport vehicle.

One of the design engineers on hand described the event as an emotional one, almost like sending off one of her children.

The assembly of escape tower, shrouded Orion spacecraft, service module and mating ring sat in the lights from the open high bay door.  The stack is about 72 feet tall and the platform on the Kamag transporter was almost 8 feet above the road, making a load almost 80 feet high.

Attached to the rear of this rig was a trailer with a large duct attached to the base of the stack, and an engine running.  Astronaut Rex Walheim explained that this is a purge system for Orion.

At 11 p.m. EDT (0300 GMT), as Orion made the turn to approach the VAB, it was preceded by numerous escort and security vehicles.  Watching it slowly progress toward the press site it would eclipse the streetlights until it finally halted.  After NASA and ULA took their official pictures one could watch those same people pull out their cell phones for ‘selfies.’

Orion has moved internally at Kennedy Space Center two previous times; once after mating with the service module in the Neil Armstrong Operations and Checkout Building to the Payload Hazardous Servicing Facility; then again from the PHSF to the LASF, to be mated with the abort system it will carry on Exploration Flight Test 1 (EFT-1 ). Initial components were brought from the Michoud Assembly Facility where the final welds of the pressure vessel were completed this past June. This final, flight-ready configuration includes the Launch Abort System with associated shroud, the Orion spacecraft itself, the service module and the adapter ring which will match the Delta IV launch vehicle. The Launch Abort System (LAS) is a new design provided by ATK.

The rollout is more complicated than simply traveling across the space center to SLC-37. The spacecraft has to avoid corrosion and contamination threats prior to the actual mating with the Delta launch vehicle. A dry gas had to be pumped into the space between the capsule and the shroud or ogive around it. This will prohibit moisture accumulation which could potentially cause contamination or corrosion. On Monday afternoon, NASA and Lockheed Martin held a joint news conference at the LASF, to talk about the Orion Spacecraft and EFT-1 mission. The EFT-1 Orion prior to its rollout. Photo Credit: NASA

Orion’s first mission – will be just two orbits reaching an altitude of 3,600 miles (5794 kilometers), approximately 15 times farther out than standard low-Earth orbit. EFT-1 will be an unmanned test of several systems, but most importantly the high speed reentry and it’s effects on the heat shield.

During re-entry the craft will reach speeds of 20,000 miles (32,187 kilometers) per hour and will encounter temperatures near 4,000 degrees. For comparison, the temperature of lava is approximately 2,200 degrees fahrenheit and titanium melts at 3,000 degrees. Other tests included in this mission will include separation events, avionics and software performance, attitude control and guidance, parachute deployment and recovery.

Over the next few weeks the Orion Spacecraft, along with its launch abort tower and service module will be mated to ULA’s Delta IV Heavy rocket with launch currently planned for no-earlier-than (NET) Dec. 4 at 7:05 a.m. EDT (1105 GMT).

“Orion represents the latest human-rated spacecraft that Johnson Space Center has had the privilege of developing,” Ochoa said. “This initial test flight, which focuses on some of the highest risks to bringing the crew back safely from exploration missions – is really important to us.”

Geyer reinforced Ochoa’s comments regarding the crucial lessons that EFT-1 will impart upon the space agency. “Orion is the exploration spacecraft for NASA and when paired with SLS (NASA’s new heavy-lift booster – the Space Launch System) we’ll go explore the solar system. This particular test is unmanned, EFT-1, and we’re going to test, really I would say, the riskiest parts of the mission in ascent and entry. Things like the fairing separation, heat shield, parachutes, entry, guidance and navigation – those kind of things,” Geyer said. The mating operations at SLC-37 will involve raising the spacecraft 170 feet (52 meters) into the air and placing it precisely atop the launch vehicle.

Later, manned flights of the Orion spacecraft will be atop NASA’s new heavy-lift booster, the Space Launch System or “SLS” as it is more commonly known. A fact Cabana touched on when addressing a member of the media asking if this view will become one the public will soon see more of.

While this version of the spacecraft will be outfitted with test equipment, future configurations will be capable of carrying 4 to 6 crew members – for periods of up to 21 days.

“This is the next step on our journey to Mars, and it’s a big one,” said William Gerstenmaier, NASA’s associate administrator for human exploration and operations. “In less than a month, Orion will travel farther than any spacecraft built for humans has been in more than 40 years. That’s a huge milestone for NASA, and for all of us who want to see humans go to deep space.”

This capsule will also be “recycled”and used for the next mission, Ascent Abort 2, which will be a test of the Abort system as the launch vehicle reaches the region of maximum dynamic pressure, or max q, when the vehicle is approaching Mach-1. This test is currently slated to take place in 2018 at Cape Canaveral’s SLC-46. As it is just a test of the abort system, Orion will need to get a far shorter distance off the ground and will use a SR-118 PeaceKeeper first stage as its launch vehicle. After completing the two orbits Orion is planned to land in the Pacific where the Navy will recover it. Recent exercises to practice the recovery involved one of the new LPD ships with a helicopter deck and a wet deck where the capsule will be towed aboard.

NASA and Lockheed Martin representatives detailed that they already had learned a great deal about Orion, but that EFT-1 could serve as a game-changer in terms of what is known about the spacecraft’s capabilities.

Let’s get this baby mated & launched. I don’t want to hear all this hoopla about how expensive it is. The previous Presidents & Congresses have wasted a hundred times more money than will be spent on this system. Let’s get going.