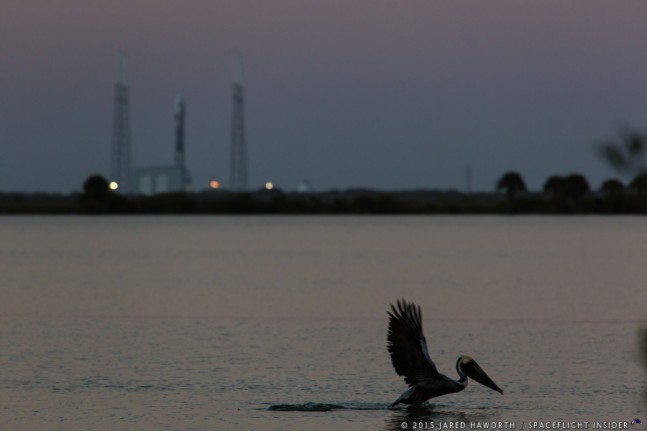 CAPE CANAVERAL, Fla — Hawthorne, California-based Space Exploration Technologies (SpaceX ) was just two minutes and 27 seconds prior to having one of the company’s Falcon 9 v1.1 rocket launch with the National Oceanic and Atmospheric Administration’s (NOAA) Deep Space Climate Observatory (DSCOVR ) – when tracking issues caused the attempt to be scrubbed. Initially poised for launch at 6:10 p.m. EST (2310 GMT) the launch has now been rescheduled for no-earlier-than (NET) Feb. 9 at 6:07 p.m. EST (2307 GMT). DSCOVR will monitor conditions on Earth from a distance of some 1 million miles. Photo Credit: NASA

The weather conditions simply could not have been more perfect with a rare 100 percent chance of favorable conditions for launch being issued. However, range safety (tracking) issues cropped up and tonight’s launch attempt was scrubbed.

DSCOVR will maintain the nation’s solar wind observations, which are critical to maintaining the accuracy and lead time of NOAA’s space weather alerts and forecasts. DSCOVR is a partnership between NOAA, NASA and the U.S. Air Force (USAF).

DSCOVR (formerly known as Triana) was originally conceived in the late 1990s as a NASA Earth science mission that would provide a near continuous view of Earth and measure Earth’s complete albedo. Before the mission was cancelled, Triana was scheduled to fly on the ill-fated STS-107 flight of Columbia. The mission was canceled and the satellite was put into storage in 2001. NOAA and the USAF had DSCOVR removed from storage and tested in 2008, and the same year the Committee on Space Environmental Sensor Mitigation Options (CSESMO) determined that DSCOVR was the optimal solution for meeting NOAA and USAF space weather requirements.

“Space exploration is hard and tonight’s events proved that well-established fact out,” said NASA’s Michael Curie. “We’ll circle back and try to get this mission off of the pad tomorrow.” “CAPE CANAVERAL, Fla – SpaceFlight Insider has received a report that NASA’s launch of the Deep Space Climate Observatory (DSCOVR ) mission has slipped to no-earlier-than (NET) Feb. 9, 2015. No details have been released as to the cause of the delay or at what time that the launch will take place. A SpaceX Falcon 9 v1.1 rocket has been tapped to launch the DSCOVR mission from Cape Canaveral Air Force Station’s Space Launch Complex 40 (SLC-40) in Florida.” Good call, SpaceFlight Insider, a bit spooky.

This article is too brief. Needs more explanation of what the tracking problems.