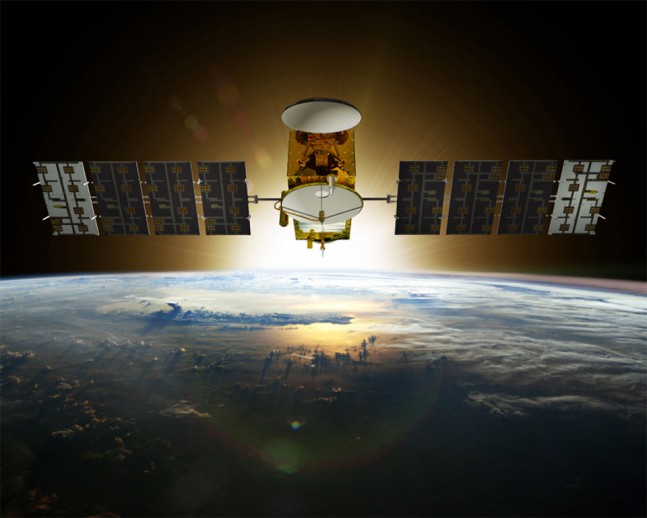 The launch of NOAA's Jason-3 satellite has been delayed due to contamination discovered in one of the spacecraft's four thrusters. Image Credit: National Oceanic and Atmospheric Administration

Wanting to ensure the National Oceanic and Atmospheric Administration’s (NOAA ) Jason-3 global sea surface-observing satellite was indeed ready for fight, mission planners have opted to push back its July 22, 2015 launch. With one of the four thrusters on the spacecraft found to be contaminated, the launch of a Space Exploration Technologies (SpaceX ) Falcon 9 v1.1 from Vandenberg Air Force Base in California will have to wait a while longer. The mission will be delayed until an, as yet, undetermined time, with the intervening period used to allow engineers to have the time needed to correct the issue. According to a report appearing on SatNews, the problem was discovered during spacecraft testing, where engineers found contamination in one of the spacecraft’s four thrusters. That thruster has since been replaced. Over the course of the next two weeks, an investigation will be held to determine where the contamination came from and the new thruster will be tested. After the outcome of the thruster’s review, a new launch date should be announced. For SpaceX, this mission marks the second time that the NewSpace firm has launched from its Space Launch Complex 4E facilities (the first being the CASSIOPE mission launched in September of 2013). Jason-3 will provide data regarding to hurricane intensity forecasting, El Niño and La Niña forecasting, as well as wave and coastal forecasting, and other information pertaining to oceanic conditions.

Hello Franklin,
I’m uncertain what your comment means. We posted this article last June, with the next one, a pre launch review, slated to come out in the next few days.
Sincerely, Jason Rhian – Editor, SpaceFlight Insider

Hi Franklin,
How nice for you! SpaceFlight Insider’s VAFB correspondent will be attending the Jason-3 launch and we hope to bring you some great images from the flight. NASA is currently looking at a partnership with ESA and others for crewed flights to Mars some time in the 2030s. I haven’t seen any official statements that the mission would cost a “trillion” dollars – can you provide a source?

Also, you should probably review our commenting rules, we generally don’t allow self-promotion or spam on SFI.