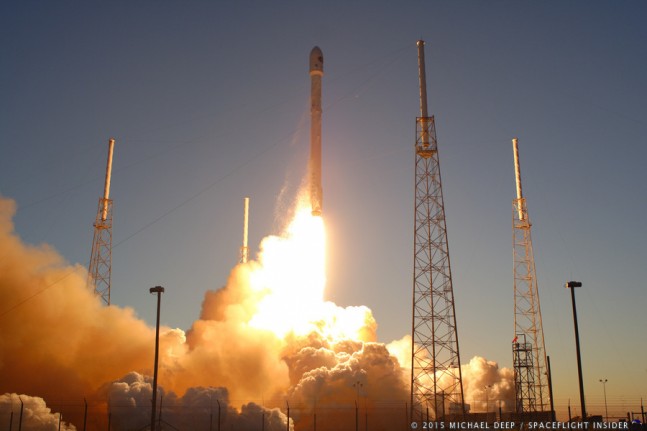 Falcon’s tail as it ascends through the sky. Photo Credit: Jared Haworth/Spaceflight Insider

Three minutes in to the flight, Main Engine Cut Off (MECO) and first stage separation occurred and the second stage ignited for a 6 minute burn. The first of two Second Engine Cut Off (SECO-1) occurred 9 minutes after launch. DSCOVR then coasted until 6:35 p.m. EST (23:35 GMT) when the second stage’s engines were ignited for a two-minute burn. DSCOVR was deployed at 6:40 p.m. EST (23:40 GMT) to begin its journey to orbit.

The satellite is headed for the Lagrange 1 (L1) orbit, 930,000 miles from Earth. It will take 110 days to arrive at that point and then another 40 days for checkout before JASD turns the keys over to NOAA.

According to NOAA’s Dr. Tom Berger, “The DSCOVR satellite is like a “Tsunami buoy” almost a million miles from Earth to provide an early warning of incoming solar winds. The magnetic disturbance from a Coronal Mass Ejection (CME) will be travelling towards Earth at 1 million to 5 million miles per hour.” Berger continued, “Depending on the speed of the incoming disturbance, the early warning can be 15 minutes to an hour. Industries primarily concerned with Solar wind are airlines flying over the north pole, pipeline operators, and electric utility companies in northern countries. The disturbance tends to be attracted to the magnetic north of the Earth. Two recent power outages happened in Quebec in 1989 and Sweden in 2002.”

NOAA confirms that the solar flare detection systems on DSCOVR are identical to the ACE Satellite that has been in operation since 1997. ACE is aging, now long-past its intended five-year mission. However, NASA expects ACE to continue sending data until 2023. The DSCOVR satellite is slated to last at least 2 years, possibly five. DSCOVR has a long history, according to JASD’s Steven Clarke. “The satellite was originally built as Triana during the Bill Clinton administration. But Triana was cancelled and placed in storage in a clean room in Bethesda, Maryland. When NOAA began talking about need a satellite to replace ACE, NASA suggested refurbishing and upgrading Triana. When we pulled the satellite out of storage, we found it to be in amazing condition. NASA took the lead on upgrading some of the systems and will hand control for the satellite over to NOAA after it reaches L1 orbit.”

While the solar-facing side of DSCOVR is nothing new, two instruments on the back of DSCOVR will study Earth. Steven Clarke explains, “There are two secondary missions for DSCOVR. The EPIC camera will be able to take images of the entire sunlit disk of the sun. Each day, 4 to 6 images will be downloaded to a ground station in Wallops Island, Virginia and posted on the Internet. The NISTAR detector will be measuring the Earth’s radiation budget. By measuring how much radiation is absorbed and reflected from Earth, scientists can build models to detect if our planet is warming and at what rate.”

The NISTAR detector was originally dubbed “GoreSat” after then Vice-President Al Gore. Mr. Gore had been at Kennedy Space Center to watch on Sunday February 8, 2015 to watch the first launch attempt.

JASD hired the United States Air Force to launch the rocket into space. The USAF subsequently hired SpaceX to carry the satellite on their Falcon 9 V 1.1 rocket. At a pre-launch press conference, Colonel D. Jason Cothern explained that the USAF hired SpaceX because they believe in competition. The Air Force sees DSCOVR as a low-risk payload and a good first opportunity to have SpaceX do work for the Department of Defense.

One fascinating sidebar to today’s launch is SpaceX’s continuing quest to land the first stage on a autonomous drone barge in the Atlantic Ocean. Hans Koenigsmann of SpaceX explained the challenges: “After sending DSCOVR into a higher orbit, we won’t have enough fuel to do an initial braking burn upon our return. With a higher apogee and a faster return, we have only two burns instead of three to slow the rocket. The risks are still very high. I would estimate a 50 percent probability of success this time.” While the weather conditions at the launch pad were ideal, the weather off the coast of Jacksonville, where the autonomous spaceport drone ship (ASDS) was stationed, was not. Due to high seas and the loss of one stabilizing engine on the ASDS, SpaceX was forced to land the first stage in the ocean.