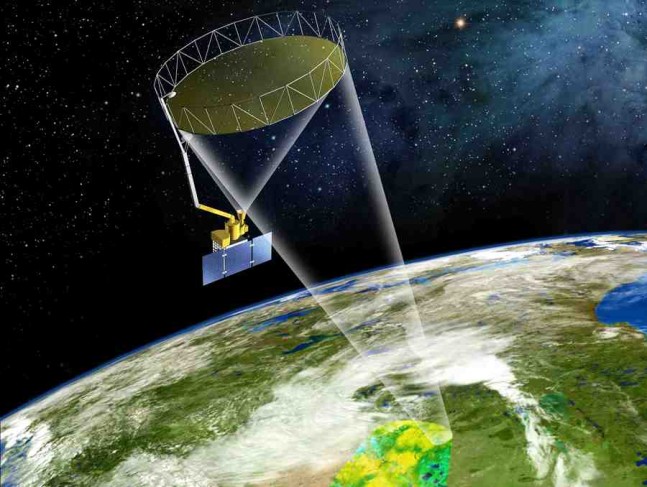 On Jan. 31, 2015, NASA launched the Soil Moisture Active Passive (SMAP ) mission from Space Launch Complex 2 at Vandenberg Air Force Base in California, on a United Launch Alliance (ULA )Delta II rocket. For the next three years, the solar-powered SMAP satellite will study moisture in the soil and detect whether that moisture is frozen or thawed. The satellite is in a polar orbit and has spent its first three months in a commissioning phase, during which the solar panels were unfurled, the 20-foot reflector antenna was deployed, and the instruments were spun up to full speed. Now the SMAP spacecraft has begun its science operations.

The SMAP satellite measures the Earth’s moisture in the top two inches (five centimeters) of topsoil. It measures the moisture in the soil every two to three days in order to observe over time the changes from major storms and the changing of the seasons. The spacecraft measures moisture in parts of the world that are not underwater or frozen and distinguishes between ground that is frozen or thawed. SMAP’s measurements will help scientists to understand the circulation of water and carbon. The carbon cycle has more branches than the water cycle; it transfers from the air, in the form of carbon dioxide, to the soil, rocks, surface water and frozen surfaces.

Additionally, the amount of water that evaporates into the air depends largely on soil moisture. Currently, very little is known about the variability of soil moisture, either regionally or globally. SMAP’s radar and radiometer share the same antenna, a 20-foot (6-meter) dish, providing the most accurate and highest-resolution soil moisture maps ever obtained from space. A reflector collects radio waves and focuses them into a feed horn which collects echoes from the radar and sends them to the radiometer electronics where they are processed.

Dara Entekhabi, SMAP science team leader at the Massachusetts Institute of Technology (MIT), added, “SMAP data will be combined with data from other missions like NASA’s GPM (Global Precipitation Measurement), SAC-D/Aquarius and GRACE (Gravity Recovery and Climate Experiment) to reveal deeper insights into how the water cycle is evolving at global and regional scales.”

SMAP has revealed a new global map of soil moisture. It shows dry conditions in the southwestern United States and Australia’s interior. In the Midwest and eastern United States, the map shows moist soil, as well as in Europe and Asia. In areas where the ground is frozen, such as the far northern regions, soil moisture measurements are not shown.

This data can be used to help forecast the weather, droughts, and floods. Over the next year, data from SMAP will be compared with ground measurements from sites around the world, as well as soil moisture measurements from aircraft-mounted instruments. These measurements will serve to validate SMAP’s data. Once the data is calibrated, in August 2015, it will be made available to the public at public-access data archives. Validated measurements of soil moisture and freeze/thaw cycles will be available for use by the general scientific community in summer of 2016. Hi I would like to receive information on SMAP. I would love to watch it on my computer. Would I be able to get real time information? Would the information be open for public viewing ? When? What web site?