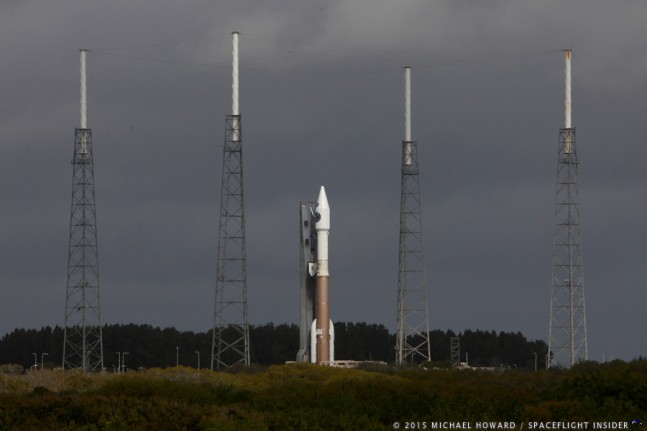 On March 12, 2015, a United Launch Alliance (ULA ) Atlas V 421 is scheduled to lift off from Cape Canaveral Air Force Station’s Space Launch Complex 41 at 10:44 p.m. EST (03:44 GMT) and send a group of 4 Magnetospheric Multiscale (MMS) spacecraft into low-Earth orbit, more commonly referred to as “LEO.” This mission is poised to revolutionize humanity’s understanding of the phenomenon of magnetic reconnection.

Once placed into their highly-elliptical orbits, these 4 satellites (each named after members of The Beatles rock group) will be flying in “an adjustable pyramid-like formation that enables them to observe the three-dimensional structure of magnetic reconnection”, according to NASA’s MMS mission website. NASA’s next Earth science mission is poised to take to the skies.

This type of formation enables the mission to determine the spatial distribution of reconnection. According to NASA, “Attitude control system keeps the spacecraft to within ±0.5° of the desired orientation during science operations.” Thanks to the high time resolution and accuracy of these 4 spacecrafts, the MMS mission will help scientists and engineers to understand the microphysical nature of magnetic reconnection – an important process that exists in almost every plasma system in the universe (star systems, accretion disks, galaxies, etc). “Magnetic reconnection is a general process that happens almost everywhere in space,” said Ming Zhang, professor of Physics and Space Sciences at Florida Tech, whose research is focused on the heliosphere, solar wind, and space weather. “For example, magnetic reconnection is the basic reason for the Coronal Mass Ejection (CME) from our Sun.”

The magnetic field lines of the Sun become twisted by differential rotation. As the Sun rotates, the magnetic field lines around the equator are “squeezed” closer and closer together. The repulsion between these magnetic field lines forces some part of them away from the Sun’s surface. The resulting “stretch” finally breaks the upper field lines, and the remaining two ends reconnect. The huge amount of magnetic energy released from this reconnection process produces two jets of accelerated plasma. One is ejected radially outwards, and forms the CMEs, while the other shoots towards the surface of the Sun, and creates a shock wave that causes flares.

“Magnetic reconnection can also happen in the electron diffusion region (EDR) near the Earth, where magnetic fields in adjacent regions have opposite orientation” adds Zhang. “The solar wind carries plasma towards Earth. This pressure can make magnetic field lines disconnect with themselves and reconnect with other field lines.” Artist concept of MMS, a mission to study how magnetic fields release energy in a process known as magnetic reconnection.
Image Credit: NASA

This is a dynamics process: as more and more of these kind of reconnections happen in the EDR, newly reconnected field lines are pushed by the solar wind back into the magnetotail, where reconnection can happen again. This transforms magnetic energy into the thermal and kinetic energy of charged particles that are shot back to the Earth. This affects geospace weather and technology systems like the telecommunication networks, GPS, and electrical power grids. “The MMS mission will help us to understand this process in detail,” said Zhang.

As for measuring the rate of magnetic reconnection, these 4 spacecrafts will, in fact, measure the change in magnetic flux to learn about reconnection rate. According to NASA, “Large variations of the rate are observed or inferred, but without detailed observations of the EDR region, it has been impossible to predict this rate or its variations. MMS will provide the needed observations for the first time.” KunYang Li (Lily) is a SpaceFlight Insider Launch Correspondence intern from the Florida Institute of Technology, where she is currently working on obtaining her Bachelors degree in Astronomy & Astrophysics (with a minor in Computational Mathematics). She has a strong passion for and fascination with astrophysics and is aiming for a career in astrophysical research.

Lily is dedicated to better understanding the universe in which we live and tries to learn something new about space science everyday. When presented with the opportunity to have her content appear on SpaceFlight Insider, Lily jumped at the opportunity – becoming the first student under SFI’s partnership with the Florida Institute of Technology.

I am anxious to learn about the unexpected that we will discover from this.
The ‘ultimate optimist’ in me is hoping that this will provide the knowledge to build magnetic propulsion for in orbit.