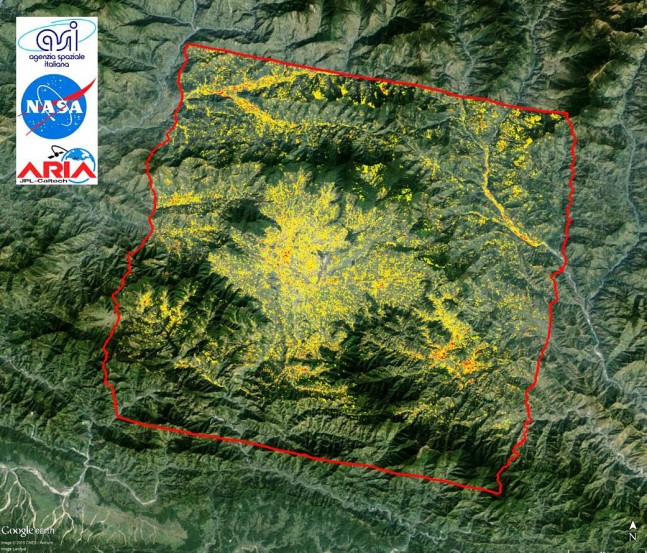 NASA technology and resources are being employed to help the victims of the Gorkha earthquake in Nepal. Photo Credit: NASA / Google Earth

On Apr. 25, 2015, an estimated 7,472 people lost their lives during an earthquake in Nepal. Estimated at being a magnitude 7.8 earthquake, the tragedy saw an array of U.S. agencies rush to the aid of those affected. Some of these included the U.S. Geological Survey, United States Agency for International Development (USAID)/Office of U.S. Foreign Disaster Assistance, World Bank, American Red Cross, and the United Nations Children’s Fund. All of these are using data and analyses provided by NASA.

NASA is helping to provide data to help rescuers find survivors of the disaster which appears to have had its epicenter in the village of Barpak. According to a report appearing on Gizmodo.com, NASA technology has already detected four victims by their heartbeat.

Also known as the Gorkha earthquake, this natural disaster caused aftershocks a day later. Besides the scores who had lost their lives in this disaster, the earthquake caused an estimated 15,000 injuries.

The NASA-provided optical and radar image data, produced by satellite, have been brought together to form an array of tools to help search for possible survivors. This data came from international as well as domestic partners and it includes what are known as “vulnerability maps” which are used to determine risks that may be present in the afflicted area. Also produced are “damage proxy maps” that are used to gain a better understanding of the amount of damage to a specific area.

These tools allow for rescuers to not only increase the chances of finding survivors, but also to help prevent those searching for possible survivors from injuring themselves.

The NASA technology that is capable of detecting victims trapped within the rubble of collapsed buildings is also being deployed to the region so as to search for survivors. This includes the remote-sensing radar technology called FINDER (Finding Individuals for Disaster and Emergency Response), developed by JPL in conjunction with the U.S. Department of Homeland Security’s Science and Technology Directorate. According to NASA, this system has the capability of detecting individuals that are buried as deep as 30 feet (9.1 meters) in crushed materials, hidden behind 20 feet (6 meters) of solid concrete, or from a distance of 100 feet (30.5 meters) in open spaces.

Finder is licensed by the private entity R4 Incorporated of Edgewood, Maryland, and is currently in Nepal helping with recovery efforts.

The region impacted by the Gorkha earthquake is at risk from additional natural disasters, which include: landslides, river damming, floods, and avalanches. In fact, during the initial quake, 19 people had lost their lives on Mount Everest due to an avalanche. This marks the deadliest day ever encountered on Everest to date.

The U.S. Space Agency is currently working to get critical satellite data to the Nepalese government. This is particularly difficult due to the limited technological resources in the region – specifically, Internet bandwidth.

The agency is working under a joint NASA-USAID SERVIR effort to aid in disaster response mapping via the SERVIR-Himalaya office at the International Centre for Integrated Mountain Development located in Kathmandu.

NASA has centers across the United States as well as other facilities globally. Some of those that are involved in the relief effort include: NASA’s Marshall Space Flight Center, located in Huntsville, Alabama; Goddard Space Flight Center in Greenbelt, Maryland; and the Jet Propulsion Laboratory in Pasadena, California.