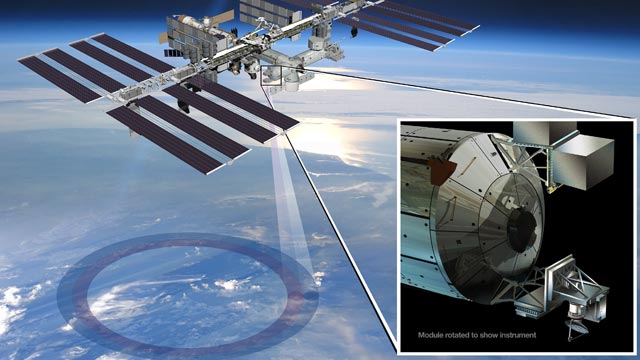 The RapidScat instrument is designed to highlight the cost-effectiveness of reusing flight-worthy hardware to perform science missions. Image Credit: NASA

Perspective is everything in space. Telescopes must have their optics calibrated to an unimaginably minimal tolerance; they must be capable of anticipating and correcting atmospheric distortions; they must sustain tremendous temperature fluctuations in the hostile vacuum of space; and, of course, they must be pointed in the right direction. For most, that direction is invariably towards the stars. Yet in a press teleconference today attended by The Spaceflight Group, NASA announced the widest sweep of Earth Science launches the Agency has attempted in nearly a decade.

The announcement, made by the director of the Earth Science Division Michael Freilich and ISS chief scientist Julie Robinson, contained five missions aimed at generating data on everything from climate mapping to daily weather forecasts.

Three of the missions, GPM, SMAP, and OCO-2, are traditional stand-alone projects, launched in spacecraft and set in orbits around Earth. In 2014 NASA is set to launch five Earth Science missions, all of which interact with our planet’s water cycle. Image Credit: NASA

GPM, the Global Precipitation Measurement Core Observatory, will provide a near-global map of the planet’s precipitation every four hours. A legacy project reaching operational status in 2014, GPM provides data that will make weather forecasting more accurate and contribute to the datasets needed by climate change researchers.

SMAP, the Soil Moisture Active Passive, is also aimed at moisture measurement. The spacecraft measures the water content of ground soil as well as freezing and thawing rates. The data collected by SMAP is applicable in meteorology, hydrology, climatology and other Earth Science disciplines. Its significance is marked by its place as one of four first-tier decadal missions.

OCO-2, the Orbiting Carbon Observatory, will help analyze the changing nature of natural carbon sources and sinks across Earth through the measurement of light bouncing off of the planet. A recovery project, OCO-2 replaces OCO-1 which reentered the atmosphere shortly after launch do to a separation failure in 2009. It will be the first orbiting mission specifically designed to measure atmospheric carbon from space.

The remaining two missions, CATS and RapidScat, will orbit as instruments mounted on the exterior of the International Space Station (ISS).

CATS, the Cloud-Aerosol Transport System, uses light measurements to detect and identify various types of particulates, pollutants and clouds in the Earth’s atmosphere. In partnership with the Japan Aerospace Exploration Agency, CATS will be fixed on the Japanese Experiment Module for operation.

RapidScat is a replacement instrument supplanting the non-operational QuikScat Earth Satellite. By using the ISS as a base, RapidScat quickly and cost effectively replaces QuikScat’s responsibility for measuring wind speed and direction across ocean surfaces. This data is invaluable for extreme weather forecasting. Dr. Robinson spoke directly to the unique benefits of operating instruments from the Station instead of launching isolated spacecraft. She noted that the ISS orbits at 400 km, twice as close as most satellites, offering enhanced optical precision for the same caliber tools. The ISS’ inclination at 51.6 degrees is also a factor, its orbital route shifting over a repeating pattern allowing scientists to measure change over time (many satellites pass the same territory at the same time daily). Nevertheless, the desire among climate modelers for data on fixed positions over extended periods means that not all projects are adeptly suited for ISS missions.

Dr. Robinson also addressed the recent news that NASA would continue its involvement in the ISS for at least another four years. She regarded the announcement as a “powerful enabling influence” on future planning, noting that it often takes three or more years for a project to go from approved to operational. The ISS extension means projects approved this year would have 90% more research opportunities with the added time.

Together, these Earth Sciences missions act to complement each other and the needs of researchers across the globe. The diversity of projects NASA is spearheading this year mirrors Dr. Freilich’s reminder that “the planet on which we live is quite complex.”