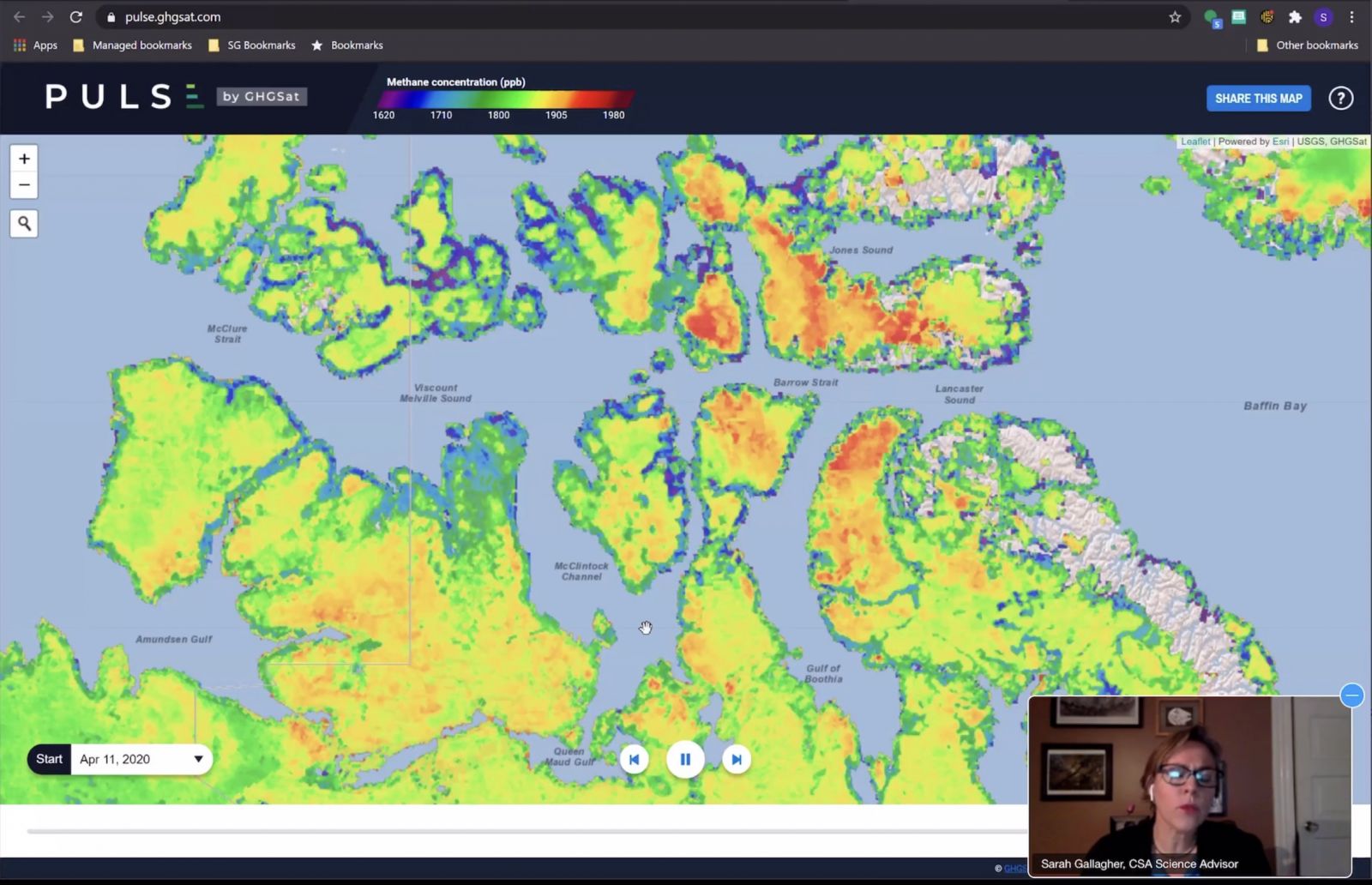 Accessible at no-cost for public and community use, GHGSat’s newly released PULSE project brings methane gas concentration data within reach of anyone seeking to explore their interactive, online worldwide map. In this screenshot taken by the author during a tour of the PULSE platform, Dr. Sarah Gallagher with the Canadian Space Agency is explaining how seasonal temperature changes in Canada’s arctic region can lead to natural shifts in localized methane concentrations, where in other regions concentration changes can be attributed to industrial activities. Sean Costello / Spaceflight Insider.

PULSE GHGSat has been built to show monthly methane concentration averages, updated weekly, with a resolution of approximately 2km x 2km per pixel. Readings within the tool are colour coded, allowing most viewers to very easily detect at-a-glance differences across regions and, with the use of a slider function, time. Users interested in doing so can create animations which allow them to explore how CH4 levels have changed over time, with the facility to look back as far as six months. 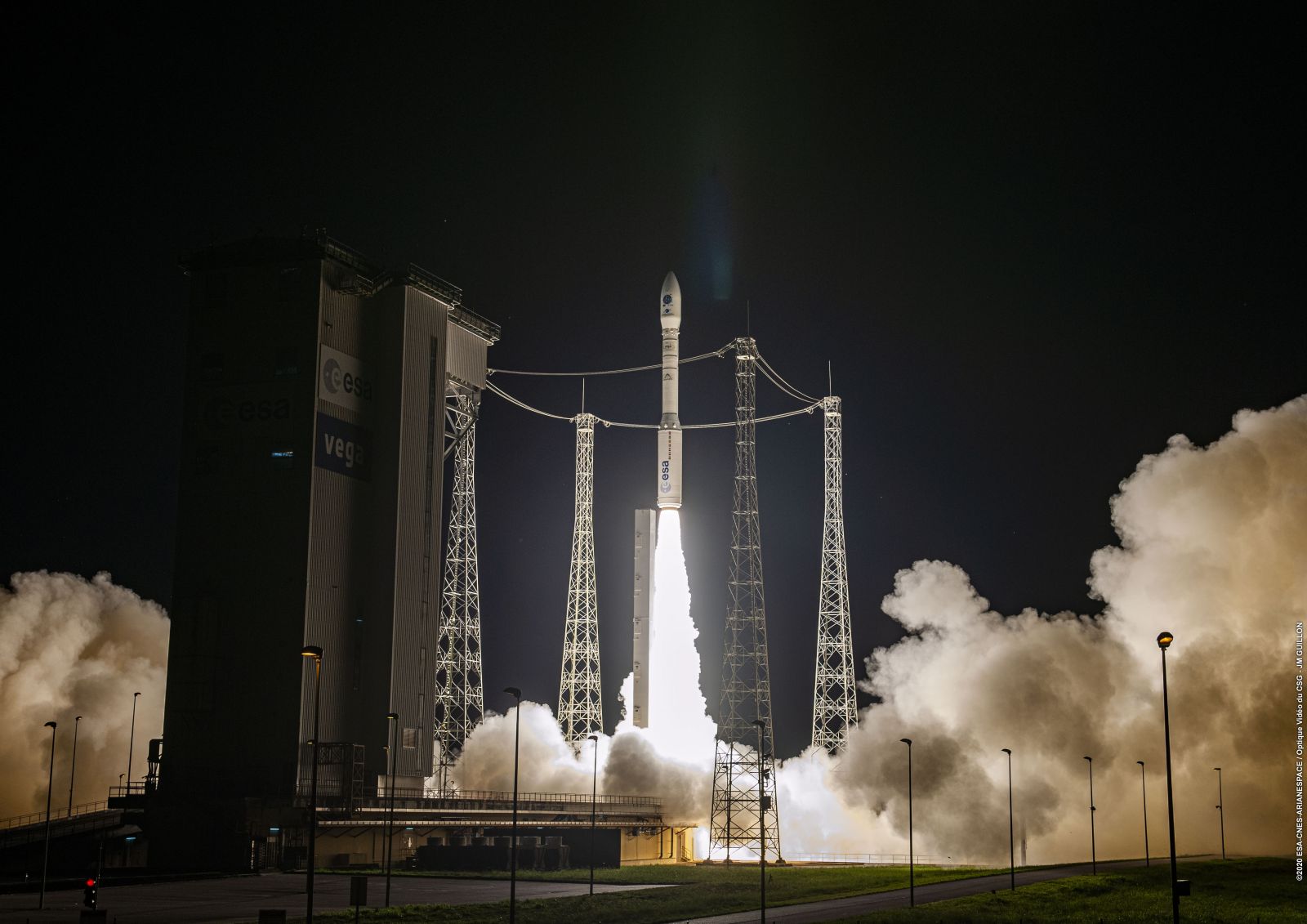 Powered primarily by data from GHGSat-owned satellites flying in low Earth orbit (LEO), including their most recent addition to the fleet, GHGSat-C1 “Iris” (which launched on September 2, 2020, aboard a Vega launcher from the Kourou International Spaceport, Guiana), the PULSE project data is also augmented by readings from additional orbiting LEO sources, such as the European Space Agency’s (ESA) Sentinel-5P spacecraft.

In shedding light on the relevance and importance of tracking methane concentrations, GHGSat provided a summary of the situation: “Carbon dioxide’s role in climate change is well documented but methane has, until recently, escaped the same scrutiny. Concentrations of CH4 in the atmosphere are increasing. Invisible to the naked eye, it has a global warming potential around 84 times greater than CO2, over 20 years, and accounts for about a quarter of all man-made global warming”.

During a pre-launch walkthrough of the platform, it was stressed to Spaceflight Insider that PULSE was designed to increase community awareness about worldwide methane concentrations, seeking to instigate informed discussion, not to present data in such a way as to directly identify specific potential sources or event timings. 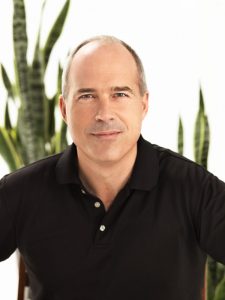 Speaking on the topic of where exactly PULSE sits within the scope of capabilities and purpose of GHGSat, CEO Stéphane Germain remarked that “Pulse represents the new state of the art when it comes to visualizing methane. Our day job is to monitor emissions for industry and governments around the world, using a growing fleet of satellite and aircraft sensors, and supported by powerful, proprietary analytics. We have drawn on all these capabilities in the design of Pulse”. For commercial and government users, GHGSat’s fee-based service offering includes timely reporting of GH4 concentrations at a resolution of 25 meters per pixel.

GHGSat first began work 10 years ago, and their first satellite, “Claire” was launched in 2016; their third satellite, GHGSat-C2 “Hugo”, is due to be launched atop a SpaceX Falcon 9 in December 2020, with plans to have 10 spacecraft in orbit by end of 2022. Working with the Canadian Space Agency (CSA) and ESA science and industry support teams, PULSE represents the latest Canadian success story, working in partnership and within the international space services industry. Cognizant of the value of the raw data they are collecting, GHGSat recently announced that 5% of its data from GHGSat-C1 “Iris” will be made available to the scientific community through an ‘Announcement of Opportunity’ with CSA and ESA.