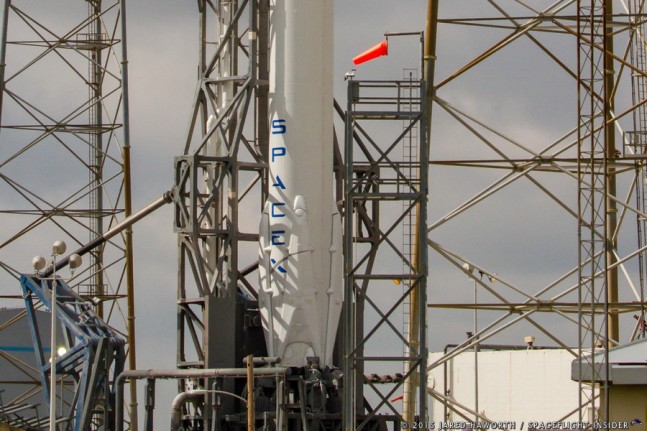 CAPE CANAVERAL, Fla. — The second launch attempt of DSCOVR was scrubbed at approximately 13 minutes prior to the scheduled liftoff time of 6:05 p.m. EST (2305 GMT) today due to violation of liftoff weather conditions. DSCOVR is a satellite designed to measure incoming solar weather. However, it was Earth-bound weather that caused the scrub. The third launch attempt is now scheduled for no-earlier-than (NET) Wednesday, Feb. 11, 2015 at 6:03 p.m. EST (2303 GMT).

The cold front that caused Monday’s rain pushed through Florida’s Space Coast and skies cleared by early afternoon. But strong winds of 25-30 miles per hour behind the front persisted throughout the day. Estimates placed the launch constraints far outside acceptable limits for launch. Hans Koenigsmann of SpaceX and Mike McAlaneen from the 45th Weather Squadron discuss the health of the launch vehicle and weather conditions ahead of the DSCOVR launch. Photo Credit: Jared Haworth/Spaceflight Insider

Weather for Wednesday’s launch attempt is calling for a greater than 90 percent chance of the weather being favorable for launch. If DSCOVR fails to launch on Feb. 11, 2015, SpaceX must stand down until Feb. 20, 2015, when the launch time would be approximately 5:35 p.m. EST (22:35 GMT).