Gore: DSCOVR’s selfies – will be ‘EPIC’ 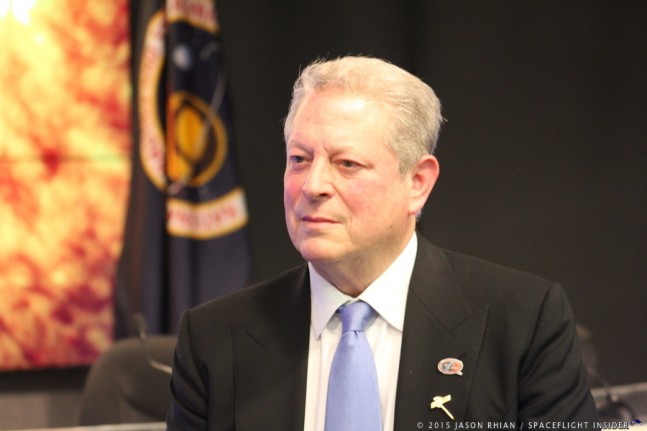 CAPE CANAVERAL, Fla. — As previously reported on SpaceFlight Insider, the primary mission of Deep Space Climate Observatory (DSCOVR) is to provide early warning of dangerous solar weather. But solar winds don’t affect many of us on a day-to-day basis. Unless you are a commercial jet pilot or manage an electric utility company in the far northern hemisphere, solar wind won’t have an impact in your daily life. Former U.S. Vice President Al Gore stopped by the Kennedy Space Center press center on Sunday to talk about the two Earth-facing instruments that are DSCOVR’s secondary mission. While the launch of DSCOVR was delayed 24 hours to no-earlier-than Feb. 9, 2015 at 6:07 p.m. EST (2307 GMT) – the mission is an important one for Gore, who has been a long-time supporter of environmental efforts.

Introduced by Florida Senator Bill Nelson, Gore talked about the Earth Polychromatic Imaging Camera (EPIC) and NIST Advanced Radiometer (NISTAR). As DSCOVR faces the Sun at 930,000 miles (1.5 million kilometers) from Earth, the two instruments on the back of DSCOVR will be focused on Earth – and provide unique views of our home world. The DSCOVR spacecraft can be seen in front of the Falcon 9’s payload fairing. Photo Credit: Kim Shiflett / NASA

“Every day, EPIC will capture multiple photos of the entire sunlit disk of the Earth. These are photos that are unlike any photos that we’ve seen since the Apollo-era astronauts took pictures of the Earth. Every day, people across the world will be able to view current images of the Earth taken by EPIC. Every man, woman, and child will be able to see Earth. This can add to our thinking of Earth. Perhaps the general public will put pressure to take action to save human civilization,” Gore said.

Earlier in the day, Dr. John Grunsfeld, associate administrator of NASA’s Science Mission Directorate provided more details on the EPIC camera as well as some of the history surrounding space-based Earth observation efforts.

“The Apollo-era astronauts took famous pictures of the Earth using a hand-held Hasselbad camera. Since Apollo 17 in 1972, we have not had many pictures of the entire Earth. Any images you see of Earth since 1972 have been pieced together from multiple images taken from satellites in geostationary orbit. From that orbit, it is impossible to capture the whole Earth in a single photo. The images taken by EPIC will be true-color, 4 Megapixel images showing the entire sunlit disk of Earth at a single point in time,” Grunsfeld said.

While DSCOVR transmits solar wind data in real time, the EPIC images will be “batched” and transmitted once a day to a NASA ground station located at Wallops Island, Virginia. Depending on data transmission times, anywhere from 4 to 6 new images will arrive each day. The images will be posted on the Internet the following day.

“Combining these different wavelength images allows the determination of physical quantities like ozone, aerosols, dust and volcanic ash, cloud height, or vegetation cover. These results will be distributed as different publicly available data products allowing their combination with results from other missions.”

Gore also spoke about the NISTAR instrument on board this spacecraft. “We will be able to accurately measure the energy budget of planet Earth. Ground-based measurement systems such as temperature are noisy. NISTAR will measure solar energy  coming in to planet Earth and also measure the energy reflected back in to space. If the first minus the second is positive, it indicates a problem: the Earth is trapping too much energy. Ice is melting, water levels are rising on the beaches of Miami, weather is chaotic. NISTAR will allow us to measure the energy budget 10 times more accurately than ever before. Before Gore spoke, he was introduced by Florida Senator Bill Nelson. Nelson gave credit to Gore for the satellite.

“Back in the 1990’s, Vice President Gore conceived of a satellite to orbit in the Lagrange position. The whole idea was Al Gore’s. The satellite was named Triana after one of the explorers on Christopher Columbus’s crew. But politics got in the way and the program was cancelled.”

Gore thanked Senator Nelson. “I was happy to be invited here to watch the launch as a guest of Senator Bill Nelson. Without Bill Nelson, and without Maryland Senator Barb Caskey who kept the satellite in storage in Maryland, the satellite would never have gotten to the launch pad today. I credit the scientists, engineers, NASA, NOAA. Some of the science teams volunteered for the last 14 years since the program was cancelled because they believe in it that much.”

At Saturday’s pre-launch press conference, Steven Clarke, NASA JASD director explained that it will take 110 days for DSCOVR to reach orbit, 40 days for check out, and then another 15-20 days until EPIC comes on line.

Since the DSCOVR satellite will be 930,000 miles from Earth, it is certain that EPIC will capture occasional images where the Moon is eclipsing the Earth. Dr. John Grunsfeld said that agency has already modeled the paths of the Moon and Earth and DSCOVR and have predicted when these epic images will occur.

Thanks for the article. Interesting read, and nice photos. However, “DSCOVR faces the Sun at 960 million miles (1.5 billion kilometers) from Earth” doesn’t sound right. That is over 10 times the distance from the earth to the sun. I’m sure it’s a typo…

Thanks for bringing that to our attention, it is a typo and has been corrected. The proper distance is 930,000 miles (1.5 million kilometers).

What a waste of money for very little return. These funds need to be shifted into the manned flight program so we can stop paying Russia to keep their people employed instead of our own people. Al Gore and Nelson have no credibility with the NASA crowd.

Well, each GEO satellite costs usually more than 150M$. The deployed electronics are shielded, but not against the higher solar winds. Having a reliable satellite warning at L1 protects the hundred of GEO sats “in case of emergency”. Its like airbags, nobody wants to use them, yet it feels better to equip cars with it.
Tens of billions $ damage could be avoided with this little launch, costing 100M to construct and proving US gov that SpaceX is indeed a partner to count with…

2) The EPIC camera will provide ozone, aerosol, and vegetation retrievals to help in modeling the atmosphere and land systems.

4) The space weather instruments will help monitor solar storms, replacing the existing aging satellites. These can knock out power (potentially a trillion dollar disaster someday), or can throw off communications satellites. Pilots need to know about these also. It also helps predict auroras for regular people to watch and enjoy.

Apparently, when it comes to the usefulness of the spacecraft, the people in charge disagree with you greatly. (Maybe that’s why they’re in charge!)