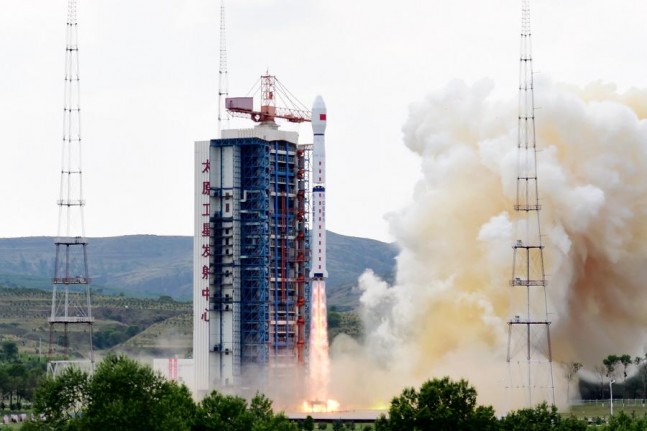 China conducted a “surprise” launch on Friday, June 26, by sending a high-resolution Earth-imaging satellite Gaofen-8 on a Long March 4B rocket. The launch took place at 2:22 a.m. EDT (6:22 UTC) from the LC9 launch complex at the Taiyuan Satellite Launch Center in northern China’s Shanxi province.

Friday’s launch was out of sequence as only two Gaofen satellites have been launched to date, in April 2013 and August 2014, for the China High-Resolution Earth Observation System CHEOS.

The launch this past Friday was not officially announced in advance. Notices to pilots released on Thursday gave the first warning of the upcoming launch. NOTAMs (Notices to Airmen) were published identifying two temporarily restricted areas matching up with a polar launch from the Taiyuan Satellite Launch Center, taking the rocket to the southwest toward a high-inclination orbit.

The CHEOS program comprises the elements of the orbital system, the near-space system, the aerial system, the ground system, and the application system as a whole to realize Earth observation at high temporal, spatial and spectral resolution.

The next satellite in the program, Gaofen-3, is currently scheduled to be launched in 2015. The Gaofen-4 launch is slated for a late 2015 – early 2016 liftoff. It is hoped that the entire CHEOS series of satellites will be in orbit by 2020.

CHEOS satellites will be operated in different orbits including low-Earth orbit (LEO) and Geostationary Orbit (GEO) to create a range of data products at different qualities and revisit times.

The June 26 lift-off was the second Chinese launch of this year (2015). China has plans to launch two more missions this year.