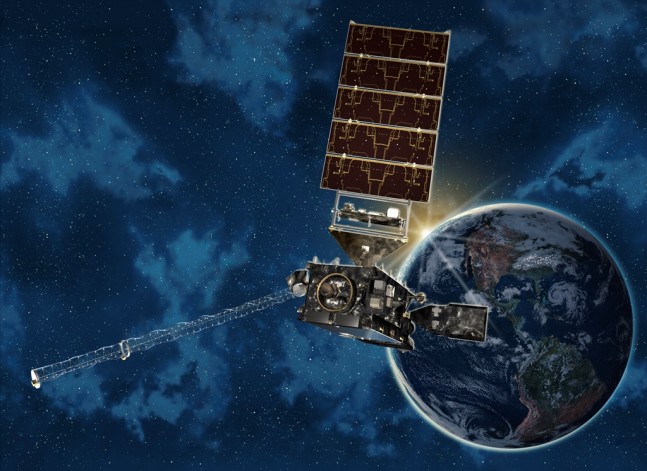 The GOES-R satellite is seen in this artist's rendering. Image Credit: Lockheed Martin

The National Oceanic and Atmospheric Administration’s (NOAA ) GOES-R weather satellite has completed construction and is moving on to the testing phase of its development. If everything continues to proceed according to plan, GOES-R should launch early next year. GOES “R” is the first of four planned next-generation geostationary weather satellites that NOAA is currently working to deploy.

NOAA is fielding the newer Geostationary Operational Environmental Satellite “GOES” spacecraft so as to provide improvements in quality, quantity, and timeliness of weather data collected by the current GOES system that monitors weather over North America. “NOAA’s GOES satellites are our nation’s weather sentinels and are vital to our severe storm prediction and warnings,” said Tim Gasparrini, vice president and GOES-R Series program manager at Lockheed Martin Space Systems Company. “Now that the first GOES-R Series satellite is complete and environmental testing is underway, we’re one step closer to providing a necessary upgraded capability to NOAA and our nation.”

GOES-R will now go to the 65 foot-tall thermal vacuum chamber at Lockheed Martin’s facility near Denver. Throughout August, the spacecraft will undergo a battery of tests, turned on, tested in extreme hot and cold conditions – and within a vacuum. Additional tests will include the “usual suspects” including, according to Lockheed Martin: reverberant acoustic, separation and deployment shock, vibration, and electromagnetic interference and compatibility testing.

GOES-R is much improved over the spacecraft that came before it. The satellite is capable of producing higher-resolution images of weather patterns and severe storms five times faster than other satellites already on orbit. It is hoped that this new equipment will aid in providing more accurate and reliable weather forecasts.

The craft is also tasked with providing support for short-term weather forecasts and severe storm watches and warnings, maritime forecasts, seasonal predictions, drought outlooks, and space weather predictions. It is hoped that GOES-R will also be able to improve hurricane tracking and provide additional time prior to severe thunderstorm and tornado strikes. As noted, GOES-R is slated to launch in March of 201 atop a United Launch Alliance Atlas V rocket from Cape Canaveral Air Force Station’s Space Launch Complex 41 in Florida.

“This is our first geostationary weather satellite and it’s a very advanced system. The main spacecraft is based off our proven A2100 geostationary satellite platform,” Gasparrini said. The GOES system was started in 1975 – and continues to be used to this day. Photo Credit: Lockheed Martin

GOES provides critical data about weather in the Western Hemisphere. Each Satellite carries Imager and Sounder hardware for the primary mission. Other instruments were designed to monitor the immediate space environment surrounding the satellite. Additional sensors such as sun monitors were added to latter spacecraft (GOES-13 to GOES-15).

The first GOES satellite was launched in October of 1975. There have been a total of 16 satellites launched under the program, with only one of those, GOES-G, failing to reach orbit. The GOES satellites have a particular naming system. Before its flight, the satellite is designated with a letter. Once the spacecraft has reached orbit, it is renamed, this time with a number. For example, GOES-A becomes GOES-1. Since GOES-G was lost, GOES-H was designated GOES-7 upon activation.

The system has had few issues since becoming active. In December 2007, a failure aboard GOES-12 temporarily forced the shifting of the weather collection workload to GOES-10 and GOES-11. During this blackout, GOES-10 also stopped responding via its main antenna, forcing operators to move to the backup unit. After thirteen days, the entire GOES system was back to full operation.

The GOES-13 and 15 spacecraft are the current workhorses of the fleet with GOES-14 serving as a standby spacecraft in the event of a failure on orbit. GOES-12 is still operational and provides service for South America. A few other GOES spacecraft are still in service but re-purposed, such as GOES-3 – which is currently being used for communications with the South Pole Research station. All other GOES spacecraft have been decommissioned to graveyard orbits.

The GOES program is co-located at NASA’s Goddard Space Flight Center in Maryland with NOAA’s Satellite and Information Service funding, managing and operating the GOES-R series of satellites.