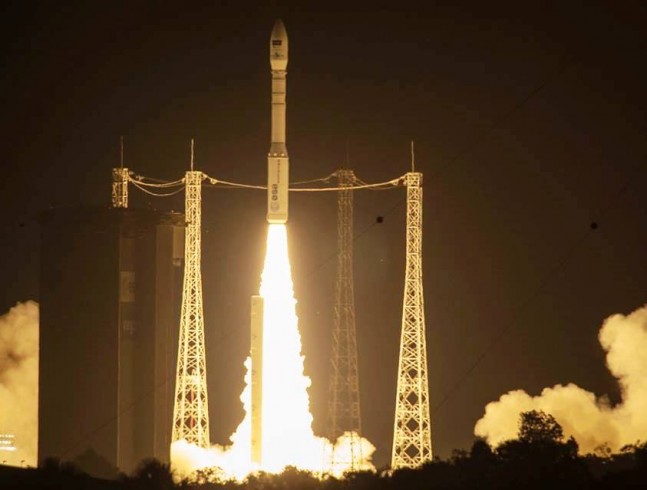 An Arianespace Vega launch vehicle lifts off from Kourou, French Guiana, with the Sentinel 2A spacecraft. Photo Credit: ESA

European rocket manufacturer Arianespace successfully launched a Vega rocket with its payload of the European Space Agency’s Sentinel-2A Earth observation satellite at 9:52 p.m. EDT on 22 June (01:52 GMT on 23 June) from ESA’s spaceport in Kourou, French Guiana. The satellite separated from the rocket’s upper stage 54 minutes after lifting off. The mission, designated Flight VV05, marked the fifth flight of the lightweight Vega launch vehicle.

The first stage of the Vega rocket (P80) separated 1 minute, 52 seconds after lift-off. The P80 stage, a filament-wound carbon-epoxy case, has the same diameter as the solid boosters used on the Ariane 5 rocket and its overall length is similar to that of one of the longest segments of the solid booster. The second stage (Zefiro-23) separated shortly after, approximately T+3.5 minutes into the flight. The fairing, 9 feet (2.6 m) in diameter, was jettisoned about 20 seconds later. Zefiro-9, the rocket’s third stage, separated six and a half minutes after the launch. Sentinel 2A depicted in Earth orbit in this artist’s rendering. Image Credit: ESA

The separation of the Sentinel-2A satellite at approximately T+54 minutes and 43 seconds was preceded by two burns of Vega’s Attitude and Vernier Upper Module (AVUM) – the rocket’s fourth stage. The first burn started at T+7 minutes and 42 seconds, ending nearly 9 minutes later.

The second burn commenced at T+51 minutes and 46 seconds, lasting only 2 minutes. Sentinel-2A was put into polar, Sun-synchronous orbit at an altitude of 477 miles (786 km). AVUM has a bipropellant propulsion system to provide orbital injection and a monopropellant propulsion system for roll and attitude control. It also contains Vega’s avionics module, which handles flight control, mission management, telemetry, and end-of-flight functions, along with the electrical power supply and distribution.

AVUM is designed to inject different payloads into different orbits and ensures the fine pointing of satellites prior to the separation. At the end of the mission, it is deorbited under safe conditions to limit the amount of orbital debris – a growing concern. The Sentinel-2 mission is dedicated to Europe’s Copernicus environmental monitoring program, which is headed by the European Commission in partnership with ESA. The new satellite will provide information for agriculture and forestry and for helping to manage food security. The images will be used to determine various plant features such as leaf chlorophyll and water content.

“Sentinel-2 is the second satellite of a constellation of 20 satellites which will scrutinize planet Earth and will vastly improve the ability of Copernicus to provide European citizens with the most comprehensive data for environmental and security applications available anywhere in the world,” said ESA’s Director General Jean-Jacques Dordain.

As well as monitoring plant growth, the satellite will be used to map changes in land cover and to monitor the world’s forests. It will also provide information on pollution in lakes and coastal waters. Images of floods, volcanic eruptions, and landslides will contribute to disaster mapping and helping humanitarian relief efforts. The Vega with Sentinel 2A sits poised for launch at Kourou, French Guiana. Photo Credit: ESA

Specifically, the mission will monitor variability in land surface conditions, and its wide swath width and high revisit time (10 days at the equator with one satellite, and 5 days with 2 satellites under cloud-free conditions which results in 2-3 days at mid-latitudes) will support monitoring of changes to vegetation within the growing season.

The coverage limits are from between latitudes 56° south and 84° north.

“Sentinel-2A, with its optical camera, is a complement to the radar images from Sentinel-1A,” said Volker Liebig, ESA’s Director of Earth Observation Programmes. “It will support important areas of benefit to society such as food security and forest monitoring.”

Once the Sentinel data are acquired on board, they are sent to the ground and received at the X-band core stations located in Matera, Italy, Maspalomas, Spain, and Svalbard, Norway.

Data can also be transmitted via laser link to the European Data Relay System, which relays data via geostationary satellites to ground where they are received at the user Ka-band stations. Each Sentinel satellite has a high level of autonomy so that they can operate without any intervention from the ground for periods of up to 15 days.

Built by Airbus Defence and Space, the 2,513 lbs. (1,140 kg) Sentinel-2A will deliver high-resolution and multispectral capabilities, providing a 180 miles-wide (290 km) coverage path and frequent revisits, and is to join the Sentinel-1A spacecraft which was placed into a Sun-synchronous orbit in April 2014. The Sentinel 2A spacecraft is integrated to the Vega booster. Photo Credit: ESA

“Sentinel 2 is the next important milestone to deploy Europe´s Copernicus program for which Airbus Defence and Space is a key contributor. In particular, we are strongly involved in the Copernicus space segment delivering eight satellites and four instruments,” said François Auque, Head of Airbus Space Systems.

Offering ‘color vision’ for the Copernicus program, Sentinel-2A will deliver optical images from the visible to the short-wave infrared range of the electromagnetic spectrum. With its multispectral imager and wide swath coverage, the mission not only offers continuity but also expands on the French Spot and U.S. Landsat missions. Mission controllers monitor preparations for the launch of Sentinel 2A. Photo Credit: ESA

Sentinel-2A is planned to be operational for more than seven years. The next Sentinel launch will take place in the second half of 2016. The Sentinel mission has been designed and built by a consortium of around 60 companies led by Airbus Defence and Space, and supported by the CNES French space agency to optimize image quality and by the DLR German Aerospace Centre to improve data recovery using optical communications.

Vega is a single-body launcher with three solid-propellant stages and a liquid-propellant upper module for attitude and orbit control, and also satellite release. With a height of 98 ft. (30 m) and diameter of 9.8 ft. (3 m), the launcher can place 660-3,300 lbs. (300–1500 kg) satellites into the polar and low-Earth orbits used for many scientific and Earth observation missions.

The diversity of launch elevations possible from the Kourou Spaceport, along with the flexibility provided by AVUM, enables Vega to inject a wide range of payloads into different orbits.

Today’s launch was Arianespace’s 5th mission this year, following two previous flights of Ariane 5 rockets, one Soyuz, and one Vega.