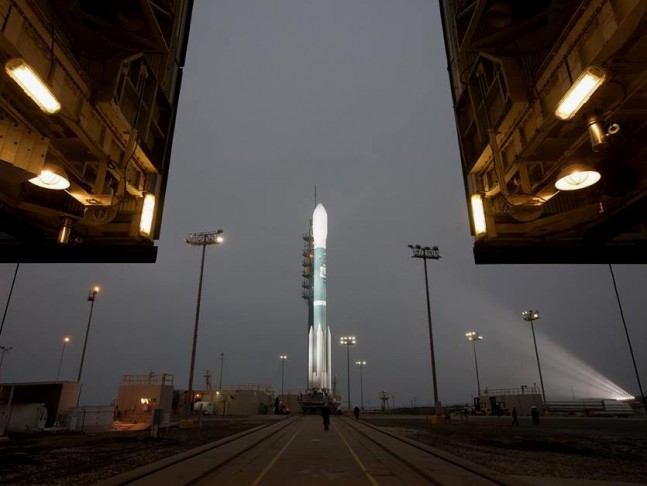 United Launch Alliance and NASA will have to wait at least 24 hours to launch the SMAP mission. The launch was scrubbed due to high upper level winds. Photo Credit Joel Kowsky / NASA

NASA and Colorado-based United Launch Alliance (ULA ) will have to wait at least 24 hours before they are able to launch NASA’s Soil Moisture Active Passive (SMAP ) mission. High upper level winds at Vandenberg Air Force Base’s Space Launch Complex 2 (SLC-2) forced the launch team to push their attempts back from the 6:20 a.m. PST (9:20 a.m. EST) launch time – until 6:22 a.m. PST. This was the furthest that ULA could push back the flight as the launch window was only open for three minutes.

When they try again tomorrow, the space agency and launch service provider will try to deliver the Earth-observing spacecraft to orbit atop one of the last Delta II rockets that will take to the skies (one more of the venerable rockets is planned for a 2017 flight). The current mission is poised to study moisture levels within our planet’s soil.

As NASA’s first U.S. Earth-observing satellite designed to map global soil moisture, SMAP plans to dig into the topmost layer of our planet’s soil in order to accurately measure the hidden water within and determine how that soil water affects our weather and climate. The mission will produce the most accurate, highest-resolution global maps ever obtained from space of soil moisture while enhancing scientists’ understanding of the processes that link Earth’s water, energy and carbon cycles.