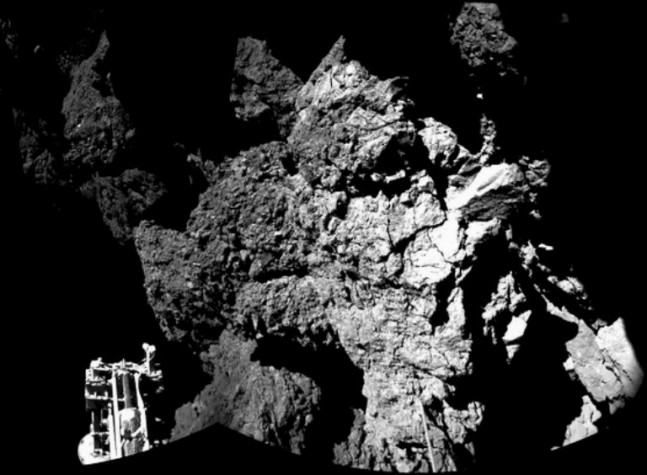 Rosetta's Philae lander is safely on the surface of comet 67P as seen in the initial CIVA images. Image Credit: ESA

Almost twenty years of hard work and dedication paid off this week for the European Space Agency (ESA ). On Wednesday, Oct. 12, ESA’s comet-chasing spacecraft, Rosetta, deployed a washing machine-sized lander and achieved the first-ever soft touchdown on the surface of a comet. The team in mission control waited on the edge of their seats for the lander, Philae, to send back landing confirmation, following a seven-hour descent. At 11:03 a.m. (1603 GMT), confirmation of Philae’s landing on Comet 67P/Churyumov-Gerasimenko was recieved; however, it was subsequently determined that Philae bounced twice and did not hit the targeted landing site.

So where did Philae end up? Well, we still aren’t exactly sure. ESA officials think they know approximately where it is, thanks to data from the CONSERT instrument.

Emily Lakdawalla of the Planetary Society has described a key detail of Philae’s descent: “When Philae was descending, it was in an elliptical orbit around the center of gravity of the comet. That orbit intersected the ground at the intended landing site in such a way that the horizontal component of Philae’s motion was parallel to the orbital motion of the surface at that point, which is another way of saying that the spacecraft landed vertically. So when it bounced off, it bounced off close to vertically in the reference frame of the comet’s surface, and then when it landed it landed a relatively short horizontal distance away from the initial impact site.”

After missing its targeted landing site, Philae ultimately ended up in a shadowy region, surrounded by rocks and boulders. Once images started to come in, scientists were concerned Philae might be turned over on its side. Subsequent data has shown that all three legs are on the comet’s surface.

Philae’s primary and backup batteries were equipped with a finite amount of power, and once that was depleted, the lander was to rely on solar panels to keep functioning. We now know Philae is in a region where minimal sunlight is reaching the solar panels. Philae’s hours are, therefore, numbered, and although the team is hoping to receive signal around midnight tonight, Central European Time, Philae is expected to run out of power very quickly. View of the head of the comet. The red square is the intended Agilkia landing site, and the blue region is where Philae is thought to have actually landed. Image Credit: ESA

“We have 1.5 hours of sunlight at less than 1 watt, and 20 minutes of 3 or 4 watts. The lander needs 5 watts to boot….In order to charge the secondary battery, we have to heat it to 0 degrees Celsius. We need about 50-60 watt-hours a day in order to reach 0 degrees and still have daylight left to charge the battery. So it doesn’t look that great. What we could hope for is if we are closer to perihelion, near 1 AU, maybe we could have enough energy on our one solar panel, maybe every once in a. Having a communication link requires additional power again,” Lommatsch said.

Despite these setbacks, Philae’s mission overall has been a huge success. All ten of the lander’s science instruments have been turned on and have collected some data. Jean-Pierre Bibring, principal investigator for Philae’s CIVA instrument, stole the show at a secondary press conference when he revealed six stunning panoramic images depicting a 360 degree view of the area surrounding Philae.

Originally, when the team looked at this image, the portion of the sky in our view gave the impression that Philae was on its side. However, as Lommatsch tells us, “Philae is not toppled over, but surrounded by rocks — like in a corner. All three legs are on the ground, and we have not moved after the final bounce.” CIVA’s 6-image panorama of the region around Philae. Annotations have been added to better understand what we’re looking at. Image Credit: ESA / Rosetta / Philae / ÇIVA / annotated by Emily Lakdawalla

Philae was equipped with three separate anchoring systems, designed to keep the lander firmly attached to the comet. As the data came in, it was discovered that all three systems: cold gas thrusters; harpoons; and foot screws, all failed.

Philae is now at the mercy of gravity. As such, the team was hesitant in using certain instruments, like the drill, for fear the torque might send the lander flying. However, due to the short life expectancy of the lander, the science team decided to switch on the drill and attempt to collect subsurface samples.

At the time of this morning’s hangout, the team reported the drill was functioning nominally, having drilled a total of 9 inches (25 centimeters) from the base plate. No one knows for sure yet if that depth means Philae actually broke ground. If the lander has enough battery power, and can respond to commands when the communication link comes back up, we could potentially have the first subsurface sample of a comet. The sounds of Comet 67P have been recorded and have been described as the comet “singing.” Image Credit: ESA

Over the next 3-4 days, 84 images from Rosetta’s OSIRIS camera should be coming in. Since the team has been unable to pinpoint Philae’s exact location, they are hoping these images will contain rebound evidence and can determine the direction in which Philae bounced.

Rosetta will continue to orbit comet 67P and will make periodic flybys, very close to the surface and she continues her mission. If Philae is unable to resume communications, the team remains hopeful that as the comet moves closer to the Sun, the rising temperature and change of seasons will provide the boost Philae needs and we may get a response, if not tomorrow, hopefully in the coming months. All of Philae’s data is stored within the lander, so even if it is months from now, if Philae can power up, we will have access to any data collected.

Stay tuned as Spaceflight Insider continues to bring you updates as they become available.