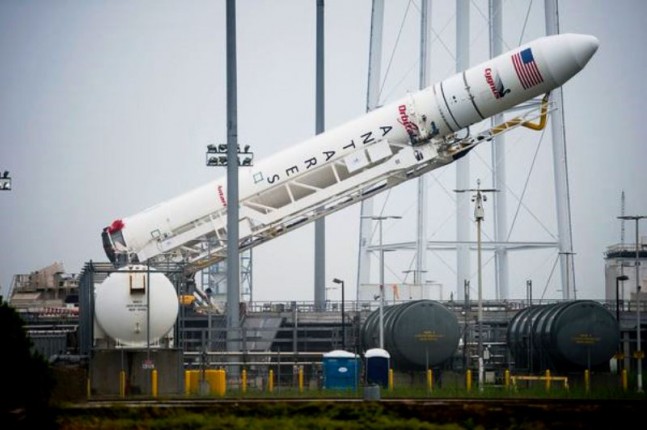 WALLOPS ISLAND, Va –After being postponed several times due to circumstances involving SpaceX’s CRS-3 payload being temporarily grounded, as well as an AJ-26 engine failure and severe weather, Orbital Sciences Corporation’s (Orbital) Antares booster and Cygnus spacecraft are ready for flight. The ORB-2 mission will launch this weekend from Pad 0-A out of the Mid-Atlantic Regional Spaceport (MARS). After slipping a day from the previous date date of July 11, it has been confirmed that Saturday, July 12 is now the new targeted launch date aiming for a 1:14 p.m. EDT (1714 GMT) launch time. No launch window has been confirmed yet.

A recent update provided by Orbital Sciences Corporations has stated the following: Antares rises at Pad-0A during the first flight of the rocket in April of 2013. Photo Credit: Mark Usciak / SpaceFlight Insider

The engineering team that is investigating the failure of an AJ26 engine during an acceptance test at Stennis Space Center recommended that certain inspections be performed on the two AJ26 engines that are currently integrated on the Antares rocket. These inspections were recently completed and program officials have cleared the rocket for flight.

This mission, dubbed ORB-2, will be the second official launch in conjunction with Orbital’s Commercial Resupply Services (CRS) contract with NASA, which enables them to deliver supplies to the crew aboard the International Space Station (ISS). SpaceX is working under the same contract with their Falcon 9 rocket and Dragon capsule.

On Thursday, July 10, Antares and its Cygnus capsule were rolled out to the launch pad at MARS, which is located near Chincoteague, Virginia, in preparation for the launch. The original rollout attempt on the evening of July 8 was cancelled due to severe thunderstorms in the area. If the launch goes according to plan, the two-stage Antares rocket will boost Cygnus and its 3,653 lbs (1,657 kg) of cargo, including various experiments, into orbit.

With a launch sequence lasting about 10 minutes from liftoff through the separation of the 3.9 meter payload fairing, Cygnus will then: deploy its solar arrays and undergo initial check-out. The spacecraft will then conduct a series of thruster burns to raise its orbit to bring it within 2.5 miles (4 km) of the ISS prior to receiving authorization to autonomously rendezvous with the station. When the vehicle approaches to within 12 meters, the astronauts will use the station’s robotic arm to grapple Cygnus and berth it to the Harmony node of the station. Despite the almost 24 hour slip, rendezvous and berthing with the International Space Station will still occur on Tuesday, July 15 at approximately 7:24 a.m. EDT—three days after the initial launch. Cygnus will then remain berthed to the space station for about 30-40 days while the crew unloads the cargo and reloads it with approximately 1,346 kg of disposable materials. These waste materials, once loaded, will reenter the Earth’s atmosphere and burn up.

Amongst the cargo being delivered to the orbiting laboratory later this month is a series of experiments by the Student Spaceflight Experiments Program (SSEP ). Flying on Friday is Mission 5, an installment of experiments designed and built by students ranging from Elementary School up through High School. Out of 1,344 proposals from all over the country, only 15 were selected to be produced for spaceflight and flown on this week’s mission. With aims to have our astronauts nibbling fresh lettuce and growing their own antibiotics in microgravity, these experiments yet to be conducted are hoping to change the future of human spaceflight, each in their own small way.

“This wide range of subjects illustrates the diversity of the space station as a microgravity research laboratory. These are also experiments that can’t easily be done anywhere else,” said NCESS director Jeff Goldstein, Ph.D. “Typically, researchers change one variable, hold everything else constant, and then see what happens. Gravity is a key variable, one we take for granted and also one that we don’t have the ability to change at will.”

Students who worked on these experiments will be in attendance during Saturday’s launch to watch their creations take to the skies and begin their journey to the space station.

If you are not in the Chincoteague or Assateague area for the launch, Antares can still be seen along the Eastern Seaboard from North Carolina up through parts of New York. Orbital Sciences has provided launch viewing maps for those interested in viewing the launch from afar.

The Antares launch vehicle is described by Orbital as two-stage booster designed to deliver medium class payloads to orbit. At present, all three of the rocket’s prior flights have been focused on sending Cygnus to the ISS, but the Dulles, Virginia-based firm has stated that the booster is available for defense, scientific and other commercial efforts.

The Antares launch system is derived from other proven “legacy” hardware, so as to reduce developmental cost and risk. The booster has a stated capacity to heft some 13,492 lbs (6120 kg) to orbit.

Antares utilizes two Aerojet Rocketdyne AJ-26 engines in the rocket’s first stage. On May 22 of this year, an AJ-26 engine failed on the test stand at NASA’s Stennis Space Center in Mississippi. The subsequent investigation was one of the key contributing factors to the launch being delayed until July 11. Each AJ-26 is hot-fired tested at Stennis prior to being used on actual missions.

The AJ-26 are fueled by rocket-propellant (RP) and liquid oxygen and are independently thrust vectored. The engines produce some 816,000 lbs (3,620 kN) of thrust. The AJ-26 is based off of the Russian NK-33 engine. Under cloudy skies, the Antares booster was rolled out to Pad-0A on July 10. Photo Credit: NASA

Antares’ core tank was designed and verified by KB Yuzhnoye, the core tank itself is produced by Yuzhmash. Both KB Yuzhnoye and Yuzhmash are based out of the Ukraine. KB Yuzhnoye produces the Zenit launch vehicle, currently used by the international firm Sea Launch.

The booster’s second stage is powered by a single ATK CASTOR 30B solid rocket motor. Castor 30B is “steered” via a thrust vectoring system. The second stage guides Cygnus toward its final destination via the Modular Avionics Control Hardware or “MACH.” The CASTOR 30B traces its lineage back to the CASTOR 120 SRM used on Orbital’s Taurus rocket. The engine is comprised of a graphite epoxy wound case along with a flexseal design at the engine’s throat which allows for two axis thrust vector control motion during ascent. The rocket’s fairing measures about 32 feet (9.9 meters) in length and about 13 feet in diameter (3.9 meters). Constructed with a honeycomb sore and composite surface, the fairing will protect the Cygnus spacecraft on its way out of Earth’s atmosphere and into the black. The fairing is made from two graphite composite halves. Joined with what is known as a frangible (breakable) rail joint. This system allows each of the fairing’s two halves to rotate on hinges which are mounted to the second stage’s fairing cylinder.

Through the boosted and coast phases Antares is guided by the Attitude Control System or “ACS.” ACS provides three-axis control for the rocket while the Main Engine System provides yaw, pitch and roll control during the first stage of powered flight.

Once the second stage of flight begins the CASTOR 30B along with the ACS. Guided by a set of data determined after first stage separation, the remaining course corrections are made and Cygnus is guided on its way to the ISS.

As with the two prior flights of Cygnus, this spacecraft will be named in honor of a spaceflight veteran who has passed away. The first flight of the vessel on September, 18, 2013 was christened the David G. Low, in honor of an astronaut who played a pivotal role in Orbital’s efforts. On January 9, 2014, Orbital sent the Gordon C. Fullerton to orbit. It was named in honor of another space flyer, one who had piloted a B-52 with one of Orbital’s Pegasus air-launched rockets. When this Cygnus takes to the skies, it will be named the Janice Voss. Voss served Orbital as flight operations support. She passed away in February of 2012.

Please check back with SpaceFlight Insider for updates regarding the upcoming mission and be sure to watch our Mission Monitor during the launch.