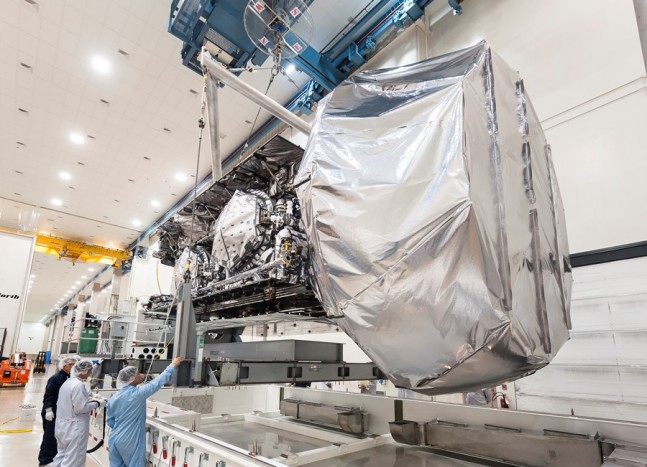 CAPE CANAVERAL, Fla — Colorado-based United Launch Alliance (ULA ) has the most powerful version of the Atlas V, in its 551 configuration, ready for flight. The payload for the planned Jan. 20 launch is the third Mobile User Objective System (MUOS-3 ) satellite. If everything goes according to plan, MUOS-3 will take to the skies from Cape Canaveral Air Force Station’s Space Launch Complex 41 (SLC-41) in Florida at 7:43 p.m. EST (2343 GMT). Tomorrow’s flight will mark the first launch of the year for ULA – which has some 13 launches on the manifest for 2015.

MUOS will be a fleet of geosynchronous satellites that are being deployed on behalf of the U.S. Department of Defense (DoD). Tomorrow’s flight will deliver the third of five planned MUOS spacecraft to orbit which will relay their data back to four ground stations. These satellites are designed to provide narrowband connectivity at a rate of about 384 kilobytes per second. The MUOS-3 spacecraft, safely cocooned within its five meter Payload Fairing or “PLF” is raised into positioned above the Atlas V booster core at the Vertical Integration Facility or “VIF” at Cape Canaveral. Photo Credit: ULA

MUOS is a Ultra High Frequency (UHF) system that transmits in the 300 MHz to 3 GHz frequency range and is meant to replace the UHF Follow-On (UFO) satellites currently in service.

The five MUOS spacecraft are being sent aloft so as to provide improved mobility, accessibility and capacity and are primarily for use with mobile platforms, such as vehicles, aircraft or ships at sea. MUOS satellites are capable of relaying voice transmissions, video or data beyond line of sight. The fleet will consist of four operational spacecraft and a single on-orbit spare.

The lead developer on MUOS is the United States Navy’s Communications Satellite Program Office of the Program Executive Office for Space Systems – based out of San Diego, California with Lockheed Martin serving as the prime systems contractor and designer.

“MUOS is a game changer in communications for our warfighters and will allow them to have high-fidelity voice conversations, networked team calls and data exchange, including video, with anyone connected to a secure terminal around the world,” said Lockheed Martin’s Vice President of Narrowband Communications Iris Bombelyn. “The launch of MUOS-3 will increase our network coverage to about three-quarters of the globe.”

Instead of utilizing of cell towers, the system will use geosynchronous satellites. In so doing, the MUOS fleet will be able to provide communications services – even in non-industrialized parts of the world. This includes jungle locations, a normally restrictive environment due to thick forests.

The cost-plus-incentive-and-award-fee for MUOS has been estimated at costing approximately $2.1 billion and is based on a period-of-performance period of seven years. This is comprised of a baseline consisting of just two spacecraft as well as the related ground control components. Contract options, if they are selected, could add an additional four years and $1.1 billion to the base amount and in so doing bring the total cost of MUOS to $3.2 billion. Besides Lockheed Martin, other companies contributing to the production and fielding of these spacecraft include General Dynamics, Boeing, and Harris Corporation.

The MUOS-3 spacecraft was delivered to Cape Canaveral on Nov. 6 of last year and was encapsulated into the Atlas V Payload Fairing or “PLF” on Dec. 19, 2014.

“With the launch of the third satellite in the constellation, to be followed later in 2015 by the fourth, MUOS will be in place to provide pole-to-pole and global, secure communications for the warfighter,” Bombelyn said.

The engine burns a mixture of liquid kerosene and liquid oxygen or “LOX” as fuel and utilizes a two-thrust-chamber. The engine is also equipped with hydraulics for control valve actuation and thrust vector gimbaling, pneumatics for valve actuation and system purging, and a thrust frame designed to distribute loads.

The Atlas V’s upper stage measures about 92 inches (234 cm), has a diameter of 46 inches (117 cm) and uses an RL-10A engine for thrust. The RL-10A uses liquid hydrogen and liquid oxygen as propellant. The engine has nearly 400 flights on record and has performed almost 700 firings in space. The RL-10A has a thrust of about 23,300 lbs with a  specific impulse of about 451 seconds.

The Atlas V variant of the rocket has been in service since 2002, with the rocket proving its viability with a near perfect success rate (only a single mission has been listed as a partial failure – the flight of NROL-30 / NOSS-3 in June of 2007).

The rocket’s various components hail from points across the continental United States and abroad. Facilities located in Decatur, Alabama, San Diego, California, Harlingen, Texas and Denver Colorado – all play their part. The booster’s first stage engine, the RD-180, is produced by NPO Energomash and the fairing, the shield for the rocket’s precious cargo, comes from Zurich, Switzerland.

The V 551’s first stage measures some 107 feet (32.5 meters) in length, and is fueled by a mixture of Rocket Propellant 1 (RP-1), a highly-refined version of kerosene along with liquid oxygen, which serves as the oxidizer. The thrust produced from the RD-180 is directed through two nozzles. These nozzles in turn can each be maneuvered about 8 degrees and, in so doing, direct the rocket on the proper heading so as to deliver the payload to the proper orbit. The launch of MUOS-3 will be the first launch of the year for ULA, which launched fourteen missions in 2014.

The RD-180 is described in greater detail in this SpaceFlight Insider article by Florida Institute of Technology intern Amoree Hodges.