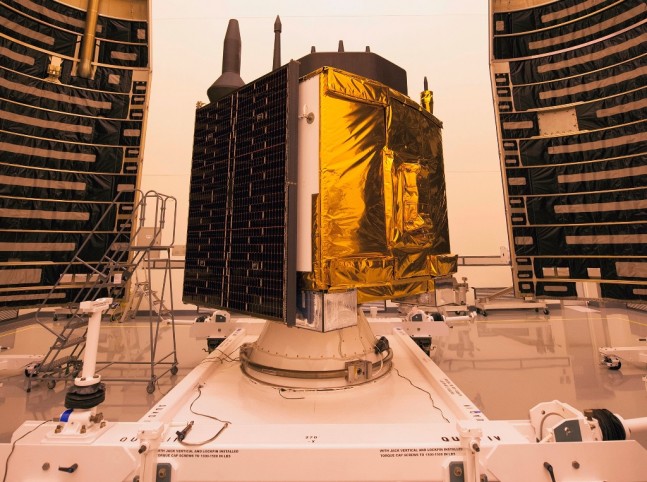 The window is set to last some 19 minutes, closing at 11:52 a.m. EDT. At present, the primary issue that might cause a delay in the flight is what Florida is famous for – its turbulent weather.

The Block IIF version of the Global Positioning Satellites (GPS) that are currently being sent to orbit are used to provide navigation-based services to members of the United States military. Land, sea, and air operations are all supported via GPS. However, civilians also use data from these spacecraft in their day-to-day lives as well. GPS renders information pertaining to time, location, and speed. The Block IIF version has been dubbed an interim class of these satellites, which are being deployed to deliver more signals with greater accuracy and performance. The Block IIF is meant to replace the GPS Block IIA satellites currently on orbit, which were placed there between 1990 and 1997 (each of the Block IIA was supposed to operate for a period of about seven and a half years).

Meant to keep the Navstar GPS constellation working until the Block IIIA spacecraft can be fielded, the satellites are constructed by The Boeing Company based on the AS-4000 bus and managed by the U.S. Air Force.

Each satellite has an estimated mass of some 3,590 lbs (about 1,630 kg) and is expected to last some 12 years. Orbiting at a distance of some 12,710 miles (20,460 km) above the Earth, the Block IIF series reside in a semi-synchronous medium-Earth orbit. They complete their orbital period about once every twelve hours.

The march of progress has seen Evolved Expendable Launch Vehicles or “EELVs” that are more capable than their predecessors. For the Block IIF, this means that the need for apogee motors is no longer required as today’s rockets, especially the Atlas V and Delta IV family of boosters can send satellites directly into their operational orbits.

The contract for the Block IIF satellites was inked back in 1996 and required that some 33 of the spacecraft be built (that has since been revised to just 12 satellites). The first launch, slated to take place in 2006, was pushed back to 2010 due to delays and technical issues. Tomorrow’s launch will be the 55th flight of the Atlas V since it first took to the skies in 2002 and the 27th of the 401 variant of this reliable booster. The only other Atlas V 401 launch that remains for this year is the planned Orbital ATK Cygnus launch to the International Space Station. That launch is scheduled to take place this November.

If everything continues to go according to the current schedule, the remaining GPS IIF satellites should be on orbit by the start of next year.

“ULA launch vehicles have delivered all of the current generation of GPS satellites, which are providing ever-improving capabilities for users around the world,” United Launch Alliance’s vice president, Atlas and Delta Programs, Jim Sponnick said during the launch of the GPS IIF 7 satellite last year.

Originally operated by Lockheed Martin, the Atlas V is one of the two boosters currently operated by ULA (the other being the Delta IV family of boosters) and the company hopes to begin fielding its new Vulcan rocket within the next four years). The Atlas V has a near-perfect success rate, with only the partial failure encountered during the July 2007 launch of the USA-194 (NRO L-30/NOSS-4-3A & B) marring its track record.

The Atlas V is capable of flying in an array of configurations, including the 411, 421, 431, 501, 531, 541, and 551. The nomenclature refers to the size of the payload fairing (variants include the four and five meter); the second number stands for the amount of Aerojet Rocketdyne-produced AJ-60A solid rocket boosters that the booster uses. The final digit is the number of Aerojet Rocketdyne RL-10 rocket engines that are incorporated into the rocket’s Centaur Upper Stage.

The Atlas V uses a single RD-180 in its first stage, the thrust of which is channeled through two engine nozzles. Produced by Russian aerospace firm RD-AMROSS, the engine has been the focal point of much controversy since Russia’s military actions in Ukraine last year (2014).

ULA has since developed and worked to produce the Vulcan family of boosters, which the company hopes to begin flying as early as 2019. If everything goes according to plan, Vulcan will move away from the RD-180 and instead use Blue Origin’s BE-4 liquid oxygen/methane rocket engine.

For his part, Sponnick has highlighted the methodology to which ULA views the handling of these missions.

“This entire team is focused on 100 percent mission success, one launch at a time, and also providing on-time launches to meet our customer’s mission needs,” Sponnick said.