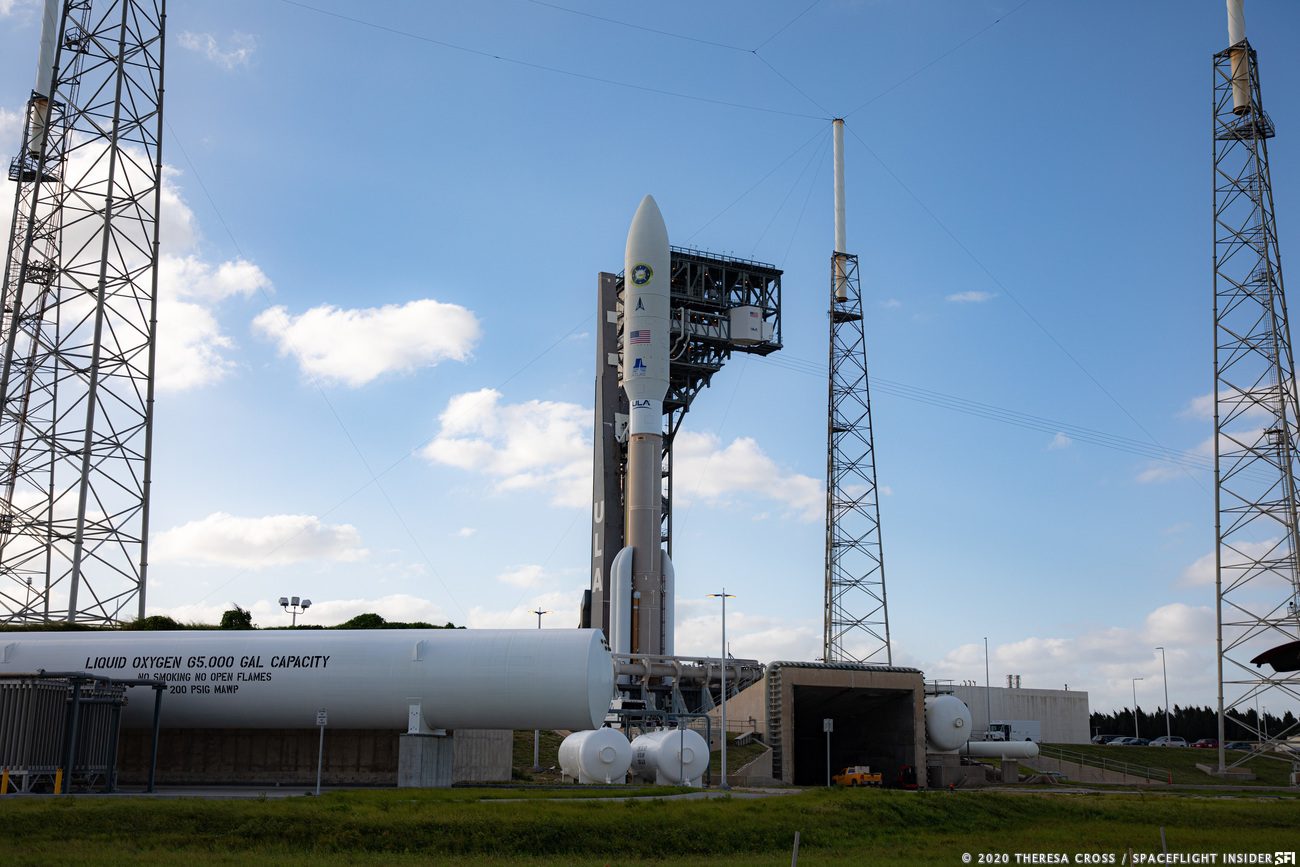 Due to the highly classified nature of the payload, it is not publicly known what the satellite is capable of, or what purpose it will serve. United Launch Alliance (ULA) however, has a storied history working with the National Reconnaissance Office (NRO) and fulfilling its space lift needs. Gary Wentz, ULA vice president of Government and Commercial Programs, spoke on that history. “ULA is proud to play a pivotal role in support of our mission partners and national security by keeping our country safe one launch at a time… We thank our mission partners for their continued trust and teamwork. The NROL-101 mission will be ULA’s 29th mission launched for the National Reconnaissance Office and the 17th NRO mission launched on an Atlas V.” 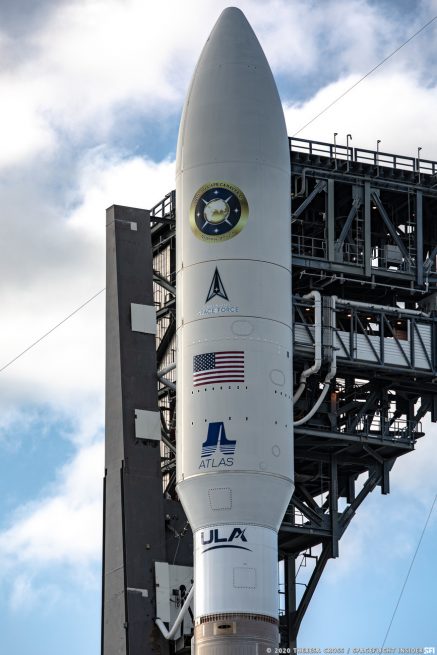 This launch also serves as the first flight of the new 63 Inch Graphite Epoxy Motors (GEM 63) developed by Northrop Grumman. Measuring 63 inches in diameter and standing at 66 feet tall, the new boosters will burn for 94 seconds, each producing over 371,000 pounds of thrust. The boosters are a more cost effective drop-in replacement for the prior motors used on Atlas, the Aerojet Rocketdyne AJ-60A, and will ultimately be elongated to an XL configuration for use on ULA’s upcoming Vulcan rocket.

The new launch attempt comes following a 24 hour delay that was called on Monday afternoon. Following the rollout to the launch pad, the upper payload environmental control system experienced a flow rate reduction, requiring the launch team to roll the rocket back into the Vertical Integration Facility. ULA CEO Tory Bruno tweeted that the very high winds occurring at the launch pad may have caused the issue, believed to be a damaged duct, and that it would need to be inspected.

The Atlas V rocket will be flying in the 531 configuration, utilizing a 5 meter payload fairing and 3 solid rocket boosters. Liftoff is currently scheduled for Wednesday Nov 4, at 5:54 PM EST from Cape Canaveral Air Force Station Launch Complex 41. Should an issue occur, the launch team will have until 8:06 PM EST to resolve the issue and launch within the window. Current weather reports from the 45th Space Wing’s 45th Weather Squadron indicate a 70% chance of launch, with the primary concern being excessive ground winds. The mission will be the 86th launch of the Atlas V rocket, and the 71st from SLC-41. 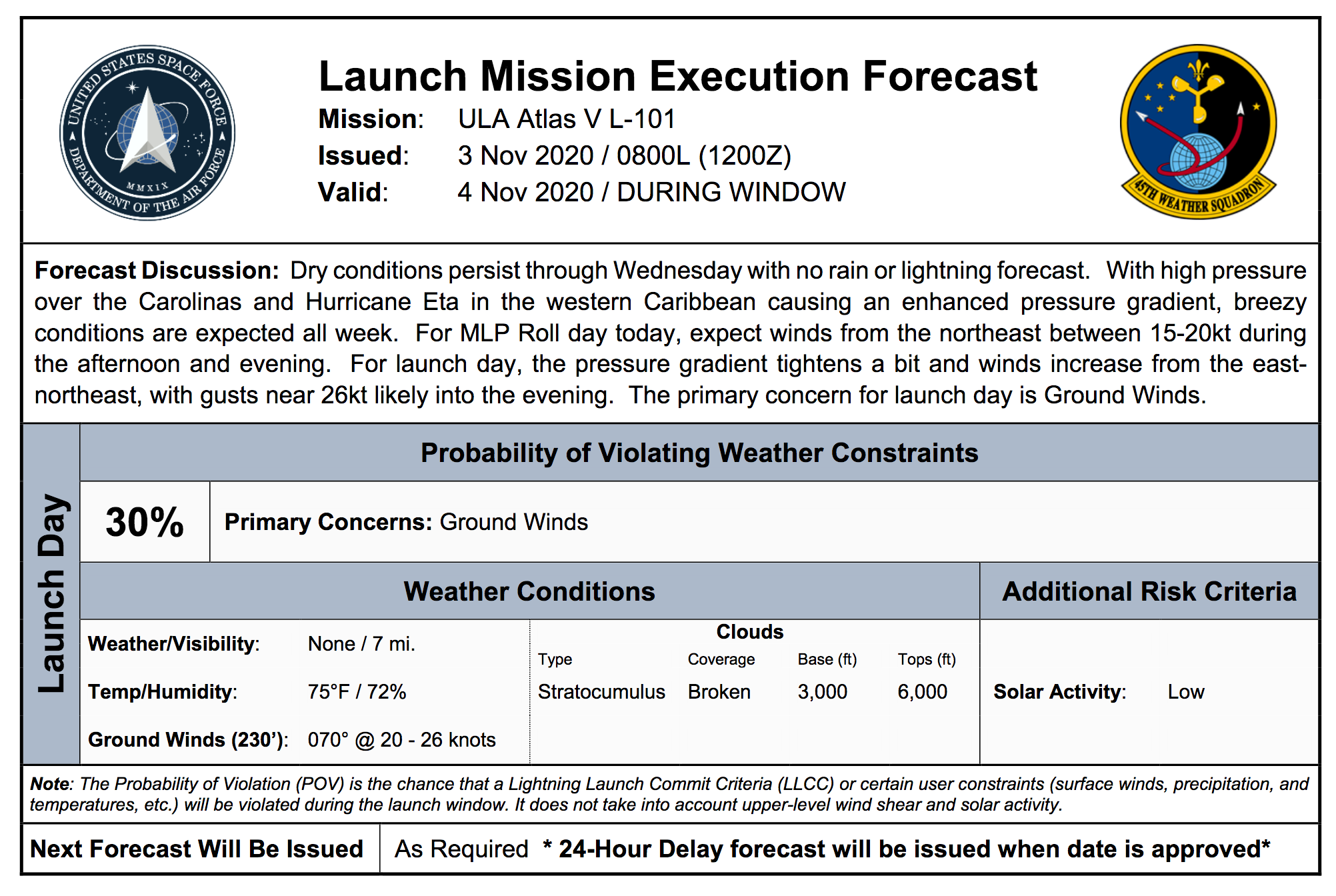