MERRITT ISLAND, FL – After a record-breaking 780 days on orbit the United States Air Force’s secretive space plane, the X-37B, touched down on Runway 33 at the Shuttle Landing Facility at Kennedy Space Center on Oct. 27, 2019.

The landing marked the completion of the Vehicle’s fifth orbital mission. Dubbed OTV-5, the fifth mission for the X-37B lifted off from Cape Canaveral Air Force Station inside the fairing of a SpaceX Falcon 9 rocket on Sept. 7, 2017. The spacecraft spent a total of 779 days, 17 hours, and 51 minutes on orbit, completing secretive scientific experiments. 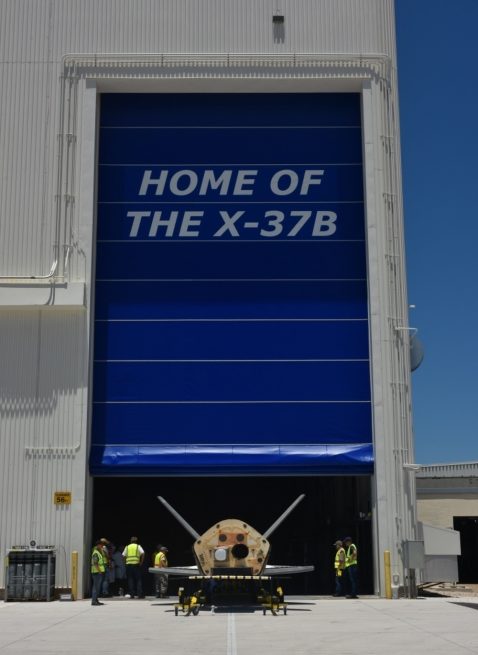 An OTV space plane at one of the former Orbiter Processing Facilities at Kennedy Space Center in Florida. Photo Credit: U.S. Air Force

“The safe return of this spacecraft, after breaking its own endurance record, is the result of the innovative partnership between government and industry,” said Air Force Chief of Staff Gen. David L. Goldfein. “The sky is no longer the limit for the Air Force and, if Congress approves, the U.S. Space Force.”

The OTV-5 mission carried a variety of Pico satellites, including an experiment known as the Advanced Structurally Embedded Thermal Spreader II, which was ws designed to test the effects of a thermal environment on orbit.

After spending two years circling our world, OTV-5 wrapped up with the X-37B completing its second successful landing the Shuttle Landing Facility in Florida.

“This program continues to push the envelope as the world’s only reusable space vehicle. With a successful landing today, the X-37B completed its longest flight to date and successfully completed all mission objectives,” said Randy Walden, Air Force Rapid Capabilities Office director. “This mission successfully hosted Air Force Research Laboratory experiments, among others, as well as providing a ride for small satellites.”

The Air Force has kept the primary missions of the X-37B secretive since its inception. It’s first mission, OTV-1, found the vehicle spending 224 hours on orbit. It concluded its mission by landing at Edwards Air Force Base in California.

The sixth mission for the X-37B is currently scheduled to take place sometime in mid-2020. The expected launch vehicle is a United Launch Alliance Atlas V 501 configuration. The current duration of this mission is classified.

“This spacecraft is a key component of the space community. This milestone demonstrates our commitment to conducting experiments for America’s future space exploration,” said Lt. Col. Jonathan Keen, X-37B program manager via an Air Force post.

While Keen’s statement denotes that the OTV-5 mission was involved with space exploration. It is unclear if that research required over two years to complete.