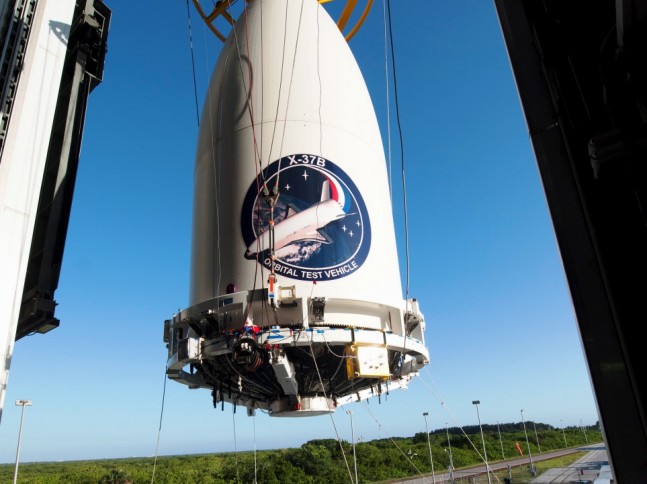 CAPE CANAVERAL, Fla — On Wednesday, May 20, United Launch Alliance (ULA ) and the United States Air Force are planning to launch the 501 configuration of one of the Colorado-based firm’s Atlas V boosters. The payload for this flight is the U.S. Air Force’s X-37B mini shuttle. This mission will not only see the fourth flight of the reusable craft, but also witness the launch of an experiment for the United States Air Force – and a solar sail experiment for The Planetary Society.

Liftoff is currently scheduled to take place on May 20 from Cape Canaveral Air Force Station’s Space Launch Complex 41 (SLC-41). The four-hour long launch window is scheduled to open at 10:45 a.m. EDT (14:45 GMT). At present, weather predictions with anywhere between a 50 and 70 percent chance of various weather restrictions possibly preventing launch. Referred to on its prior flights as Orbital Test Vehicle or “OTV” (1,2, and 3 respectively for each mission), this fourth flight will fall under the AFSPC banner. The payload fairing with the X-37B spaceplane is affixed to the top of the Atlas V 501 launch vehicle. Photo Credit: ULA

For NASA, the flight of the X-37B will be a mission that will test out concepts derived from data from the International Space Station (ISS). The Materials Exposure and Technology Innovation in Space (METIS ), experiment will ride the mini shuttle aloft.

Nearly 100 different materials will be exposed to the harsh environment found on orbit for a long duration stay – one that the X-37B has demonstrated a unique capacity to carry out.

“By exposing materials to space and returning the samples to Earth, we gain valuable data about how the materials hold up in the environment in which they will have to operate,” said Miria Finckenor, the co-investigator on the MISSE experiment and principal investigator for METIS at NASA’s Marshall Space Flight Center in Huntsville, Alabama. “Spacecraft designers can use this information to choose the best material for specific applications, such as thermal protection or antennas or any other space hardware.”

METIS is designed to follow in the footsteps of the Materials on International Space Station Experiment (MISSE ). This mission saw more than 4,000 samples of various materials exposed to open space from 2001 to 2013.

NASA has stated that the METIS experiment will be able to yield data about how different materials respond to the vacuum of space after being on orbit for more than 200 days. One of the first hints of how long this mission is currently scheduled to last. If the AFSPC-5 mission lasts for a little over seven months, it will be the shortest mission for the craft to date. This will mark the fourth time that one of the U.S. Air Force’s X-37B spacecraft has flown. Photo Credit: ULA

On its prior missions into the blackness of space, the uncrewed craft has carried out the following missions, each of which stayed on orbit longer than the prior flight:

While most of the payload for the prior flights of the X-37B were classified, there are at least two on board this fourth flight of the tiny shuttle that have been made public. Perhaps one of the prevalent being the flight of the LightSail technology demonstrator. This experiment will test out the feasibility of using solar sails as a means of propulsion. Developed and managed by The Planetary Society, the LightSail experiment that will ride ULA’s Atlas V aloft is just the first step.

The organization plans to launch a more advanced version of the craft in 2016 atop a Space Exploration Technologies (SpaceX ) Falcon Heavy booster. This will mean that both LightSail as well as METIS will have ties to the NewSpace company.

“When we flew newly developed static-dissipative coatings on MISSE-2, we did not know they would be used for both the Curiosity rover and the SpaceX Dragon,” said Finckenor. “Some program we don’t know about now will be successful because engineers found the data they needed.” LightSail will be contained within what is known as a P-POD on the ULTRASat module. Photo Credit: Naval Postgraduate School

LightSail will fly as one part of a grouping of CubeSats which has been named “ULTRASat”. LightSail is contained within ULTRASat in one of the Poly-Picosatellite Orbital Deployers, or P-PODS. These P-PODS are used to deploy their individual payloads into space.

This fourth flight of the OTV/X-37B will also work to validate an electric propulsion system that, according to a report appearing on SpaceFlight Now, was jointly developed by the Air Force Research Laboratory and Space and Missile Systems Center.

The objective for this flight is to validate the design and performance capabilities of the Hall Current Thrusters which will be utilized on future versions of the military’s Advanced Extremely High Frequency (AEHF) communications satellites.

The U.S. Air Force’s 45th Space Wing was forced to alter normal operating procedures for this mission due to an increased threat condition caused by the Islamic State of Iraq and Syria (ISIS). Threats issued by this Islamic terrorist organization caused the heightened national Force Protection Condition (FPCON ) Bravo threat level to be activated. According to the 45th, this is an anomaly.

“We don’t think that this threat condition will affect any other missions besides this one,” Chris Calkins, a spokesperson for the 45th Space Wing told SpaceFlight Insider.

The 501 configuration of the Atlas V booster for this mission is somewhat unique in terms of recent launches and predicated by the 14 ft 11 in (4.5 m) wingspan of the spacecraft. This version of the Atlas uses a five meter fairing, uses no solid rocket boosters, and has a single engine in the booster’s upper stage.

However, in the case of the X-37B, what it lacks in size, it makes up for in staying power. The longest mission for any of NASA’s crewed shuttles was approximately 18 days – the X-37B has conducted stay of more than a year.

Fifteen seconds shy of the four minute mark, the payload fairing will be jettisoned, If everything proceeds as mission planners hope the X-37B and its various payloads will be set free to carry out their missions about 19 minutes after lifting from from SLC-41.

Centaur has a long legacy, one that has helped to send missions to every planet in the Solar System as well as the Moon and the dwarf planet Pluto.

If everything goes as advertised on launch day, the Atlas V will lift off, and after about a minute and a half of flight, it should pass through the region of the atmosphere known as “max-Q” (maximum dynamic pressure). This portion of the flight sees the booster and its precious cargo placed under the greatest amount of stress.

Hopefully the X-37B will land at Kennedy and the USAF will start using the Shuttle hangers for processing. From what I’ve heard and read, NASA has been delaying this move by making the Air Force jump thru many hurdles. Seems like NASA is always preventing new jobs at KSC.