Photo Feature: Set fire to the rain – the flight of ULA Delta 368 with AFSPC-4 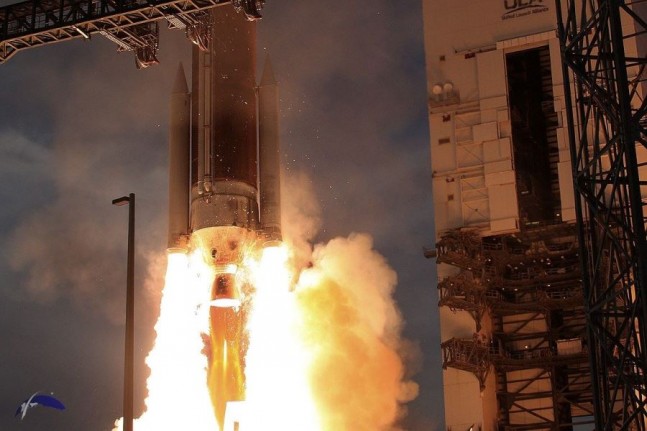 CAPE CANAVERAL, Fla — Launching a rocket to orbit – is never routine. Anyone who tells you otherwise – is either unaware of the difficulty involved – or is not being honest. United Launch Alliance, comprised of elements of Lockheed-Martin and Boeing – proved that this past week with the launch of a Delta IV Medium+ 4,2 and its payload of three satellites under the AFSPC-4 banner. It was made clear that even an organization with 100 years combined experience can still be stymied in sending payloads aloft. Such was the case on July 23 when ULA first tried to send the Delta aloft when problems with ground support equipment saw the launch scrubbed. ULA’s run of bad luck would not end there – far from it. Mother nature had decided that the Colorado-based firm would have to wait almost a week before the rocket would take to the skies.

On July 24, 25 and 26, ULA tried again and again – but met with the same results – scrub. Powerful storms dominated the Space Coast region during that time with lightning tearing through the skies and even a tornado warning for Brevard County was announced.

ULA kept at it, even when their representatives were forced to stay indoors during a Phase II lightning warning – they took the time to contact the media, to apologize for their absence and to coordinate the next day’s attempt.

Some have tried to compare the scrubs ULA faced to those of SpaceX’s Falcon 9 with its six Orbcomm OG2 spacecraft. This is a false comparison, SpaceX’s issues saw the Orbcomm OG2 launch delayed 10 months and were mostly caused due to technical issues. The issues that resulted in the delay of the AFSPC-4’s launch – caused a slip of less than a week and were caused mostly due to weather. We were very fortunate to have Alex Polimeni join us as our intern this summer. A thirteen-year-old from New Jersey, Polimeni has a passion for spaceflight as well as willingness to give his all. He trudged through the sandspurs and mosquitos and worked to ensure that our cameras were functioning as advertised – despite the repeated delays.

Talking Space’s Sawyer Rosenstein made a trip up to see the launch, but only having one day – was forced to call a scrub of his own and head home after the July 26 scrub. It was disappointing that he didn’t get a chance to see the launch. Talking Space is one of SFI’s many partners and it’s always good to be able to have the chance to work together.

Closer to home, SpaceFlight Insider’s Mike Deep stayed for as long as he could, but after three delays – he had to head back to Tampa to work his normal job. The remaining team members collected and returned his remote cameras to him.

SFI’s team reports on the events, they take the time, put in the long hours, and work to produce a great product. The reason behind this is simple – anyone can make a statement – but the people worth listening to – are those that are actually there when the rain and lightning come crashing down. Anyone can make claims – few, however, are willing to put in the time as the launch delays add up, the resources dwindle and the nerves fray. Those few however – are to be admired for their constant professionalism. We hope that our readers will review the results of their labors – and agree.