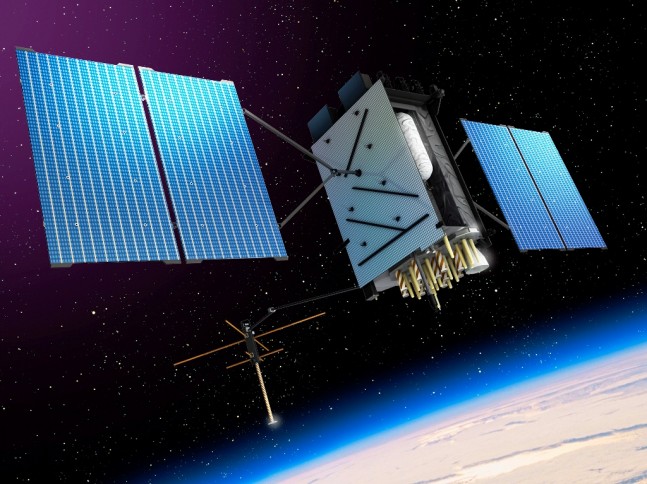 In the modern era, we have become accustomed to technological devices which help us navigate, both figuratively and literally, our way through our lives. Perhaps one of the systems which we most take for granted is the Global Positioning System or “GPS”. This orbital network has been tracing unseen arcs in the skies above our world for more than 37 years. Those spacecraft already on orbit are about to be joined by the next-generation of these important spacecraft – GPS III.

The system module for the first of these new satellites was lowered using a 10-ton crane over its propulsion core this past week, joining these two halves into a single spacecraft. A part of the U.S. Air Force’s new fleet of navigational satellites, GPS III space vehicle one (SV-01) is stated as having three times better accuracy than its predecessors and is eight times better equipped to fend off jamming attempts.

“The final integration of the first GPS III satellite is a major milestone for the GPS III program,” said Mark Stewart, vice president of Lockheed Martin’s Navigation Systems mission area. “This summer, SV 01 will begin Thermal Vacuum testing, where it will be subjected to simulated harsh space environments. Successful completion of this testing is critical as it will help validate our design and manufacturing processes for all follow-on GPS III satellites.”

At present, Lockheed Martin is under contract to produce eight of the Block III GPS satellites at a processing facility tasked specifically with their manufacture.

Several of the GPS III’s components were brought together during the systems integration event with its systems module containing the following: the Navigation Payload, which improves maintaining the proper position as well as navigation and timing; the functional bus, which holds the electronics that handles the satellite’s operations; and the propulsion core, which provides the craft with the ability to move while on orbit.

An array of organizations are collaborating to manage this new fleet of navigation satellites, they include the Global Positioning Systems Directorate, located at the U.S. Air Force Space and Missile Systems Center, and the Air Force Space Command’s 2nd Space Operations Squadron (2SOPS), based at Schriever Air Force Base in Colorado. Management and the day-to-day operations of the fleet will be handled for both civilian and military users by 2SOPS.

The GPS Block III’s were gestated into existence way back in 1998, with a hard push from Al Gore among others. The GPS system had only been operational 3 years before the technology became dated, and an update was deemed necessary. Congress agreed and the GPS-III program was funded in 2000 and signed by Clinton. Clinton also made sure the military chokehold on GPS was loosened up and more civilian access—therefore applications —ensued. Now we can’t live without GPS in our daily lives, and most folks have little grasp of how vital they are.

Yet the GPS BLock III’s became a classic example of military contractor-DOD-Congressional blundering and and maybe even corruption. Budgets blown development twisted, bickering finger pointing and backstabbing…all of that. The first Block III was supposed to have been flown a decade ago, yet it won’t even be launched before mid-2016 , if that. Only 8 of the 12 Block II-F ( “F” for Fallback) have been launched.

By now we should have GPS Block IV in the pipeline. I’d like to see the full investigative exposé on the Good, the Bad, and the Ugly about our flagship GPS program history. Oh heck…ALL of our civilian science and service satellite systems are struggling , just when we need them most and should be replenishing them.

Dewey, definitely overran budget and I think we’d all like to see where all that money went. The Air Force certainly isn’t happy about it. But the last of the IIF’s are going to be launched by January. There are 9 in orbit, not 8. Another one launches in June, one in September, and last in January. Each set of Block II’s has been better than the last, with IIF being pretty impressive.

Also forgot to mention that the Block IIIA’s were supposed to originally launch in 2014, based on the initial funding in 2000. They are now targeting 2016 launch. Not that far behind schedule, but still inexcusable.