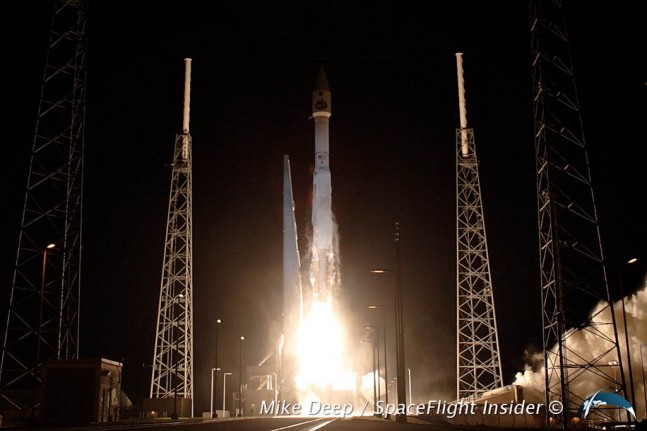 A classified payload for the National Reconnaissance Office (NRO), NROL-35, is scheduled to take to the skies on Thursday, Dec. 11, from Space Launch Complex 3 at Vandenberg Air Force Base located in California. It is currently scheduled to launch at 7:17 p.m. PST (0317 GMT), within a two-hour launch window opening at 6 p.m. and lasting until 8 p.m. PST (0200 to 0400 GMT).

Regarding the NROL-35 payload itself, little has been said. The only mission description given by United Launch Alliance (ULA ), whose Atlas V 541 rocket will carry the payload, is, “The mission will be launched for the National Reconnaissance Office in support of national defense.” The classified payload of NROL-35 sheathed in its fairing. Photo Credit: ULA

It has become popular for those who follow spaceflight to scrutinize NRO mission patches in search of clues to their classified purposes. The patch for NROL-35 features a purple-haired woman in a black-and-purple dress, with a trident in one hand and what appears to be a ball of fire in the other. The fireball has a tail of flame that crosses in front of the woman to wrap around the trident, or the fireball is drawn from the trident, as it is difficult to say for certain. The woman stands before a star-filled sky.

The meaning of this patch may remain mysterious until it is declassified. Unlike many of the other NRO missions, the patch has incited very little speculation. One source has quietly suggested that it is the next generation of the Trumpet and Trumpet F/O electronic intelligence (ELINT) satellites, which operate in a highly elliptical Molniya orbit. Their mission and their capabilities are still classified as well, though the program began in the 1990s.

According to NASA’s National Space Science Data Center, Trumpet satellites are or were “equipped with a large deployable mesh antenna, and…designed to monitor Soviet communications and missile tests.” The Molniya orbit is an ideal orbit for monitoring high-latitude areas of Earth like Russia, so if the guesses about the orbit of NROL-35 are correct, the guess about the mission may be correct as well. Yet this is, and will likely remain, merely unverified speculation and interesting fodder for satellite-watching enthusiasts.

The launch vehicle for the secret satellite (or satellites) is a ULA Atlas V 541 booster. The 541 designation indicates a five-meter payload fairing, four Aerojet Rocketdyne solid rocket boosters and one rocket engine on the Centaur upper stage. Though many Atlas rockets have launched from Vandenberg before now, this is the first time the California coast has seen this particular Atlas configuration, which is the next-to-most powerful iteration of Atlas with its four solid rocket boosters (an Atlas V 551 is also in service).

In fact, this launch also marks the first use of the latest addition to the RL10 engine family, the RL10C. Also produced by Aerojet Rocketdyne, it’s the engine that powers that Centaur upper stage, and its family has a long history of reliability.

This latest version of the RL10 passed its final flight qualification in June of 2013. It is planned to be used as the standard upper-stage engine for future launches of both the Atlas V and Delta 4 family of launch vehicles, with the exception of the two-engine version of the Centaur, as two RL10C engines cannot fit beside each other in that configuration.

Until now, the RL10A has been used on the Atlas while the Delta employed the RL10B. The new variation was built with aspects of each of the previous engines, and it will burn a mix of liquid hydrogen and liquid oxygen propellants, as with the others in the RL10 engine family.

ULA has also been planning a complete new upper stage design concept, the Advanced Common Evolved Stage (ACES), which ideally would have a lower cost, more capabilities, and a longer lifetime in space than the Centaur and the Delta Cryogenic Second Stage.

According to Spaceflight Now, however, “further upgrades to ULA’s rocket upper stages, including concepts to build long-duration deep space tugs and propellant depots, may take a back seat as focus grows on developing a powerful U.S.-built booster engine to end reliance on Russian propulsion.”

The RD-180 engines that are currently used to get the Atlas V off the ground have been the focus of much controversy this year, particularly when SpaceX called an injunction against ULA over the use of the Russian engines in the midst of the crisis in the Crimea. Thursday evening’s launch will mark the 91st launch by ULA since they formed in 2006, and their 14th and final launch for 2014. It will also be the third and final mission for NRO of the year, after NROL-33 in May and NROL-67 in April.

However, the current weather forecast for Thursday does not look promising in terms of meeting launch criteria, with rain almost certain and lightning expected. Currently, there is about a 10 percent chance of favorable weather. If a scrub is called, Friday evening will be the next opportunity.

When NROL-35 does take to the skies, if all goes as planned, the weather officer will declare the conditions “green” for the launch approximately ten minutes prior to the scheduled liftoff time. The Atlas will be fully fueled five minutes later. At that time, the water deluge system, which protects the rocket and payload from being damaged by the acoustical energy (sound) generated during launch, will have its pressure adjusted. When the countdown hits T-4 minutes, the launch status check (also called the “go/no-go poll”) will be held to ensure all systems are operational and ready for launch. If all is well, the flight team will continue with the launch.

Three minutes before liftoff, the rocket’s tanks will be brought to flight pressure. A minute after that, the vehicle will be switched to internal power.

Less than three seconds before launch the RD-180 engine will roar to life. Moments later, the Atlas V rocket will lift off the pad.

About one minute after liftoff, the rocket and its classified payload will pass through the part of Earth’s atmosphere where maximum dynamic pressure, or “max-q,” occurs. At that point, the Atlas will be placed through the highest amount of aerodynamic stress due to the launch vehicle’s high velocity and the pressure of the atmosphere. The RD-180 engine is throttled back for this event. Once the Atlas V passes safely through max-q, that engine will be brought back to its proper strength.

The solid rocket boosters, their mission complete, will be jettisoned at almost two minutes into flight. Unlike the SRBs used on NASA’s retired fleet of space shuttles, these are not meant to be recovered and will fall into the Pacific Ocean.

About three-and-a-half minutes into the flight, the five-meter fairing will be jettisoned and fall back to Earth, revealing NROL-35’s secret payload. What happens with it after that, of course, is classified.

To view the live webcast of the NROL-35 launch, visit the Mission Monitor on Thursday evening (Friday morning GMT). The webcast will end as soon as the first stage has separated, due to the classified nature of the mission.