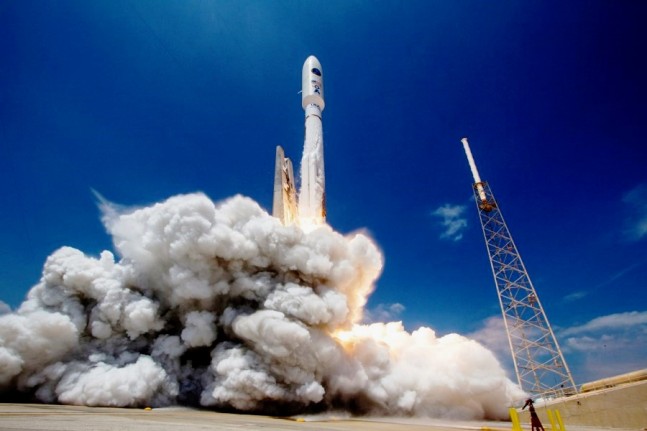 CAPE CANAVERAL, Fla — United Launch Alliance (ULA ) is currently planning to conduct the first launch of the year on Jan. 20, 2015, from Space Launch Complex-41, at Cape Canaveral Air Force Station in Florida. To deliver the payload to orbit, ULA will use an Atlas V 551 launch vehicle to place the Mobile User Objective System (MUOS-3 ) satellite into orbit. The Atlas V family of rockets currently utilize the Russian RD-180 rocket engine to start out the mission. Like most things involved with space flight, the RD-180 has a history filled with triumphs – and controversies. A common misconception is that there are two RD-180s in Atlas V’s first stage. In fact, a single engine uses two nozzles to direct the thrust produced by the Russian-built engine. Photo Credit: NASA

The MUOS-3 satellite and its sister spacecraft was developed to enhance communication on the ground for the U.S. military forces. According to ULA, “MUOS will provide military users 10 times more communications capability over existing systems, including simultaneous voice, video and data, leveraging 3G mobile communications technology.” Although the roughly 15,000 lbs satellite will have a large impact on the communication systems within the U.S. forces, another interesting aspect about this mission is the fact that the engine which powers its first stage is manufactured by one time space flight rival Russia.

The RD-180 engine was developed by NPO Energomash, a Russian engineering company, and functions on liquid oxygen (LOX) and rocket propellant 1 or “RP-1” which is highly-refined form of liquid kerosene. This engine is unusual in that it does not use liquid hydrogen fuel, which is popular among other launch service providers.

About 70 percent of the engine’s components come from its predecessor, the RD-170. The RD-180’s turbo pump and boost pump assembly were the primary components that were constructed for use on the RD-180. Estimates place the rocket engine’s development time at about three-and-a-half years – considerably shorter than if a similar engine was developed and produced by US aerospace companies.

The RD-180 utilizes a dual-combustion chamber and can trace its lineage back to the Soviet RD-170 and RD-171 rocket engines which were used on the Energia booster and are used to this day on Russian Zenit rockets. The RD-180 has two combustion chambers, each of which is fed by a single turbopump. The engine has an oxidizer ratio of about 2.72 which is different than most rocket engines in the United States as it utilizes an oxygen-rich preburner and, in so doing, produces a greater power-to-weight ratio.

The nozzles at the base of the Atlas V family of rockets suggest that there are two engines at work. However, there is just the lone RD-180. The two nozzles allow the Atlas V to be directed in flight and are guided by four hydraulic actuators.

According to statements made by former ULA head Michael Gass, the inclusion of the RD-180 was prompted by the U.S. government. General Dynamics Space Systems Division, which was later acquired by Lockheed Martin, one of the two companies that formed ULA (the other being Boeing), entered into the agreement to obtain the RD-180 in the early 90s. Initially, Pratt & Whitney Rocketdyne was supposed to produce the engines domestically. However, this has yet to take place and all of the RD-180s used so far were produced in Russia.

The RD-180’s dual-thrust chamber provides 860,000 lbs (3.83 MN) of thrust at sea level and 933,000 lbs (4.15 MN) of thrust in a vacuum, which is significantly more than that provided by comparable engines developed in the United States. However, this American-Russian joint venture on the Atlas has become the focal point for some controversies within the past year – forcing both ULA and the US government to ramp up efforts to develop a domestically-produced engine.

On April 28, 2014, SpaceX filed a lawsuit against a contract between the ULA and the Air Force’s Evolved Expendable Launch Vehicle (EELV ) program that allowed ULA to be the sole-source of launch vehicles for national security. This lawsuit noted SpaceX’s efforts to compete, and highlighted a problem with Russian imports. The five-year sole-source contract between the Air Force and ULA prevented other companies from competing – the ability to compete being a pivotal component of American business. This lawsuit did not discontinue the contract between ULA and the Air Force. However, the suit brought up the fact that the engine used for the Atlas V vehicle depends on Russia, which is currently being sanctioned by the United States for recent military actions carried out by the former US Cold War rival.

SpaceX stated the following, “Given international events, this seems like the wrong time to send hundreds of millions of dollars to the Kremlin – especially considering there are domestic alternatives available and qualified to compete.” As a Russian engineering company is the sole developer of the RD-180, this created a situation where ULA is dependent on Russia for this engine. The dependability of outsourcing from NPO Energomash has changed since the United States began Russian sanctions due to Russia’s annexation of the Crimea.

ULA currently has 16 RD-180 engines within the United States, and the company believes the engines will run out by 2016 if Russia is forced to discontinue these exports to the United States. As a result of this issue, the courts blocked all payments from the government and ULA to Energomash until May 6 when the United States Departments of Treasury, Commerce, and States concluded that the sanctions towards Russia did not apply to RD-180 purchases.

This, however, did not settle issues originating at the RD-180’s point of origin. Russian Deputy Prime Minister Dmitry Rogozin stated that Russia would cease the export of Russian-made rocket engines for use on U.S. Department of Defense missions in May of last year.

Even though Russia continues to ship RD-180 engines to the United States, replacing the rocket engine has taken on greater urgency with new engines being proposed – and developed. ULA is working with Blue Origin to develop the BE-4 engine, which could replace the RD-180 in the Atlas V. Similarly, a replacement for both the Atlas V and Delta IV family of launch vehicles is being developed, the Next Generation Launch System or “NGLS” – which ULA hopes to have in service by 2019.

The legacy of Russian-built rocket engines on US launch vehicles will likely not end at that time as Orbital Sciences Corporation has tapped the RD-181 for use on the company’s Antares rocket.

Nice article. Also enjoyed the pictures in it.