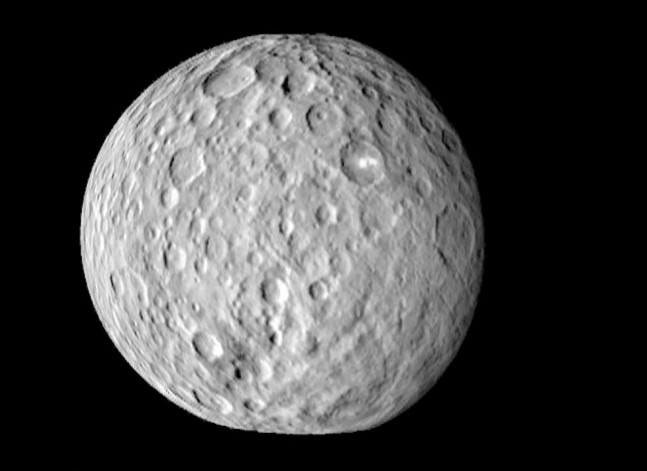 On Friday, March 6, 2015, NASA’s Dawn spacecraft will make history as it becomes the first spacecraft to orbit two bodies in the main asteroid belt. Prior to orbital insertion, planned for 4:20 a.m. PST (7:20 a.m. EST), Dawn has beamed back several new images of the dwarf planet Ceres. Dawn will be the first mission to successfully visit a dwarf planet when it enters orbit around Ceres later this week.

“Dawn is about to make history,” said Robert Mase, project manager for the Dawn mission at NASA’s Jet Propulsion Laboratory (JPL) in Pasadena, California. “Our team is ready and eager to find out what Ceres has in store for us.”

The newly received images show a heavily cratered surface with unusual and puzzling bright spots.  Ceres was the first objected detected in the main asteroid belt, and scientists hope Dawn will tell how Ceres formed and what, if any, surface changes are taking place. As the spacecraft orbits closer and closer to the surface, scientists will be scouring the data for any signs of active geological processes.

“Studying Ceres allows us to do historical research in space, opening a window into the earliest chapter in the history of our Solar System,” said Jim Green, director of NASA’s Planetary Science Division at the agency’s Headquarters in Washington. “Data returned from Dawn could contribute significant breakthroughs in our understanding of how the Solar System formed.”

Dawn entered into its final approach phase toward Ceres this past Dec., and has provided us with images showing the entire dwarf planet during a full nine hour rotation. Starting on Jan.25, the images produced by Dawn have been the the highest resolution ever captured — even better than Hubble (BTH).

In 1801, Ceres was first detected by Sicilian astronomer Father Giuseppe Piazzi. Initially labeled as a planet, Ceres was subsequently re-classified as an asteroid. Due to its spherical shape and planet-like qualities, Ceres was determined to be a dwarf planet in 2006, along with Pluto and Eris. The Dawn mission is not your usual NASA acronym, but in fact named for the mission’s purpose — to discover the secrets of the dawn of our Solar System. Launched almost eight years ago, in Sept. 2007, Dawn first explored the giant asteroid Vesta from 2011 to 2012. During those 14 months, the probe captured unprecedented images and data. Vesta and Ceres both orbit the Sun in the main asteroid belt, between Mars and Jupiter.

“Both Vesta and Ceres were on their way to becoming planets, but their development was interrupted by the gravity of Jupiter,” said Carol Raymond, deputy project scientist at JPL. “These two bodies are like fossils from the dawn of the Solar System, and they shed light on its origins.” Ceres and Vesta are key to understanding the origin and evolution of the Solar System, but for different reasons. Ceres is the most massive body in the asteroid belt, with an average diameter of 590 miles (950 kilometers), while Vesta has an average diameter of 326 miles (525 kilometers), and is the second most massive body in the belt. Ceres and Vesta are very different geologically speaking. Vesta, a very dry body, formed before Ceres did. As opposed to Vesta’s extremely dry nature, Ceres, is estimated to be 25 percent water by mass and could harbor a subsurface ocean.

“By studying Vesta and Ceres, we will gain a better understanding of the formation of our Solar System, especially the terrestrial planets and most importantly the Earth,” said Raymond. “These bodies are samples of the building blocks that have formed Venus, Earth and Mars. Vesta-like bodies are believed to have contributed heavily to the core of our planet, and Ceres-like bodies may have provided our water.”

“We would not be able to orbit and explore these two worlds without ion propulsion,” Mase said. “Dawn capitalizes on this innovative technology to deliver big science on a small budget.” Dawn is scheduled for orbital insertion around Ceres at 4:20 a.m. PST on march 6, 2015. Image Credit: NASA/JPL-Caltech

Later this year, another NASA probe is set to flyby a dwarf planet much further out into the Solar System. What makes Ceres and Pluto so different, is Ceres is thought to have formed where it is today. Whereas Pluto is believed to be a Kuiper belt object that was captured or pulled into the orbit it has now. The New Horizons probe is scheduled to flyby Pluto on July 14, 2015.