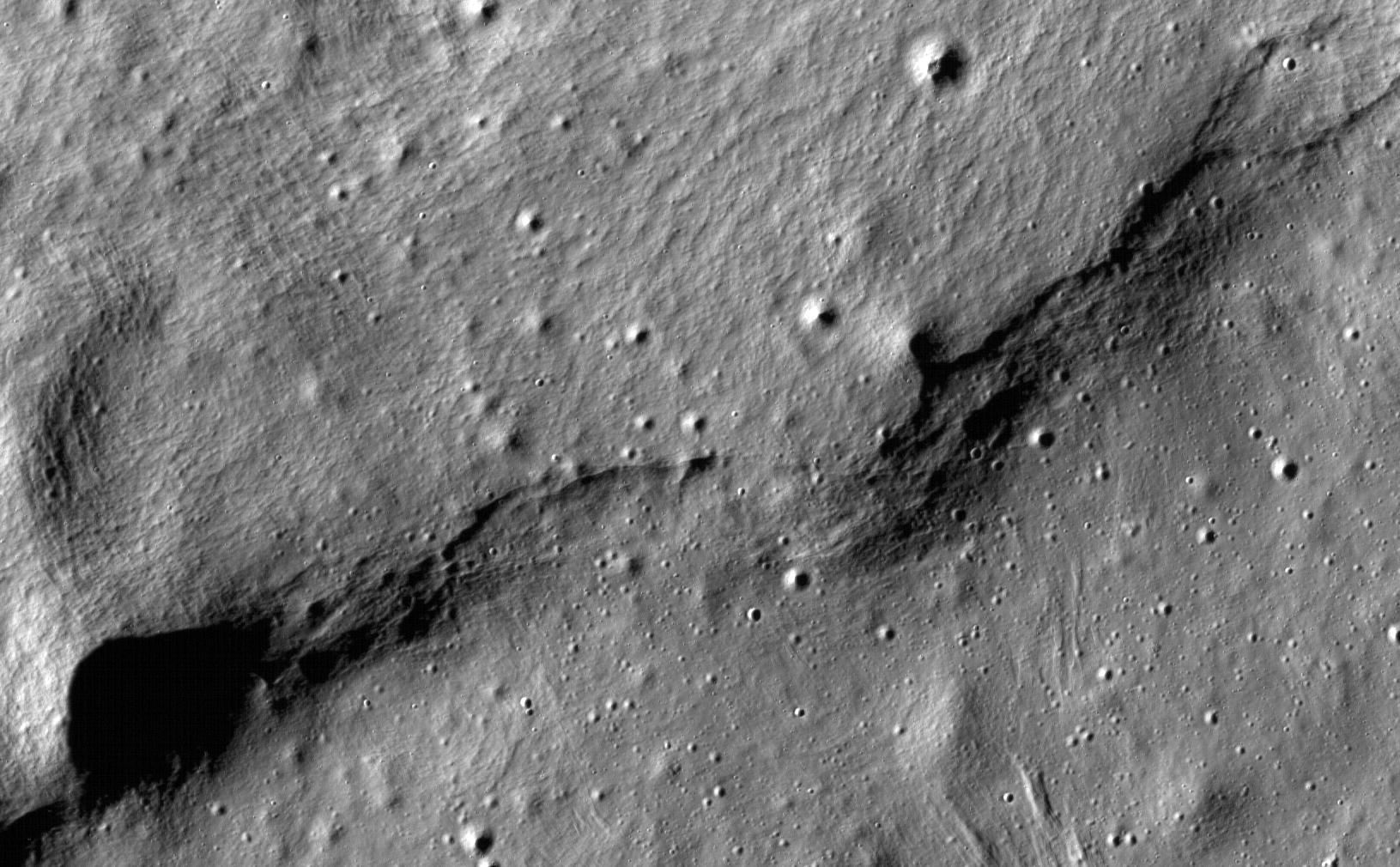 This image of lobate scarps, which is a kind of curved hill, was taken near a region of the Moon called Mare Frigoris by NASA’s Lunar Reconnaissance Orbiter. It and other areas may show current tectonic activity on the Moon. Photo Credit: NASA

New images captured by NASA’s Lunar Reconnaissance Orbiter (LRO) reveal recent tectonic activity on the Moon in the form of “wrinkled” or curved hills and shallow trenches produced by cracking and shifting in large lunar basins known as mare as recently as 40 million years ago.

More than 12,000 images LRO’s camera took of Mare Frigoris, a region near the Moon’s north pole, show these wrinkled ridges, which have never before been seen on the lunar surface. While the Moon does not have tectonic plates like the Earth does, the slow loss of internal heat from its violent formation more than four billion years ago is shrinking its interior, causing these unique “wrinkled” surface features, which have been seen near small, young craters.

This finding, published in the journal Icarus, is a surprise to scientists, who had long thought the contraction of lunar basins ended approximately 1.2 billion years ago.

Seismic activity on the Moon has been measured since the Apollo missions, when astronauts placed seismometers on the lunar surface. Between 1969 and 1977, the seismometers recorded thousands of moonquakes, most of which occurred deep in the Moon’s interior.

Shallow moonquakes, as opposed to the mostly deep ones previously studied, may be associated with young lunar surface features, such as the ones with the wrinkled ridges recently observed, according to a study published in the journal Nature Geoscience.

“The Moon is still shaking and quaking from its own internal processes,” said Nathan Williams of NASA’s Jet Propulsion Laboratory in California, and lead author of the Icarus paper. “It’s been losing heat over billions of years, shrinking and becoming denser.” 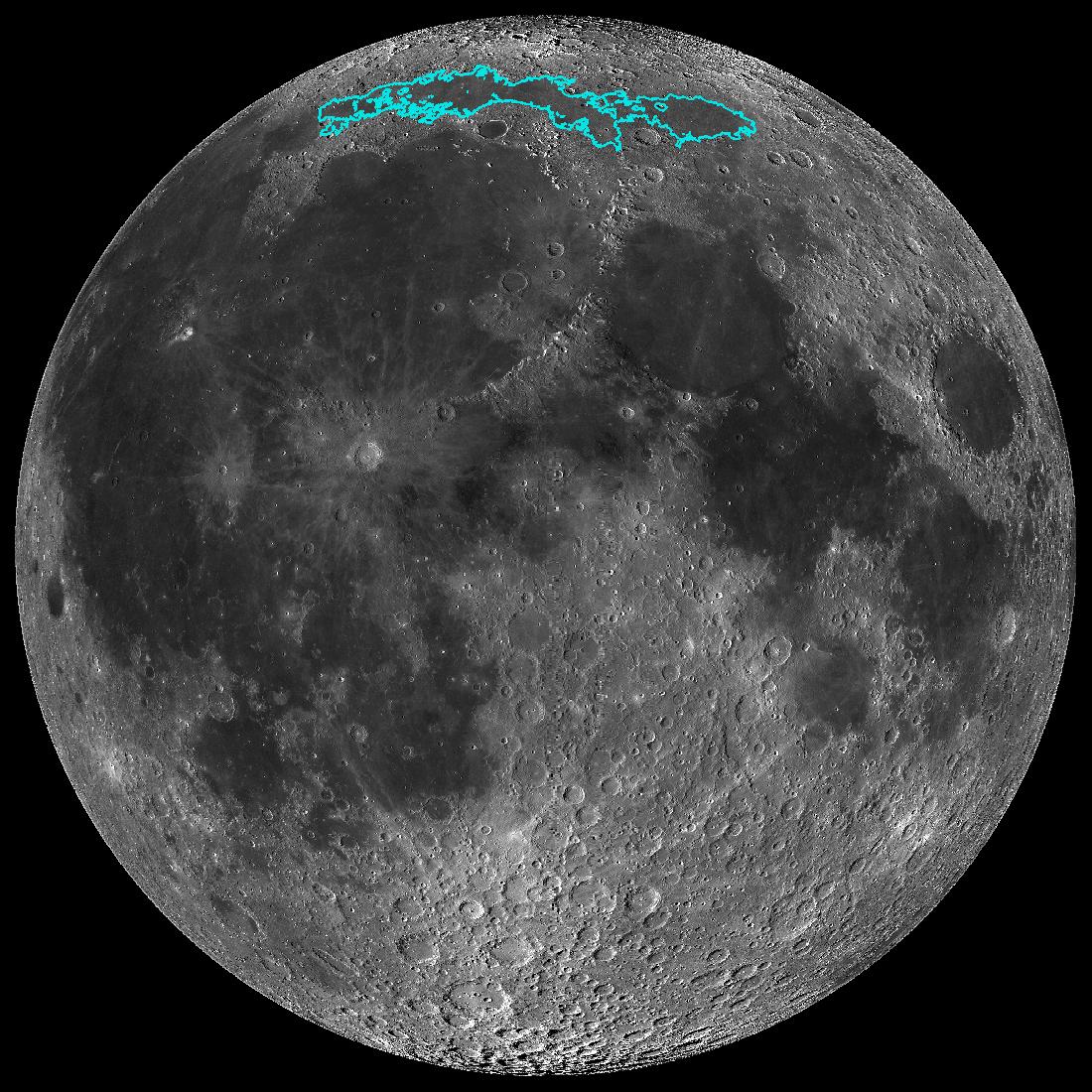 A brief history of Moon exploration and discovery

In the nearly 50 years since the first Moon landing, the former Soviet Union, now Russia, the United States, China, the European Space Agency (ESA), Japan, India, China, and Israel have sent robotic spacecraft to study Earth’s nearest planetary neighbor. Research has frequently centered on tectonic activity and on the search for water on the Moon.

Five of NASA’s seven unmanned lunar Surveyor missions successfully soft landed on the Moon between 1966 and 1968. They obtained data on possible Apollo landing sites, took photographs, and studied the texture of lunar regolith.

The former Soviet Union’s Luna 24, an unmanned mission, returned the last lunar sample back to Earth for analysis. No lunar missions were conducted in the 1980s.

During the 1990s, NASA sent two small spacecraft, Clementine and Lunar Prospector, to map the color and shape of the Moon from lunar orbit. Clementine studied a large impact basin on the Moon’s south pole and provided the first suggestion that dark areas in this region might contain frozen water delivered by cometary impacts. Lunar Prospector mapped surface magnetic fields and discovered high levels of hydrogen at both the north and south poles, strengthening the case for frozen water in these areas.

China launched its first mission to the Moon, Chang’e, in 2007. The spacecraft entered a polar orbit from which it took the highest resolution photos of the lunar surface to date, by bouncing microwave signals off the surface. The $180 million (1.4 billion yuan) project searched for Helium-3, an element that could potentially power nuclear reactors, studied the Moon’s composition and depth, and mapped lunar features before being intentionally crashed into the Moon at mission’s end.

Chang’e 2 followed one year later, to scout locations for a landing site. It also produced more detailed maps of the Moon’s surface. In December 2013, Chang’e 3 successfully landed in Mare Imbrium, a volcanic plain. Its six-wheeled Yutu rover rolled out of the spacecraft and captured stunning views of the region. The rover survived lunar night, and even though technical problems stopped its movement after two weeks, it continued to return data for two-and-a-half years.

On January 2, 2019, Chang’e 4 made history by becoming the first ever mission to successfully land on the Moon’s far side. It is currently exploring the Aitken Basin near the south pole. Chang’e 4 included a Yutu 2 rover and carried yeast, cotton seeds, and fruit fly eggs as part of an experiment to grow living organisms on the Moon. While the cotton seeds germinated, all the living organisms died because the spacecraft, in an attempt to conserve power, failed to keep them warm when lunar night began. 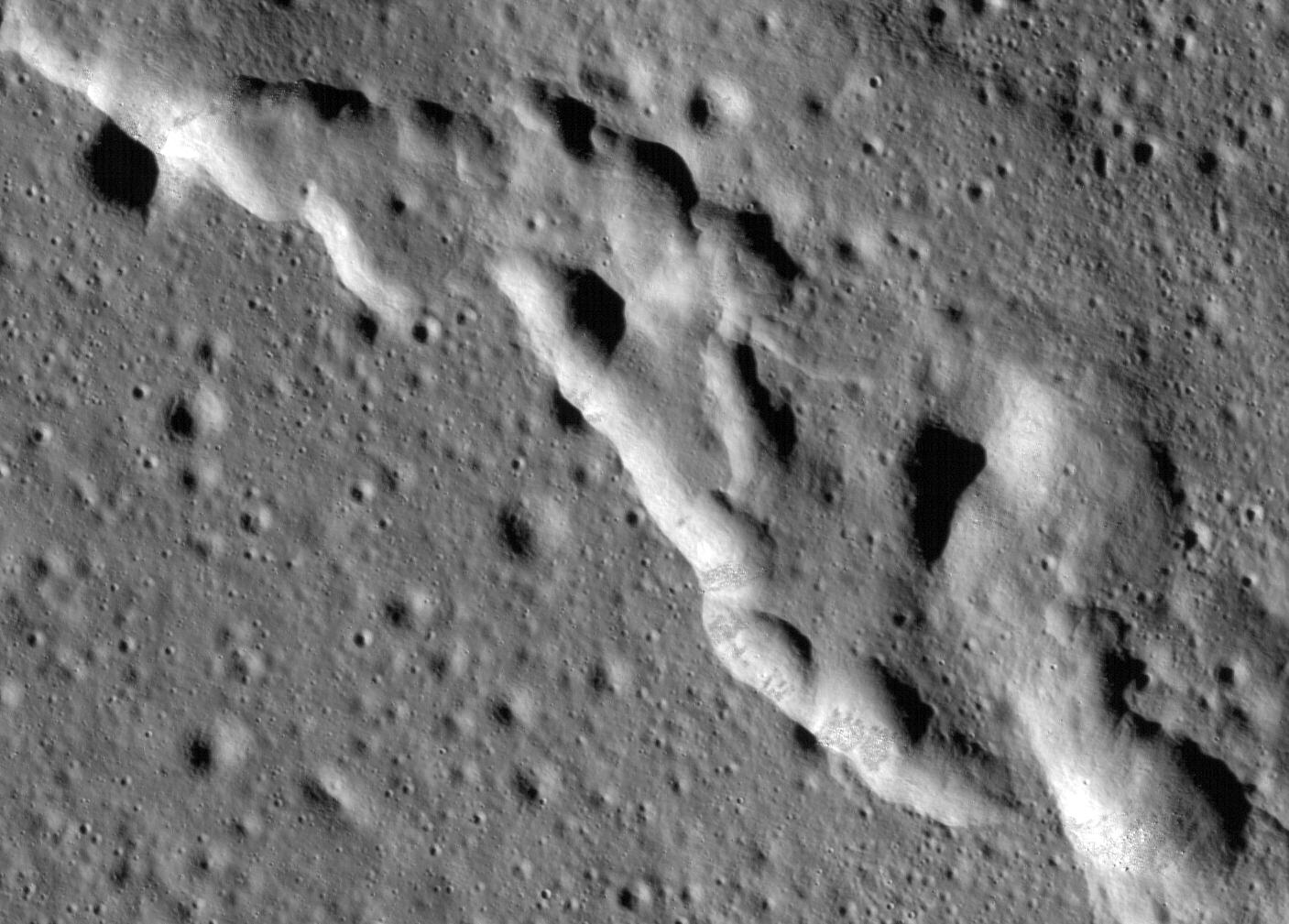 A closeup of the Mare Frigoris Ridges. Photo Credit: NASA

India launched Chandrayaan-1, its first lunar probe, in 2008. The mission featured an orbiter, which carried high resolution remote sensing equipment for visible, near-infrared, and both soft and hard X-ray observation. Its goal was producing a complete map of the Moon’s chemical composition, with specific focus on the polar regions due to the possibility of water ice being present there. Carrying six payloads for several space agencies. Chandrayaan found evidence of water molecules on the Moon’s surface. A lander sent with the probe was intentionally crashed into the surface to stir up debris as part of the search for water molecules.

LCROSS, launched together with LRO, followed up on the detection of hydrogen at the Moon’s poles. It included a projectile that deliberately impacted a crater to kick up debris and a spacecraft that flew through the debris plume to identify its composition. The projectile hit Cabeus Crater at the Moon’s south pole, a region in permanent darkness, in October 2009. Data from the mission confirmed the hydrogen at the south pole is part of water ice crystals and also noted the presence of light metals, such as mercury, sodium, and silver, in this mysterious region.

Most significantly, LCROSS finally settled the question of there being water on the Moon, indicating there could be as much as several hundred million tons of water, which could be used for future missions’ fuel and supplies.

Two small spacecraft comprised NASA’s Gravity Recovery and Interior Laboratory (GRAIL) mission, launched in 2011 with the goal of mapping variations in the Moon’s gravitational field to determine changes in the density of its crust and mantle. They revealed features never before seen, including tectonic structures, basin rings, volcanic land forms, central peaks within craters, and simple bowl-shaped craters. Additionally, they showed the Moon’s gravity field to be unlike that of any other rocky planet in our solar system. Both were intentionally crashed on the Moon’s near side in December 2012.

The Lunar Atmosphere and Dust Environment Explorer (LADEE) orbited the Moon’s equator for seven months in 2013-2014. It studied the density and composition of the lunar exosphere and the dust environment around the Moon and demonstrated two-way laser communication from lunar orbit before being intentionally crashed into the lunar surface. 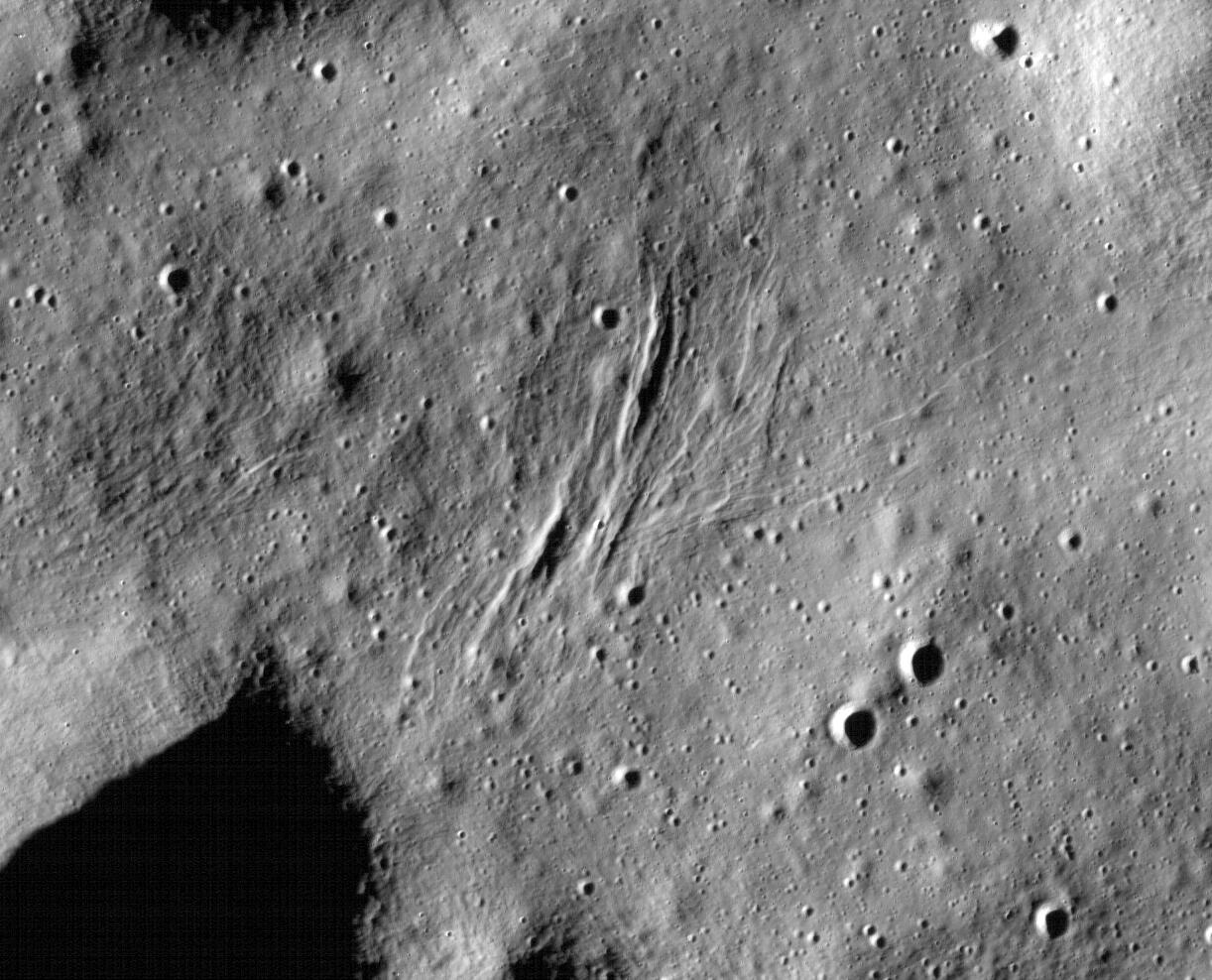