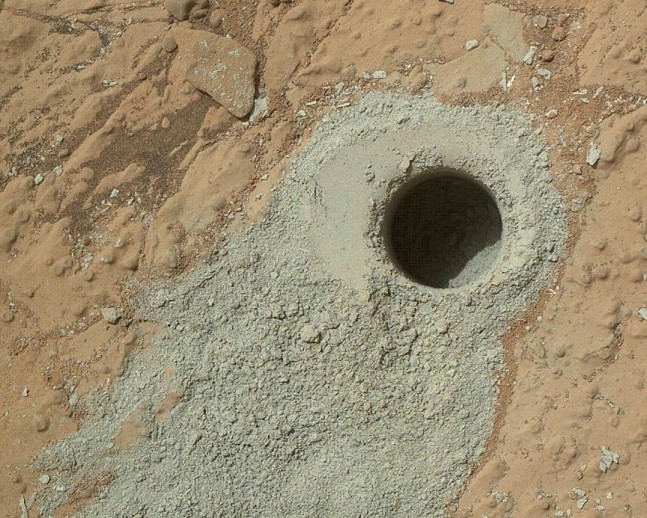 NASA's Mars rover Curiosity drilled into this rock target, "Cumberland," during the 279th Martian day, or sol, of the rover's work on Mars (May 19, 2013) and collected a powdered sample of material from the rock's interior. Image Credit: NASA/JPL-Caltech

This week is the annual fall meeting of the American Geophysical Union, a week of Earth and planetary science presentations where scientists, students, and media gather to hear the latest discoveries and developments. During a panel held Tuesday, Dec. 16, NASA revealed that its Mars Science Laboratory Curiosity rover has detected a hint of methane twice over a 20-month period. The findings, published in the journal Science, were discovered during two daytime sampling periods in late 2013 and early 2014.

Scientists are unsure of the source that is producing the methane spikes, and have not yet determined if the methane originated on Mars or arrived at the Red Planet via meteorites. Although organics such as methane can be present without the existence of life, this is the strongest evidence yet that Mars once supported life – or might be doing so at present.

“We have full confidence that there is methane in the atmosphere of Mars,” announced John Grotzinger of CalTech, a Curiosity project scientist. “Life is one of the few hypotheses for the formation of methane on Mars”. This graphic shows tenfold spiking in the abundance of methane in the Martian atmosphere surrounding NASA’s Curiosity Mars rover, as detected by a series of measurements made with the Tunable Laser Spectrometer (TLS) instrument in the rover’s Sample Analysis at Mars (SAM) laboratory suite. Image Credit: NASA/JPL-Caltech

Curiosity landed on Mars two years ago in August of 2012 and since its arrival, the rolling laboratory has been busy driving to Mount Sharp, an intriguing mountain located with ancient Gale Crater. Along the path to this destination, Curiosity has collected samples at a few locations.

The data received from Curiosity tells a lot about Mars’ history and what the planet could have been like in the past. The methane detection is the first in situ (on site) detection of organics on the Martian surface. The data shows background levels of methane in the Martian atmosphere as well as some episodic spikes that measure seven parts per billion, roughly ten times that of the background concentration.

The results were described as “An unexpected episodic increase in the Mars methane” by members of the project. Sushil Atreva, of the University of Michigan said: “A sudden spike and just as suddenly a disappearance of methane tells us that the Mars surface is communicating with the atmosphere.”

Atreya went on to say, “This temporary increase in methane — sharply up and then back down — tells us there must be some relatively localized source. There are many possible sources, biological or non-biological, such as interaction of water and rock.”

Why is this important?

“We will keep working on the puzzles these findings present,” said John Grotzinger, a Curiosity project scientist from Caltech. “Can we learn more about the active chemistry causing such fluctuations in the amount of methane in the atmosphere? Can we choose rock targets where identifiable organics have been preserved?”

When Curiosity detected such a large spike in methane, one of the first things scientists did was work to determine if the methane was Martian in origin, or if it was produced as an unexpected side product by Curiosity’s Sample Analysis at Mars (SAM) suite of instruments. Extensive testing and analysis showed the methane was indeed Martian in origin. The amounts produced in the lab were no where near the amounts seen by Curiosity. Whatever organic chemicals may be produced on Mars or delivered to Mars face several possible modes of being transformed or destroyed. Image Credit: NASA/JPL-Caltech

Identifying and detecting organics on Mars is complicated as the Martian rock and soil samples contain perchlorate. When the perchlorate is heated inside SAM, it reacts with the organics, ultimately changing the structure of the compounds. This process makes it virtually impossible for us to accurately identify which organic compounds we are seeing.  An important distinction to make.

Roger Summons, a team member from the Massachusetts Institute of Technology (MIT), noted: “Organics are important because they can tell us about the chemical pathways by which they were formed and preserved. In turn, this is informative about Earth-Mars differences and whether or not particular environments represented by Gale Crater sedimentary rocks were more or less favorable for accumulation of organic materials. The challenge now is to find other rocks on Mount Sharp that might have different and more extensive inventories of organic compounds.”

Although the origin of the methane is currently unknown, there are three likely culprits. First, the alteration of surface organics: meaning organics formed by ancient life on Mars, that have been subsequently broken down by ultraviolet rays from Sun.

Another possibility is the reaction of minerals, such as olivine, in Mars’ subsurface with water that created methane — a geological process known as serpentinisation. Or the methane could have arrived via a delivery service, like cosmic dust or micrometeorites.

Regardless of how it was produced, the methane appears to have been stored in gas-like crystals in the Martian subsurface, known as clathrate hydrates. From time to time, the methane within the clathrates is disrupted and allowed to escape into the atmosphere. Based on the data received from Curiosity, the science team believes the source of the methane is close to Gale Crater.

“The stability of the clathrates depends on where are they are in the surface. Small impacts or thermal stresses may have destabilized the clathrates, which may represent ancient methane. They can be stored for billions of years,” said Syshil Atreya, from the University of Michigan. NASA’s Curiosity Mars rover has detected fluctuations in methane concentration in the atmosphere, implying methane is both added to and removed from the Martian atmosphere. Image Credit: NASA/JPL-Caltech/SAM-GSFC/Univ. of Michigan

There is water on Mars, but not like what is seen here on Earth. The water in, and around Gale Crater appears to have been locked inside lakebed minerals some three billion years ago, with Curiosity getting its first “taste” of Martian water after drilling a sample of the Cumberland rock.

With the help of SAM, scientists extracted and analyzed hydrogen isotopes within water molecules imprisoned in the rock. They determined the ratio of deuterium (a heavier hydrogen isotope with an added neutron) to “normal” hydrogen isotopes, providing a signature to compare across various stages of the planet’s development.

The ratio of deuterium to hydrogen varies across time because the lighter traditional hydrogen isotopes can escape into the upper atmosphere more easily than the deuterium. To get a clear picture of how Mar’s water changes over time, scientists need to observe the current ratio of isotopes and compare that to the ratios discovered in rocks throughout the planet’s development.

“It’s really interesting that our measurements from Curiosity of gases extracted from ancient rocks can tell us about loss of water from Mars,” remarked Paul Mahaffy, SAM’s principal investigator from NASA’s Goddard Space Flight Center.

Curiosity drilled into a mudstone sample, known as Cumberland, and determined the deuterium to hydrogen ratio in that sample is one-half the ratio detected in water vapor currently in the Martian atmosphere. This indicates that Mars has lost a significant amount of water since the formation of the Cumberland rock. However, the Cumberland sample’s ratio is three time higher than the ratio in Mars’ original water supply, illustrating that the majority of water loss occurred before the Cumberland rock was formed. Graphic showing comparison between the amount of the organic chemical chlorobenzene detected in the “Cumberland” rock sample and amounts of the same compound in samples from three other Martian surface targets. Image Credit: NASA/JPL-Caltech

Curiosity’s science team is not sure when the next spike in methane will appear, but they will be monitoring the Martian surface closely in order to determine the source. Grotzinger stated that over the coming months Curiosity will drill more samples in an effort to try to identify the methane source trapped in the sediments.

The team hypothesizes that the methane may originate from organic compounds built up over time in the Martian sediment, possibly even from billions of years ago, early on in Mars’ history.

While the detection of organics is not the definitive proof of life we are searching for, it is the best evidence so far in favor of the possibility of life sometime in Martian history.

Grotzinger concluded the press conference by saying, “Curiosity is turning the corner from a Star Trek exploration mode — to boldy go where no one has gone before — to a more deductive exploration mode.”

Curiosity is one element of NASA’s ongoing Mars research and preparation for a human mission to Mars in the 2030s. Caltech manages the Jet Propulsion Laboratory in Pasadena, California, and JPL manages Curiosity rover science investigations for NASA’s Science Mission Directorate in Washington.

Excellent article Amy! This is a very exciting discovery and certainly calls for further research and exploration.

Preaching to the choir but a Science team with a lab sent their would certainly be a nice added function for exploring this.

This detection of organic compounds in Martian surface deposits is welcoming news. Combined with the announcement of the detection of methane in the atmosphere, there is at least a tiny glimmer of hope for those that support the idea that Mars has extant lifeforms hidden in some habitable niche somewhere on the planet. But as the last several decades have taught us, the detection of life on other worlds is proving to be more difficult than had been originally assumed.

What a remarkable discovery!