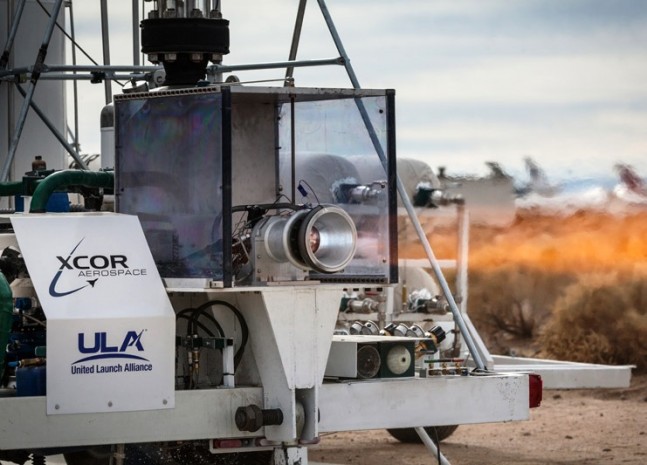 Private space firm XCOR Aerospace has recently announced that it has finished the latest series of tests on a liquid hydrogen rocket engine that the company is producing for Colorado-based United Launch Alliance (ULA ). XCOR has stated that this is an important milestone toward running the LH2 (liquid oxygen and liquid hydrogen) engine in a fully closed cycle mode. With issues revolving around the use of Russian-made rocket engines – it could serve to ease U.S. reliance on foreign-built propulsion systems.

“This test marks the first time liquid hydrogen and liquid oxygen have been supplied to a rocket engine with a piston pump,” said XCOR Chief Executive Officer Jeff Greason in a company-issued news release. “It is also the first time an American LH2 engine of this size has successfully fired liquid hydrogen and liquid oxygen together in pump-fed mode. We are happy to be making solid progress on the engines. This will also bring us to a new phase in our plans for orbital flight.” XCOR’s most recent demonstration of their capabilities was a hot-fire test of the XR-5H25 rocket engine.

According to XCOR, the company successfully completed the test of the XR-5H25’s regeneratively cooled thrust chamber. During this test, both liquid oxygen and liquid hydrogen propellants were supplied in pump-fed mode to the engine.

The company has announced its intention to conduct future tests which will see the nozzle, the engine and piston pumps fully integrated. The firm hopes that closed cycle testing will follow soon afterward and will complete the sub-scale demonstration engine program.

“ULA has an ongoing effort to develop rocket engines for our next generation upper stage, and we are thrilled to see that progress continuing with XCOR,” added ULA Vice President George Sowers.

ULA has a contract with XCOR to develop the engines for a new launch vehicle’s upper stage. Currently, ULA fields the Delta II and IV as well as the Atlas V family of rockets.

XCOR Aerospace maintains a Research and Development Center in Midland, Texas, as well as an operational and manufacturing site at the Kennedy Space Center in Florida. At present, the company is working to produce various rocket-powered vehicles, propulsion systems, advanced non-flammable composites and an array of other aerospace systems.

With Russian officials announcing plans to pull out of the International Space Station program as early as 2020, tensions between the two nations seems to be escalating. In March of this year, Russian Prime Minister Dmitri Rogozin stated that the RD-180 would no longer be exported for use on U.S. defense missions, that GPS stations located in Russian territory and other restrictions would be enforced. More recently, Russia has stated that it will field its own space station – by 2017.

XCOR is perhaps most notable for its “Lynx” sub-orbital spacecraft. The twin seat, reusable, space plane uses liquid rocket fuel and is actually a family of potential spacecraft which include the Lynx, Lynx Mark II and Lynx Mark III. The Mark II is designed for either private spaceflight at a distance of about 100 kilometers. The Mark III, while also designed for private missions to sub-orbit is also planned as being capable of conducting scientific research missions as well as be a platform from which to deliver micro satellites aloft.