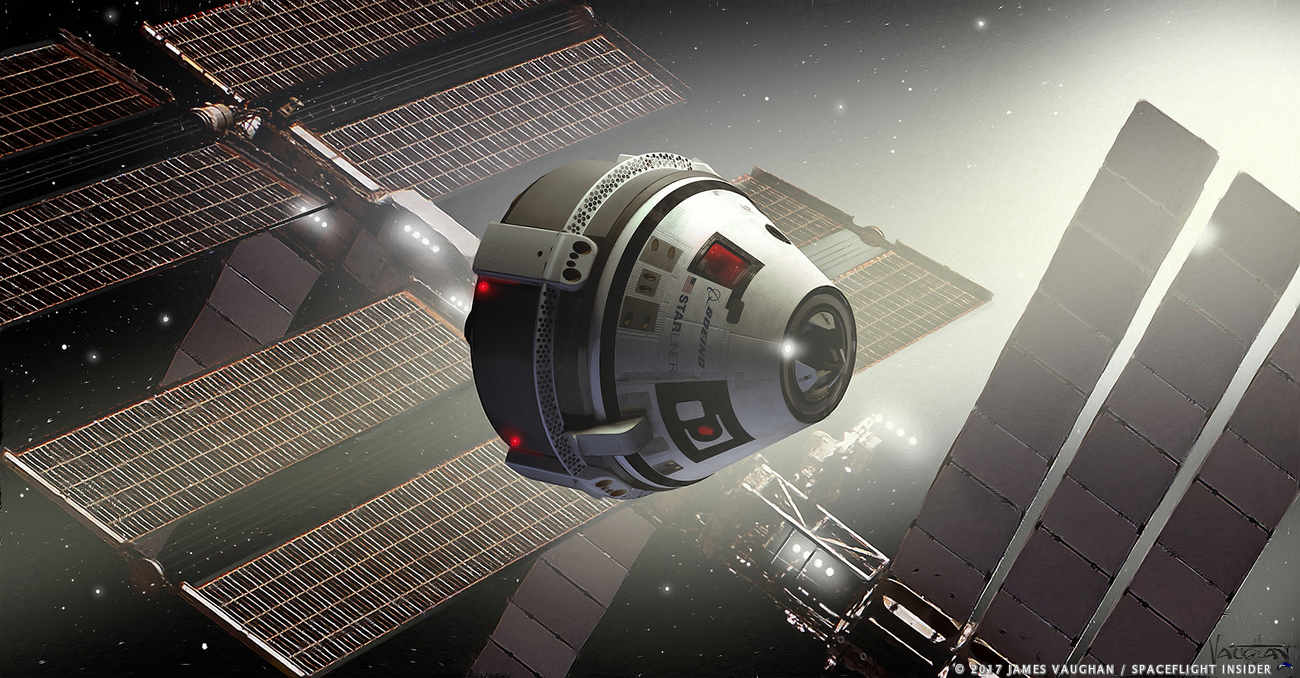 KENNEDY SPACE CENTER, Fla. — In a video promoting Boeing’s Starliner spacecraft the words “Your Ride Is Here” are prominently-placed. The statement suggests Starliner is prepped and ready to send crews to the International Space Station. How close is the company in terms of making reality match its words?

NASA has been working to hand over responsibility of the design and production of spacecraft (for both its crewed and autonomous missions) – over to private companies. Recent events provide an opportunity to review some of the progress made under the agency’s Commercial Crew Program (CCP) which had its office established in 2005 under President George W. Bush.

According to the space agency:

“Part of the Exploration Systems Mission Directorate, the office is located at NASA’s Johnson Space Center, Houston…The office will manage orbital transportation capability demonstration projects that may lead to the procurement of commercial cargo and crew transportation services to resupply the space station.”

As noted, NASA has been investing a great deal in the emerging private space industry to help it grow in the U.S. market. From ferrying cargo and crew to the space station to developing robotic lunar landers the agency’s former philosophy of “owning” the spacecraft they pay for has transformed into one where it assists companies in developing these vehicles.

In terms of sending astronauts to and from the International Space Station, the two firms now working to achieve this goal are Boeing and SpaceX. The space agency announced substantial financial awards as the companies move through the program’s various phases. SpaceX has made steady progress with the launch, reentry and recovery during the Demo Flight 1 mission (March 2 – March 8).

For SpaceX, Demo Flight-1 was one of the most crucial milestones it had to complete under CCP’s mandate. Boeing has yet to complete several of these objectives and is starting to lag behind SpaceX.

Both companies are required to demonstrate that their vehicles adhere to the stringent rules that guide crew-rating any spacecraft the agency uses to launch astronauts. Boeing’s CST-100 “Starliner”capsule has encountered some troubling technical issues. Critical abort engines, provided by Aerojet Rocketdyne, leaked highly-toxic hydrazine fuel back in June of 2018, according to an Ars Technica report.

Boeing has yet to conduct a pad-abort-test (the current timeline places that test taking place in 2019), something that must be done prior to an crewed demonstration flight. SpaceX completed this milestone four years ago in 2015.

Some NASA officials initially deemed Starliner to be the Commercial Crew Program’s front-runner. Given that the company that is producing the spacecraft was founded in 1916 and has been involved with the United States’ space efforts since the opening days of the Space Age – it seemed a safe bet.

The “flawless” March 2, 2019 launch of a Block 5 Falcon 9 rocket and its payload of the automated Demo Flight-1 Crew Dragon spacecraft appears to suggest otherwise. Moreover, it was carried out by a company formed in 2002. An age gap isn’t the only thing that separates Boeing from SpaceX.

There are several differences between what the two companies are using to complete NASA’s CCP requirements:

Ordinarily, NASA requests proposals for projects and competing companies then bid on those contracts. Other established companies were considered but not approved to move forward through the different levels of the Commercial Crew Program.

In 2014 Boeing received some $4.2 billion to provide transportation services to the International Space Station. SpaceX, received an estimated $2.6 billion.

Boeing is part of the aging NASA mindset, which is obsolete. If Boeing is going to survive it needs to start working like Space X. The Starliner is big and overly complex. It is also an outdated design, as is the booster that will launch it.Space X’s design looks to be 20 to 30 years ahead of Boeing. That should not have been the case!

Wow. Boeing got 2 billion more than SpaceX and they haven’t even completed a pad abort test? Not to mention SLS (which Boeing manages) is overdue, over budget and by the time it (ever) gets made will be obsolete. I sense a black program at work…

WHAT IS BOEING REALLY BUILDING?!?

“WHAT IS BOEING REALLY BUILDING?!?”

Nothing. They’re building nothing. Their bigwigs are pocketing everything and getting fat while their customers and the taxpayers are paying the price. It’s not just space…look at the 737MAX debacle. Look at the problems with the KC-46 program (delivered with TRASH inside to the US MILITARY). This is a bloated dinosaur of a company with no competition and no consequence, propped up by rich execs and powerful legislators. It’s an awful shame what’s become of the once proud name Boeing, and a betrayal of taxpayer dollars to not award the contracts to companies that actually deserve it (ie Sierra Nevada).

Justing from the interior shots of their crew vehicle if they are building black ops it’s gonna have dials and switches and wires hanging everywhere. Hey Boeing, the seventies called, they want their space vehicle back!

IMO Sierra Nevada should be the one instead of Boeing. Completely different approach with a lifting body. So you got a capsule with spaceX and a lifting body with Sierra nevada… suddenly you got different applications from american soil. By the way Boeing is a weist of money and time.

Boeing has had it’s day and it’s time for these mega-companies with so much political baggage to stick with their military hooks and leave getting to the moon and beyond to commercial enterprises that are not beholding to government influence and the self interests of congressman. NASA as well needs to shed a great deal of their influence. There are people right now willing to risk their lives to further and accelerate humans getting into space without all the red tape. Only one reason Boeing received more money, they had to spread it out to so many open hands.

Boring can’t even keep the 737 max in the air and they want to go to mars?

If Boeing cannot get a “certified” Starliner this year I could see calls for an audit. But no one wants Boeing to fail, they do need to get off their fat A—S!

The ONLY reason Boeing gets contracts over SpaceX is because almost all officials in Boeing are former high ranking military officials who have strong ties to the DoD even after they retired.

I think this article has some inaccuracies. #1, Boeing is preparing for the uncrewed test flight for THIS MONTH, not August. #2, The abort test only has to be done before the CREWED mission, which is currently scheduled for August. They are now about 1 month behind SpaceX. Personally, I like certain functions to have the solid mechanical switches for emergencies. It would be a bitch for the touchscreen to go “out” during some sort of failure. Same for emergency gauges. I look forward to America having some redundancy in Manned Space launch. I want BOTH SpaceX and Boeing to be successful. We’ll be better off than ever. And even though the Space Shuttle wasn’t cheap, it had incredible capabilities. Everyone should read the free book about the Shuttle Missions to see the many things it could do. Also, the “Shuttle Decision” is a good book about the extensive research that went into the design. There were reasons behind everything. Many “Kerbal Space” type technical reasons behind the design. Read it to learn about the “Devil in the details”… Nothing is EVER as clearcut as simplistic minds would have you believe.

#1. – Per NASA: https://www.nasa.gov/content/commercial-crew-boeing-orbital-flight-test-uncrewed/ — NASA has stated the Uncrewed Test Flight will take place on Tuesday, April 30, 2019. Today is Tuesday March 19, 2019 – the uncrewed test flight will not be taking place this month as you claim. At the earliest, it will take place more than a month from now.

#2. – Per the article: “Boeing has yet to conduct a pad-abort-test (the current timeline places that test taking place in 2019), something that must be done prior to an uncrewed demonstration flight. SpaceX completed this milestone four years ago in 2015.” — You are correct. There was a typo (it should have read crewed). We have since corrected it and posted an update noting our mistake.

We apologize for the error and deeply appreciate eagle-eyed viewers correcting us. We were disappointed however that you chose to violate our Commenting Rules (“simplistic minds”). Our staff are volunteers. As they provide their services free of charge – we have a zero tolerance policy toward disrespectful comments. However, we did make an error and will not remove your commenting privileges. We would, however, appreciate an apology.

Eric Berger’s Twitter feed to @sciguyspace on March 15th says that his sources have told him that the Starliner’s first flight is being delayed to August.

Exactly, I think NASA I think government and we know that means more red tape which slows everything down. These new companies are driven to get space tourism/settlements moving. Let NASA keep doing what they been doing for years and years floating circles around the earth doing experiments , looking for ET and watching out for any threats to earth(comets,giant solar flares etc…).

I agree with the member who said that Siera Nevada should be considered with a totally different approach using a lifting body. The Dragon capsule is a design that harkens back to the 1960s. The Boeing Starliner is from the 1960s. Let’s have 2 different approaches to getting into Space. None of these designs, however, can make it to Mars. You need something much bigger and a more powerful spaceship to get to Mars and maybe a shuttle that can transport humans down to Mars and back up to the Mothership and safety. I see that design as 20-30 years away given our current rocket-fuel technology. Some other sort of “stellar” drive is required to go beyond Mars to the outer planets. Rocket fuel won’t cut it.

I believe that it was a missed opportunity to go with the Boeing CST-100 Starliner Apollo 2.0 instead of Sierra Nevada’s oddly named “Dream Catcher” HL-20/X-38/BOR-4 clone. The Boeing product will not do anything better than the Dragon 2 at a 60% higher cost, while the Dream Catcher will be able to reenter and land with a much lower G-loading than the other choices, and a completely reusable vehicle.

Spaces does not having Boeing’s lobbying dependencies. It must do good work instead of buying legislators.

News release yesterday, 3/20/2019, the Boeing Starliner crew launch is delayed until November 2019. This could slip too depending on how ugly the 737-8 Maxx drama gets and Boeing spends resources and time recovering it’s aerospace reputation. SpaceX might be the only crew manned vehicle come late April 2019, assuming that doesn’t hit any hurdles.

Gregg Givens – Not all of us “simplistic minds” can parse the “devil in the details” as you (think you) can. But we can read. This link says Starliner won’t launch till August. I might have a “simplistic mind” but I know that August is 5 months from now. You said the uncrewed flight was taking place this month (March). It sounds like you read a book, got all inspired and think you can talk down to people who’re a helluva lot better informed than you. https://www.reuters.com/article/us-space-boeing/boeing-delays-by-months-test-flights-for-u-s-human-space-program-sources-idUSKCN1R12QR?fbclid=IwAR1HV6Vxlb4ReFcB8EIHo7Dg3UGbOFIxsBJJ0bMQPuCgMP7vekpMFz5VLAA

Both SpaceX and Boeing had, in addition to pad abort tests, in-flight abort tests as milestones.
Orion also has an in-flight abort test on the timeline. Boeing was then allowed to DELETE the in-flight test. After Boeing’s issues with parachute design and leaking fuel, how can this skipping basic safety test be justified? Atlas V’s too expensive? Just re-use it. Ooops…