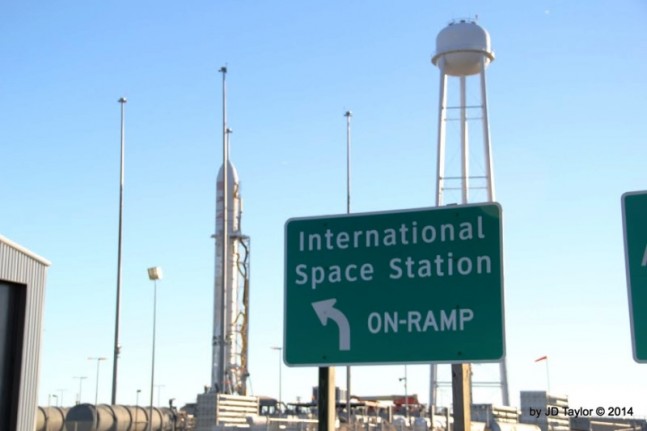 The accident should not impact operations on the ISS, as the station has enough supplies to last through March 2015. Photo Credit: JD Taylor / SpaceFlight Insider

The October explosion of the Orbital Science ORB-3 resupply mission rocket destined to the International Space Station caused an estimated $20 million in damage to the Mid-Atlantic Regional Spaceport’s (MARS) Pad 0A. It was not clear where the funding would come from to repair the damage. The state Virginia had stated that they did not have the budget to cover the expense.

Included in the 1.1 trillion Federal spending bill passed by the House last night (12/11/2014) was the $20 million to cover the pad damage. The Senate is to vote on the bill as early as Friday.   NASA’s overall budget will be increased by 2 percent to $18 billion next year, that is a $364 million increase over current levels.

Rep. Scott Rigell, R-2nd, also worked with the Mid-Atlantic Regional Spaceport and the House Appropriations Committee to secure funding in the bill to restore the launch pad, according to his press secretary, Kaylin Minton.

Democratic senators Mark Warner and Tim Kaine announced Thursday they would had sought the spending provision in an effort to help the Mid-Atlantic Regional Spaceport, known as MARS, “rebound” from that catastrophic launch failure. MARS is located at the NASA Wallops Flight Facility on the Eastern Shore.

“The announcement that the compromise spending Bill expected to be voted on and passed by Congress this week contains $20 million in Federal funding for repairs to the Mid-Atlantic Regional Spaceport is great news. It clearly indicates the importance of our Wallops Island launch facility to the future of commercial space launches.

I want to thank Senator Warner, Senator Kaine and Congressman Rigell for all of their hard work to include this funding in the compromise Bill.

This is especially good news in light of Orbital’s announcement earlier this week that while it must launch from Cape Canaveral until the Wallops Island launch facility is repaired, they fully intend to resume launches at Wallops with their new engine in 2016.

I will continue to work in the General Assembly to make Virginia a leader in commercial space launches.”

This article originally appear on USA in Space and can be viewed here: Pad 0A

Why are the taxpayers of the United States paying for this? It was an Orbital Sciences rocket that caused the damage. It seems to me that it is their responsibility to clean up the mess caused by their rocket.

Good call.
I like the cut of your jib.