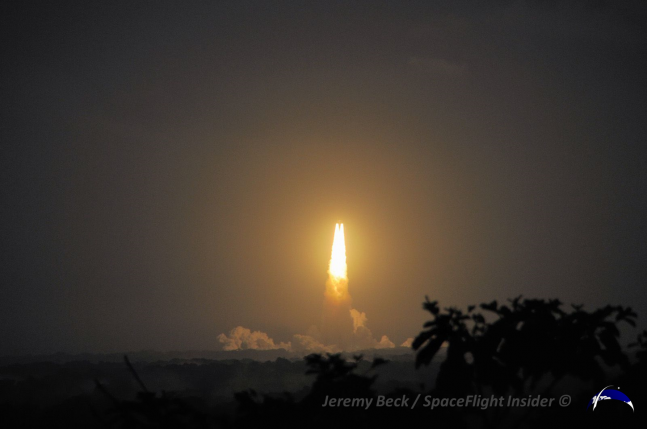 Carrying two communications satellites for the French and Italian agencies, an Ariane 5 ECA booster roared off of the launch pad at Kourou, French Guiana at 4:30:07 p.m. EST (2130:07 GMT). The launch was conducted by Arianespace and delivered not one – but two satellites to orbit. It marks the first flight of the year for the aerospace company. The launch was delayed by about an hour due to a rainstorm in the area. Despite troublesome weather, the Arianespace launch team was not to be denied.

The original time for today’s launch attempt had been set for 3:30 p.m. EST (2030 GMT). With the rain pouring down, the launch team entered a waiting game with the weather and were rewarded with conditions just favorable enough to allow them to launch. The launch team had a total of 2 hours and 5 minutes within the window to get the Ariane 5 launch vehicle and its precious cargo off of the pad. This was extended by an additional half-hour to provide the best opportunity possible to carry out the launch. A “headless” Ariane 5 ECA booster is rolled out to the pad at French Guiana in preparation for the ABS 2 / Athena-Fidus mission. Photo Credit: Jeremy Beck / SpaceFlight Insider

The Ariane 5 is built in Europe and then transported to French Guiana by sea. The booster and spacecraft are then mated at Kourou. The duo were rolled out from the Spaceport’s Final Assembly Building to the ELA-3 launch zone yesterday. The launch readiness review team cleared the rocket, payload, support systems as well as the downrange tracking stations for this flight on Feb. 5. The day’s launch events were all par the course for Arianespace.

At liftoff the Ariane 5 ECA’s two solid rocket boosters ignited, sending the rocket aloft and punching a hole through the clouds and rain circling above. About six seconds after liftoff, the rocket and its precious cargo conducted its first pitch rotation maneuver.

Within just a couple seconds of completing the pitch rotation maneuver, the Ariane 5 executed roll and pitch maneuvers which placed the rocket on the correct path for orbital insertion. At liftoff a majority of the thrust, some 92 percent, which is required to get the mission underway – is provided by the two strap-on boosters located on either side of the Ariane 5. The remainder is provided by the rocket’s core stage. During liftoff, the Ariane 5 inhales fuel at the astonishing rate of 5 tons each second.

Just 43 seconds after launch, the Ariane 5 was traveling faster than the speed of sound. After a minute and three seconds of flight, the Ariane 5 slowed to decrease the pressure on the launch vehicle which it encountered while passing through what is known as “Max-Q.” This is the part of the flight where the vehicle’s speed along with the pressure of the Earth’s atmosphere conspire to place the rocket under the greatest amount of stress.

During the initial part of the launch the Ariane 5’s axis is positioned to guarantee that it is parallel to the speed vector so as to lessen the aerodynamic pressure on the rocket as it climbs out of Earth’s gravity well. Rain caused today’s launch to slip by about an hour. Image Credit: Arianespace

By the time the launch vehicle and payload had reached an altitude of 40 miles, the rocket was flying at speeds reaching approximately 1,250 miles per hour. The two boosters, which had hefted the core stage and payload on their way through the start of the flight had been spent about 45 seconds into the flight. At this point they were jettisoned and left to fall back to Earth. They eventually crashed into the Atlantic Ocean, some 300 miles east of the place where the mission had launched from.

This marked the first flight of 2014 for the Ariane 5, the 72nd total launch of the Ariane 5 and the 250th launch overall that the company has conducted. The firm has developed a winning streak of some 58 missions in a row which have been successfully accomplished. Today’s launch could be the start of a very busy year for Arianespace which has 12 planned flights set for 2014.

The Ariane 5 launch vehicle is described as having the ability to hoist an estimated 22,462 lbs (10,210 kg) to orbit. The two satellites as well as the rocket’s SYLDA dual-passenger dispenser system (which allows more than one satellite to ride the Ariane 5 rocket to orbit) weigh approximately 20, 702 lbs (9,410 kg). The Expedition 38 crew on board the International Space Station captured this image of the Ariane 5 rocket’s ascent. Photo Credit: NASA / Rick Mastracchio

The first spacecraft to disembark on what was designated Flight VA217 was the ABS-2 relay satellite. Space Systems / Loral (SSL) constructed the ABS 2 spacecraft for satellite operator ABS. ABS 2 will provide a wide range of services, these include direct-to-home, cable distribution, VSAT and data networks. It will operate at orbital location 75 degree East.

“My satisfaction is all the greater that tonight’s mission is the very symbol of Arianespace’s dual raison d’être. Arianespace provides Europe with a guaranteed and independent access to space; while at the same time it delivers high-quality launch services to commercial satellite operators worldwide,” said Arianespace’s Chairman and CEO Stéphane  Israël.