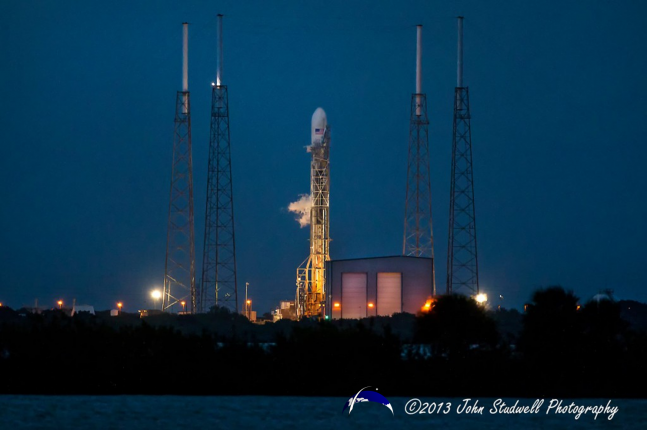 The launch of Thaicom 6 will be the third mission that SpaceX has used the v1.1 variant of its Falcon 9 rocket to carry out. Photo Credit: John Studwell / SpaceFlight Insider According to a report appearing on SpaceFlight Now – the launch window will remain open for 86 minutes. SpaceX has in the past repeatedly attempted to launch during the opening of the window in the past, only to see an issue crop up that prevented it. The company has made a name for itself by working through a problem, and getting the rocket off the pad.

If SpaceX can get the Thaicom 6 spacecraft on its way on Jan. 3, it will be the second mission in a month that has been sent aloft by the Falcon 9 and the third carried out by the v1.1 configuration of the launch vehicle. Thaicom 6 had been slated to launch earlier this year, but SpaceX was forced to push the launch date back.

The Falcon 9 v1.1 is an upgraded version of the rocket which made history by sending the first commercial spacecraft, the Dragon, to the International Space Station (to date three Dragons have traveled to the station, delivering thousands of pounds of cargo to the orbiting laboratory). The F9 v1.1 has stretched fuel tanks, upgraded avionics and a pattern of nine Merlin 1D engines arranged in a pattern known as the “octaweb.”

The Merlin family of engines uses RP-1 (a highly-refined form of kerosene) and liquid oxygen as propellant. The Merlin was originally designed to be reused. To date, this has not taken place.

Thaicom 6 is a television communications satellite which will be managed by the Thaicom Public Company Limited. Much like last month’s launch of the SES-8 spacecraft, Thaicom 6 will be what is known as “co-located” in the same orbital area as another satellite – Thaicom 5. This is 78.5 degrees East, known as the “Hot Bird” position.

Also like SES-8, Thaicom 6 will be placed into a geostationary orbit. It will be the second satellite placed into such an orbit by the Falcon 9 v1.1 launch vehicle.

The satellite was built by Dulles, Virginia-based Orbital Sciences Corporation, which produced the spacecraft at an estimated cost of approximately $160 million. It is a three-axis stabilized satellite and contains 18 active transponders which operate in the C-band, as well as eight Ku-band transponders. Thaicom 6 is tasked with providing communications services to Asia, Africa, Australia, Europe and predominantly DTH (direct-to-home) service to Thailand.

If all goes according to plan, this will mark the eighth launch for the highly-successful Falcon 9. Seven will have launched from Cape Canaveral, and one, so far, has taken to the skies from Vandenberg Air Force Base in California.

SpaceX has some 10 missions on the 2014 launch manifest. These include missions to the International Space Station for NASA as well as commercial payloads similar to those for Thaicom Public Company Limited. If SpaceX sends Thaicom 6 into the black? According to SpaceFlight Now, it will mark the fastest turnaround of a pad since the launch of two Delta II rockets from Cape Canaveral’s Space Launch Complex 17 in 1999.

So will the launch go head … I’m thinking this winter storm will stop it.