SpaceX CRS-5: Grid-Fins and a Barge 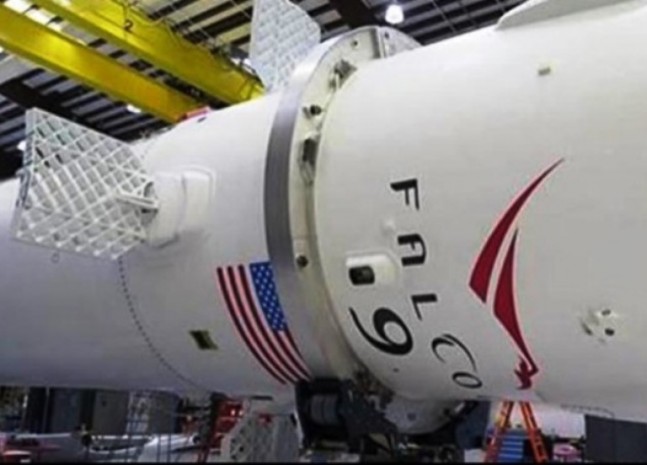 Over the weekend, SpaceFlight Insider reported on Space Exploration Technologies Corporation’s (SpaceX) plans to launch its next International Space Station (ISS) re-supply mission, CRS-5, no earlier than (NET) Dec. 16. In that article we briefly reported on SpaceX’s intentions to fly an upgraded Falcon 9V1.1 (F9) booster and its intention to attempt the first-ever off-shore barge landing of the booster’s first stage. A few more details on the unique aspects of the CRS-5 mission have now been made available. On Saturday, Nov. 22, SpaceX’s CEO, Elon Musk, revealed, on Twitter, a photo of the CRS-5 F9 booster which depicts the first “flight-version” of grid-fins which will be used to enhance the “precision-landing” capabilities of the first stage.

Musk explained, “grid fins are stowed on ascent and then deploy on reentry for “x-wing” style control. Each fin moves independently for pitch / yaw / roll.” Musk continued, “entry velocity is too high for a precision landing with N2 [nitrogen gas] thrusters alone. Must have aero surfaces for pitch trim.”

In addition, and perhaps most interesting, Musk Tweeted a photo of the much anticipated “barge” on which the first “solid-surface” F9 landing will be attempted. Musk described the vessel as an “autonomous spaceport drone ship,” and stated that the thrusters [on the vessel have been] repurposed from deep see oil rigs [and] hold position within 3m even in a storm.”

Just last month, on Oct. 24, Musk revealed that a landing barge was being constructed in Louisiana, and, since that time, speculation has centered around the barge being constructed at the Conrad Shipyard in Morgan City, LA, where NASA’s Pegasus barge is being refurbished and upgraded for use in transporting the first stage of NASA’s Space Launch System (SLS).

Stay tuned to SpaceFlight Insider for continuing coverage of SpaceX and its Dec. 16 launch and a landing attempt.

Grid fins kinda like drag deployment on a WWII A-4 dive bombing.

Maybe your SRB design was wrong and SpaceX has a better plan, who’s to say. Just saying… SpaceX seems to have a history of making things better, than before.

GARY W. WINKLER: Apparently Space-X is using these for more than just drag or for passive pitch/yaw stabilization. The article indicates that Space-X intends to use them for “pitch / yaw / roll” control. That’s a neat trick if they can get it to work!

Once they start landing back on land the barge will make a good transporter for SpaceX’s BFR.

SpaceX calls this a ship, not a barge .. so no worry about Bezos’s patented “barge” landing system to worry about.

OK, but isn’t it strange to patent something every person for the past 100 years or so uses to work on while at sea anyway. Hell, I was trained as a diver on one of these barges 25 years ago. We all know this patent is a joke, trying to delay SpaceX their progress. (This portion of the comment has been deleted due to its violating SFI commenting policies)

Did Bezo ‘reduce the concept to practice?’. How did he get a patent without showing that it would work? Or did he demonstrate the concept with a swimming pool or something? Just curious.

A barge has to be tugged or towed into place. A ship has it’s own engines. Seems Bezos rush to patent another person’s idea, just to keep SpaceX in check, was a little shortsighted. Guess he couldn’t patent a ship with a flight deck idea. He’s a 100+ years late for that. Let’s hope SpaceX succeeds & keep pushing the paradigm shift.

T+ 7
Sync audio inputs to block overtalk, show operator onscreen when they were blocked, for repeat.

How the fudge does this clown keep getting away with it?
A multi million dollar rocket launch fully documented launch and docking with the ISS
BUT
The alleged “hard landing” which is essential to Elon’s claims that SpaceX will soon turn a profit is only seen via a pitiful home video from the landing barge.

I’m willing to believe that grid fins could steer the rocket during the high speed descent, that is how a smart bomb operates.
A smart bomb does not slow down before impact.
The only kind of control surfaces that would be effective at speeds below about 50 MPH would be very large conventional hinged flaps.

Now to the rocket science part.
Gimballed thrust is used to correct the trajectory and attitude of a rocket during FORWARD flight.
Vectored thrust creates a torque about the centre of mass during the low speed part of the ascent and also by acting against the Centre of pressure once the rocket is travelling fast.

Those conditions do not exist during hovering or reverse flight.
Hovering craft like the Harrier Jump-Jet or the personal rocket packs are kept in a stable position by varying the thrust to four or more widely spaced outlets.

A hovering rocket can NOT balance the broomstick by swiveling the rocket gimbals.

The video is simply PATHETIC.
If the rocket really did make an accurate approach to the landing platform but landed too hard and exploded then why the fudge are there no good videos?
How hard would it be to have several (good) cameras including one pointed up to see the rocket closing in on the barge.

EWON is a genius?
Well…..maybe
But he’s no rocket scientist!

Has the problem with the deck been solved ? I see generators at each end,
and high pressure bottles, but not the tanks nor the capacity to use off the
shelf items to correct for dynamic wave variances.