SpaceShipTwo: The Survival of a Pilot and an Industry 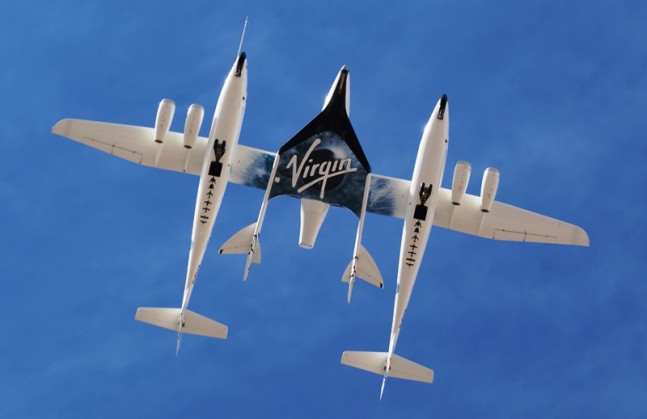 Only days after the explosion of Orbital Sciences Corporation’s Antares rocket on Wallops Island, VA, Virgin Galactic’s SpaceShipTwo experienced a catastrophic failure. The unlikely survival of a test pilot, and the tenacity of a company, provide a compelling narrative blending human interest and entrepreneurial drive.

On Oct. 31, SpaceShipTwo (SS2 ) took off under the wings of WhiteKnightTwo, the carrier aircraft responsible for deploying the spacecraft at launch altitude. After detaching from the airplane, SS2 ignited its engines and quickly accelerated to Mach 1. Between 9 and 11 seconds after ignition, co-pilot Michael Alsbury unlocked the craft’s feathering mechanism.

The feathering mechanism rotates the ship’s twin tail booms into re-entry positions to facilitate controlled descent. The booms are designed to be shifted into the feathered position when SS2 is traveling at Mach 1.4. The premature action precipitated a catastrophic disintegration that took place only seconds later. At an altitude of nearly 9.5 miles (15.2 kilometers), SpaceShipTwo broke apart, killing Michael Alsbury. All of that has been corroborated by the National Transportation Safety Board (NTSB) in an updated announcement issued on Nov. 12. Yet, remarkably, pilot Peter Siebold survived the stratospheric accident, which left debris strewn across nearly five miles of the Mojave Desert. Siebold, apparently unaware that his co-pilot had engaged the feathering mechanism, was ripped from the craft as it broke apart. Since the SS2 cabin is pressurized, the pilots were both without pressure suits. At such altitudes and speeds, Siebold lost consciousness quickly.

Free-falling from 50,000 feet, he regained consciousness about halfway through his tumble, indicating to a passing aircraft that he was still alive by flashing a thumbs up. His parachute automatically deployed on descent. On the ground, a fellow pilot assessed Siebold as “pretty banged up,” with a smashed shoulder. Considering he had just fallen out of a spaceship ripped apart while traveling at the speed of sound at 50,000 feet without protective outerwear, however, he sustained relatively minor injuries. Siebold was discharged from the hospital barely a week after the accident.

His co-pilot, Michael Alsbury was, unfortunately, not as lucky. Alsbury was not dislodged from the craft as it broke apart. Without ejector seats, Alsbury’s chances of survival, even had he remained conscious, were slim. He was found on a desert road, still strapped to his seat in what remained of the cockpit. His parachute had not deployed.

Yet, amid the ongoing NTSB investigation into the accident, and the remarkable human interest stories focusing on Siebold (see, for example, the LA Times profile on the test pilot), perhaps the most newsworthy part of the SS2 tragedy is its impact on the future of space tourism. Or, lack thereof. Virgin Galactic CEO George Whitesides has indicated that the space tourism company intends to continue with test flights as soon as a replacement is available. Dubbed SpaceShipTwo Serial No. 2, Virgin Galactic was already underway on construction of a second test vehicle before the accident in late October. Instead of pausing construction, however, the company has turned to the new spaceship with renewed vigor and has stated that tests flights could renew – as soon as April 2015.

Of the replacement vehicle, Whitesides told the Associate Press, “That’s provided some solace to all of us, and I think there’s sort of a therapeutic benefit to folks to be able to put their energies into constructive work.”

Virgin Galactic intends to begin test flights as soon as the vehicle is complete, perhaps even before the completion of the official NTSB investigation into the accident of its predecessor. The Federal Aviation Administration (FAA), which has issued Scaled Composites (the spaceship builder) an experimental test flight permit for the craft, has announced it will pay special attention to the feathering mechanism when evaluating the Serial No. 2 ship.

Virgin Galactic hopes to eventually produce up to one spaceship a year, taking six passengers over sixty miles above the Earth’s surface. The company already maintains an extensive waiting list, selling seats at $250,000. The company reports that even in the week after the accident it sold several seats. Speaking of the incident, Whitesides says, “There was no question it was a tragic setback, but it’s one from which we can recover. With Serial No. 2, we’ll be putting a stronger, even better ship into initial commercial service and I think we’ll be able to get back into test flights soon and carry forward.”

The company issued the following statement: “At Virgin Galactic, we are dedicated to opening the space frontier, while keeping safety as our ‘North Star.’ This has guided every decision we have made over the past decade, and any suggestion to the contrary is categorically untrue…We have the privilege to work with some of the best minds in the space industry, who have dedicated their lives to the development of technologies to enable the continued exploration of space. All of us at Virgin Galactic understand the importance of our mission and the significance of creating the first-ever commercial spaceline. This is not a mission that anyone takes lightly.”

The apparent resiliency of the company may indicate an important shift in attitudes towards space tourism. Once the realm of science fiction, the inevitability of commercial spaceflight appears to have permeated popular culture. Virgin Galactic’s emphasis on forward progress fits well into the wider attitude that now embraces spaceflight as a logical point of progress. The sustained interest in space tourism may thus be nearly as surprising an outcome of this tragedy as Siebold’s survival.