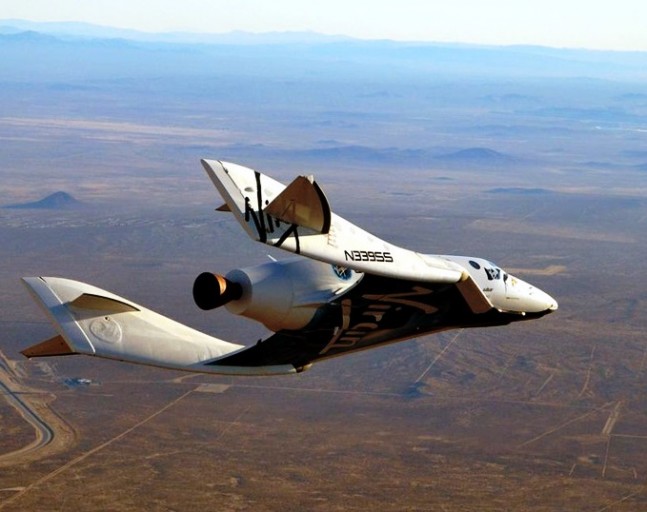 During a 12:19 p.m. EDT (16:19 GMT) powered test flight of Virgin Galactic’s SpaceShipTwo, the spacecraft encountered an in-flight anomaly and crashed into the Mojave Desert, according to a report appearing on Kern Golden Empire.com. The company referred to the loss of the spacecraft as a “serious anomaly” – which resulted in the loss of the spacecraft. Early reports from CNN stated that at least one pilot has been killed – this has since been confirmed, but no names have been issued at the time of writing.

It is also being stated that SpaceShipTwo – essentially a glider after its powered ascent – broke up at approximately 50,000 feet (15,240 meters). WhiteKnight Two, the aircraft which ferries SpaceShipTwo aloft, releases the craft (which then activates its rocket engine – flying to sub-orbit). An image posted on NASASpaceFlight‘s Twitter account showed several images taken by Kenneth Brown and posted on NBCNews’ Twitter account. In the series of photos, the spacecraft can be seen separating from WhiteKnightTwo, and then there appears to be a misfire of the engine – and the craft appears to disintegrate.

SpaceShipTwo is manned by two pilots, the company issued a statement saying that the fate of the crew was “unknown” – underscoring the chaotic status of the situation on the ground early on. CNN, just before 3 p.m. EDT, confirmed that one pilot had been killed and the other was seriously injured.

Reports are coming in of debris raining down across the desert. At least three debris tracks have been seen.

Joel Glenn Brenner, a reporter who has covered Virgin Galactic’s space efforts, via CNN, has stated that the spacecraft encountered an anomaly, that a hard restart was initiated and that there was apparently an explosion. SpaceShipTwo’s engine has long been an issue with the craft’s ability to get to sub-orbit. In 2007, three people were killed during a test of SpaceShipTwo‘s hybrid rocket engine. SpaceShipTwo’s new, plastic fuel has been tested at sea level, it is unclear however if the fuel has ever been tested in conditions mimicking the pressure it would encounter at the altitude of 50,000 feet.

It is also being reported that there are multiple debris fields and that while one of the two crew members was able to escape, the other was unable to do so. The pilot who died was still strapped into his seat.

ABC News reported last month that Virgin Galactic announced that the first flight of their commercial space tourism venture had slipped to no earlier than next year. Previously, the company’s owner, British billionaire Richard Branson, had given a number of dates as to when the WhiteKnightTwo and SpaceShipTwo duo would begin ferrying paying customers into the black of space.

The company has stated that it already has approximately 700 paying customers who have already purchased $200,000 tickets for flights on the spacecraft.

Technical issues involving SpaceShipTwo’s rocket engine have caused that date to repeatedly slip. For their part, Virgin Galactic is stating that they are placing safety in front of scheduling considerations. SpaceShipTwo’s wreckage can be seen in this image. Photo Credit: FOX News

Today’s tragedy comes less than three days after the loss of an Orbital Sciences Corporation Antares rocket exploded on its way to delivering 5,000 lb (2,268 kg) of cargo via the Cygnus spacecraft it was powering to orbit. A reporter on CNN noted that the public’s perception that private firms can handle what once was solely the purview of NASA  had been “tarnished”.

Although not affiliated with the company, former NASA astronaut Mike Massimino, emotionally stated: “This has been a bad day…”.

SS2’s predecessor, SpaceShipOne, conducted its final flight under the guidelines of the Ansari X-PRIZE on Oct. 4, 2004. Even at that point, The Virgin Group’s Sir Richard Branson had thrown his support behind the design. Control of Scaled Composites was acquired by aerospace giant Northrop Grumman in 2007. Both Scaled and Virgin Galactic formed The Spaceship Company in 2005 – with Virgin Galactic becoming the sole owner in 2012.

I’ve said hundreds times (and explained) why the suborbital space tourism (with the SS2 or the Lynx) is TOO DANGEROUS over FOUR YEARS AGO http://www.ghostnasa.com/posts2/073spacetourism.html and lately http://www.ghostnasa.com/flameSS2.jpg but no one listened to me because this business was expected to be very big and juicy, however, now I hope that the sacrifice of a test pilot will save the lives of hundreds other pilots and “space tourists” because it’s clear that, now, the whole program will be DELETED, but, also if this doesn’t happen, the time necessary to REDESIGN, build and test a SAFER vehicle will be in the order of 10-15 years!

With the latest news that the feather deployed early and likely led to the break up, how has no one criticized Joel Glenn Brenners remarks following the crash? She was clearly off-base and ranting not based on fact. She is a disgrace and shouldn’t ever be taken seriously in the future.