SES has contracted both United Launch Alliance (ULA) and SpaceX to fly its newest four C-band satellites into orbit in 2022. The satellites will serve as part of the company’s move to accelerate C-band clearing in order to meet the Federal Communications Commission’s goals of rolling out full 5G service in the United States.

Under contract to be built by Boeing and Northrop Grumman, the four satellites will enable SES to clear approximately 280MHz of mid band spectrum for 5G usage, while also seamlessly migrating the company’s existing C-band customers, ensuring no loss of coverage to over 120 million American homes and data service connections.

The Northrop Grumman built satellites, SES 18 & 19, will fly atop a SpaceX Falcon 9 rocket, from Florida’s Space Coast in 2022. Conversely, the Boeing built SES 20 & 21 satellites will fly atop ULA’s Atlas V rocket, flying in a 531 configuration. The satellites will be stacked atop one another, also launching from the Cape in 2022. While the costs for the launch contracts have not been disclosed, SES has stated that they only considered US launch providers for the contracts, with having the satellites in their target geostationary orbits on time being a high priority, leaving only ULA and SpaceX in the running. 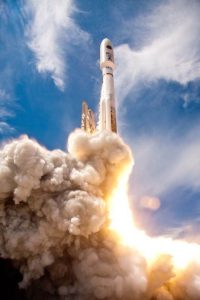 The Atlas V will be launched in the 531 configuration, as it did during AEHF2’s launch from Cape Canaveral. Image: ULA / US Air Force

While announcing the contracts, SES CEO Steve Collar shared, “Clearing mid-band spectrum expeditiously while protecting cable neighborhoods across America is a huge undertaking and one that requires partners that can deliver mission success and schedule assurance… We are thrilled to be working with ULA again and partnering to meet the FCC’s ambitious timeline for the accelerated clearing of C-band spectrum.” Collar also shared comment on the SpaceX aspect of the award, “We have a deep and trusted relationship with SpaceX having been the first to launch a commercial satellite with them and subsequently the first commercial company to adopt the flight-proven booster and we could not be more confident in their ability to deliver on this time-critical mission.”

ULA CEO Tory Bruno commented on the contract award, sharing “We are pleased SES selected ULA and our proven Atlas V for this important commercial launch service… Atlas V is known for its unmatched level of schedule certainty and reliability and this launch is critical to the timely clearing of C-band spectrum, empowering America’s accelerated implementation of 5G.  ULA’s legacy of performance, precision and mission design flexibility allow us to deliver a tailored launch service that minimizes orbit raising time and perfectly meet our customer’s requirements. We are thrilled to provide this optimized launch solution to SES for this crucial launch.

SpaceX COO Gwynne Shotwell commented on the contract awards as well, sharing “SES is one of SpaceX‘s most-valued partners, and we are proud of their continued trust in our capabilities to reliably deliver their satellites to orbit… We are excited to once again play a role in executing SES’s solutions to meet their customers’ needs.”

The satellites feature different power and propulsion methods depending on their manufacturer. For the Boeing builds, the satellites rely solely on electrical propulsion, whereas the Northrop Grumman satellites rely on a combination of electric and liquid propulsion. These differences are what determined which satellites will fly on which rocket, as the electrically powered satellites will need the capabilities of ULA’s Centaur upper stage in order to reach their permanent orbit quickly, whereas the Northrop Grumman builds are capable of using the Falcon 9’s less powerful upper stage and self raising under their own power. 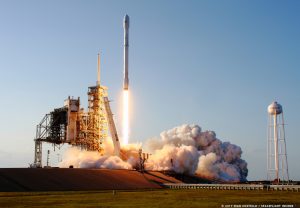 SES-10 takes to the skies on March 30, 2017, atop the first Falcon 9 to be re-flown. Photo Credit: Sean Costello / SpaceFlight Insider

Both launch providers have a history of successfully flying payloads for SES, with the Atlas V having launched two satellites in 2005 and 2006 respectively, and the Falcon 9 having flown six, including the very first re-flight of a Falcon 9 rocket.

While four satellites will be launched, two ground spares will be built in addition to the flight hardware. In addition to these spares serving as ground analogs for the flight models, one of these two will also serve as a backup in the event that there is a significant delay in the launch time frame, or in the event of a launch failure. This fifth flight-ready payload, while not guaranteed to fly, would fly atop a Falcon 9 rocket if needed.

While the FCC has mandated that satellite operators shall clear the lower 300MHz C-band by December 2025, the contract awards and quick deadlines by SES, serve as a means to potentially meet an earlier target of December 2023. The FCC, in an effort to move swiftly in vacating the C-band spectrum, has offered an incentive for early completion, worth up to $3.97 Billion.