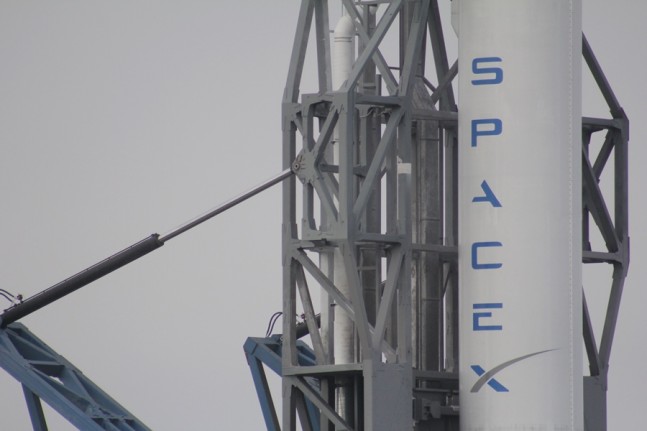 SpaceX and NASA is preparing to launch a Falcon 9 v1.1 booster with its payload of experiments and cargo supplies for the International Space Station. Part of that payload - is the SABOL experiment produced at the Florida Institute of Technology. Photo Credit: Jason Rhian / SpaceFlight Insider

CAPE CANAVERAL, Fla — On Jan. 6, 2015, a Space Exploration Technologies (SpaceX ) Falcon 9 v1.1 launch vehicle along with its Dragon cargo spacecraft, will lift off at 6:18 a.m. EST from Space Launch Complex 40 at Cape Canaveral Air Force Station in Florida. On board will be a unique experiment to study how proteins function in the unique environment found on orbit.

SABOL is a long-term project from the Florida Institute of Technology. It focuses on protein fiber formation, growth processes, and the relationship between protein fiber formation and neurodegenerative diseases. There is a process where tau-proteins self-assemble into long thin fibers. The resulting long protein fibers can form a gel that slows or even stops the nerve signals in the brain. In SABOL these fibers are formed in an acidic buffer solution.

According to a statement released by NASA: “…more than 3,700 pounds of scientific experiments, technology demonstrations and supplies, including critical materials to support 256 science and research investigations” will be sent to the International Space Station (ISS). Florida Tech’s Nano Racks – Self Assembly in Biology and Origin of Life (SABOL) will be one of those experiments. “There is a process by which the gravity pull of Earth causes the (protein) fibers to settle somewhat in the solution itself, and we think that enhances the creation of the gel. And so we designed experiment to test the growth of these fibers in microgravity. It’s called SABOL”, said Dr. Samuel Durrance, Professor of Physics and Space Sciences at Florida Tech, “We are going to study the growth of these proteins in microgravity environment. We expect it will develop more complex structures.”

CAD Model of NanoRacks-SABOL NanoLab Module Laboratory. The 9 vials in which the protein will be mixed with the buffer solution to initiate fiber growth can be seen. Image Credit: Sam Durrance / Florida Institute of Technology

There are 9 vials in SABOL with buffer and protein powder placed in them separately. A program will control when to mix the protein with the buffer in each vial.

At any one time there will be only 4 vials heated to 50 degrees centigrade (the reaction temperature) due to the power limitations onboard ISS, and after a period of 30 days, SABOL will be bought back to Earth. The data analysis will be done in Florida Tech’s Kennedy Space Center laboratory.

“All this happens automatically, so it has really been a challenge. But we are really excited about it,” Durrance said.

The results from SABOL will help scientists to understand the formation and structure of amyloid fiber in microgravity, hence, potentially help determine the origin of neurodegenerative diseases and possibly the complex molecules needed to trigger life itself.

SABOL is being flown to the orbiting laboratory as part of Space Florida’s International Space Station Research Competition. KunYang Li (Lily) is a SpaceFlight Insider Launch Correspondence intern from the Florida Institute of Technology, where she is currently working on obtaining her Bachelors degree in Astronomy & Astrophysics (with a minor in Computational Mathematics). She has  a strong passion for and fascination with astrophysics and is aiming for a career in  astrophysical research.

Lily is dedicated to better understanding the universe in which we live and tries to learn something new about space science everyday. When presented with the opportunity to have her content appear on SpaceFlight Insider, Lily jumped at the opportunity – becoming the first student under SFI’s partnership with the Florida Institute of Technology.