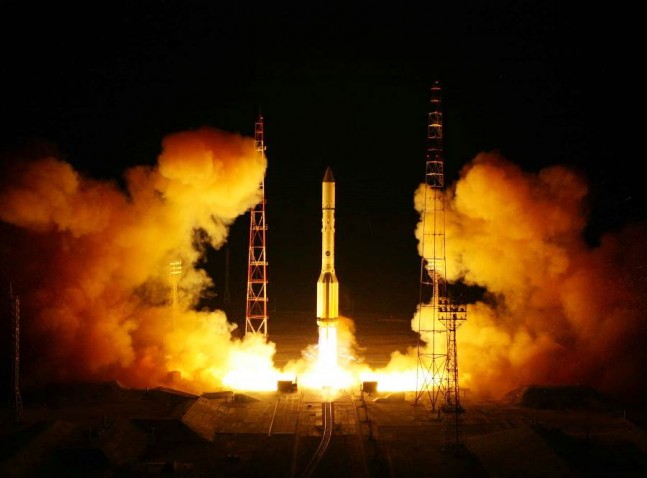 The mission was flown for the JSC Gazprom Space Systems based out of Moscow and was launched from Pad 24 at the Baikonur Cosmodrone located in Kazakhstan.

The Proton has encountered some rather spectacular failures in recent years with the loss of several Uragan-M GLONASS satellites launched on a single Proton in 2013 and the Ekspress-AM4R spacecraft which was lost in May of 2014. This particular launch was, by all accounts, a success with the rocket’s three stages carrying out a standard ascent profile. The Yamal-401 spacecraft was placed into a suborbital trajectory via the Briz-M upper stage. The Briz-M conducted out a 4 burn flight profile – first sending its payload into a circular “parking,” then a transfer and ultimately – a geosynchronous orbit. Once there, the Yamal-401 separated from Briz-M.

Yamal-401 weighs about 3 metric tons and was constructed by JSC ISS Reshetnev along with Thales Alenia Space  and was based on the Express 2000-A platform. According to a report appearing on Space FellowshipThales produced the spacecraft’s repeater antennas as well as portions of the satellite’s platform.

Yamal-401 will circle the globe at an orbital location of 90° East longitude where the communications satellite will provide services to Russia and other countries that were part of the former Soviet Union. The spacecraft will send one, fixed beam in the C band, as well as two fixed beams in the KU band.

JSC Gazprom Space Systems – will operate Yamal-401 spacecraft which, according to ILS, has: The total capacity of the Yamal 401 satellite will amount to 53 physical transponders or 88 equivalent (36 MHz) transponders.

“We thank Gazprom for the opportunity to launch this important satellite and to help expand their business with the launch of Yamal 401, the second launch for Gazprom by ILS. We are grateful for the mission teams of Gazprom, ILS, Khrunichev, ISS Reshetnev and Thales Alenia Space for their dedication to mission success throughout the entire campaign,” said ILS President Phil Slack.

Yesterday’s launched marked the 86th launch of an ILS Proton overall and the 2nd flight this company has carried out using the rocket this year. The Proton can trace its lineage – all the way back to 1965 – when it was initially launched, it served as a Intercontinental Ballistic Missile or “ICBM.” Proton was creation of Valdimir Chelomei’s design bureau and meant to serve as competition for the massive N-1 Moon rocket that the former Soviet Union was developing at that time.

The Proton Briz-M launch vehicle was developed and manufactured by Khrunichev State Research and Production Space Center of Moscow, which serves as the majority shareholder in ILS.

Merry Christmas!And all of the best of good luck in 2015 for the continuation of the Orion Mars mission going forward.Being somewhat new to this “SpaceflightInsider.com,my question is this:Is it possible to view spaceshots from the Baikonur Cosmodrone in Russia as we do at Cape Canaveral or Wallops Is.,Va.?I have yet to find time to try and watch.This the reason for my query. Thank you,Respectfully,Gregory L. Mitchell,w.Caldwell,N.J.

Hi Gregory,
SFI is only about a year old and staffed almost entirely by volunteers – we’ll try to add that service to those we already provide as soon as possible.
Sincerely and with kind regards, Jason Rhian – Editor, SpaceFlight Insider