Rockets for Commercial Crew launches begin to come together 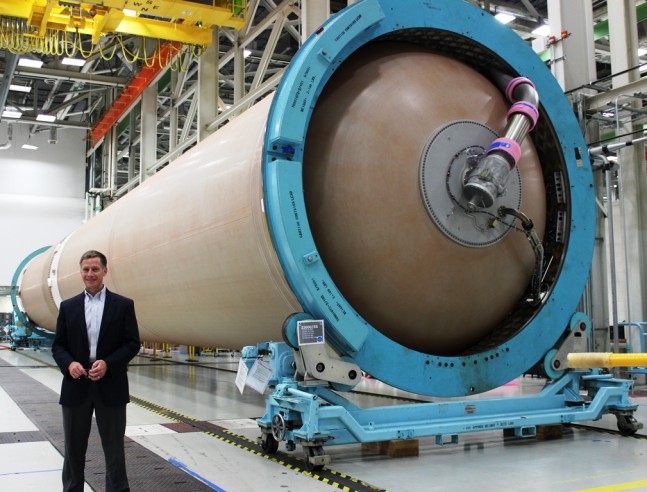 The codes AV-073 and AV-080 may not mean much to many, but they mean a whole lot to former astronaut Chris Ferguson and the team of engineers and technicians who will assemble the first Atlas V rocket to launch a crew to the International Space Station. That test and a precursor flight without crew are part of the final development work Boeing is completing with NASA’s Commercial Crew Program to certify a new crew transportation system for low-Earth orbit.

On its factory floor in Decatur, Alabama, United Launch Alliance, or ULA, is beginning to fabricate parts for the two rockets that are to launch Boeing’s CST-100 spacecraft in 2017.

As Boeing’s director of Crew and Mission Systems for the company’s commercial crew division, Ferguson toured ULA’s assembly factory this week to watch the rockets begin to take shape. Ferguson’s last spacecraft, NASA’s space shuttle Atlantis, already was built and had achieved veteran spaceflight status years before “Fergie”, as he is known, climbed into the commander’s seat for the last of the shuttle missions in 2011. Beginning later this year, the CST-100 spacecraft that will launch atop the Atlases will be assembled at another place familiar to Ferguson, a former space shuttle hangar at NASA’s Kennedy Space Center.

“The last time we were at this stage of development for a human spacecraft was in the 1970s when we were building the shuttle,” Ferguson said. “I have Apollo manuals on my desk – not to copy designs but to understand how they did it and to validate the decisions we’ve made with regard to provisions for the crew, what kind of spacesuits they wear, what kind of seats they sit in, and why they sit that way. Engineers put an enormous amount of thought into many low-level designs decades ago, but now we’re trying to recreate the “why” behind all that. It’s a little intimidating, but it’s fun. You learn why the space program took the shape it is today over five decades ago.”

Just like airplanes, rockets have unique tail numbers, or codes, that distinguish them from one another. AV-073 is the 73rd Atlas V that will be built, and AV-080 is the 80th in the line of boosters. Both have another distinguishing characteristic from other Atlas V launch vehicles, as well – since no previous Atlas V has carried people into space, these will be the first to be certified to launch humans. Up until this point, the rockets have been used to lift more than 60 critical missions without people: satellites, robotic probes and even the Mars rovers.

“To have Chris come in and talk to the team really put a face to the program,” said Fred Hernandez, production operations chief engineer for ULA. “We’re so used to launching things, and so to get to see the people involved in the launching of humans means we’re that much closer to our goal.”

The factory is building pieces of the rocket unique to the CST-100/Atlas V stack that will be used in the testing regimen. The adapter connecting the top of the rocket’s upper stage to the spacecraft, for example, is a new piece that has been meticulously designed and must be built with equal care.

“There are a lot of different major structures for the flight test vehicles that are going through the factory now,” Hernandez said.

Manufacturing also has begun for the fuel and oxygen tanks of the Centaur upper stage that will provide the final push to get the CST-100 and its crews into Earth orbit.

“They begin constructing the rocket about 18 months in advance, so it’s still a little early, but a lot of the parts that will go into our first vehicle are here,” Ferguson said. “So component-level assembly’s going on. We don’t have a parking spot out here yet, but it comes very soon. And by the end of the year we will have an actual slot. It’ll become very, very real when that happens.”

NASA’s Commercial Crew Program relied on years of human spaceflight experience to develop the requirements needed to ensure transportation systems are qualified to fly astronauts. Through a Commercial Crew Transportation Capability, or CCtCap, contract, NASA will work with Boeing to ensure its rocket, spacecraft, and associated ground and mission systems are safe and reliable.

For starters, each Atlas V will carry an extensive suite of sensors and fly with a robust computer that together will be able to detect a problem in the booster as it launches and ascends into space. Although unlikely to occur, a problem severe enough to risk the mission would trigger an abort sequence for the rocket that would automatically eject the spacecraft and carry its astronaut crew back to Earth safely. Additionally, the boosters for the CST-100 flights will use a Centaur upper stage fitted with two RL10 engines, instead of the usual single engine, to provide added performance.

“We fortunately don’t see a lot of surprises in manufacturing,” Hernandez said. “The Atlas line builds 10 or 11 rockets a year, and that rhythm alone helps to minimize a lot of the issues that we could have.”

AV-073 will be outfitted as though it is carrying a crew but will fly the CST-100 without astronauts in an orbital flight test, a significant step on Boeing’s path to certification.

AV-080 is the rocket that will carry the first people inside a CST-100 for a flight into space. Still a flight test, the objective is to launch the Atlas V from Space Launch Complex 41 at Cape Canaveral Air Force Station and place the CST-100 on a path to the station. Crew members will fly to the orbiting laboratory and stay there for a few days while the spacecraft’s systems are evaluated for their performance. The flight test crew would then use the vehicle to return home to the United States, completing the test.

Although still about two years away, the flight tests are close enough to prompt excitement and ramp up anticipation almost daily at the Atlas V assembly hall.

“We’re obviously very proud of our success rate, and we’re sort of taking the approach that we have a recipe for mission success, and we have to continue to execute on that,” Hernandez said. “If we keep that focus, that will transition over into the crew vehicles as well.”

This article was written by NASA’s Steve Siceloff and can be viewed here: Commercial Crew

Hopefully Boeing will also get the second phase of Commercial Cargo.

The Show must go on with CST-100…great new Step into the Space. Please can you tell me,which Crew & Astronauts was in Training for the first Flight in Space? Thanks Jan