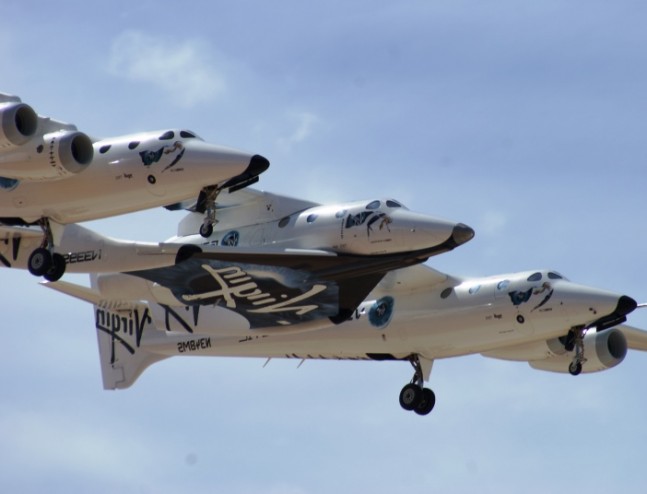 Virgin Group founder Richard Branson, after arriving at the SpaceShipTwo in Mojave Desert, California on Saturday, acknowledged that his dream of commercial space tourism may have ended in the explosion that consumed Virgin Galactic’s test craft, but the company will learn from the mistakes and continue its mission to send people into space.

“This team is a group of the bravest, brightest, most determined and most resilient people I have ever had the privilege of knowing,” he told reporters at a press conference. “We are determined to honour the bravery of the pilots and teams here by learning from this tragedy. Only then can we move forward, united behind a collective desire to push the boundaries of human endeavour.” SpaceShipTwo crashed on Friday in the Mojave Desert on a test flight, killing the co-pilot Michael Alsbury and injuring Peter Siebold piloting the spacecraft. Siebold was taken to the hospital, he is now alert and talking with his family and doctors.

Significant risks are a part of the space-travel business, Branson said, but admitted that “yesterday, we fell short.” He added that “we will now comprehensively assess the results of the crash and are determined to learn from this and move forward together as a company.”

Investigators from the National Transportation Safety Board (NTSB) on Saturday began the task of sifting through the wreckage, in the desert near Edwards air force base north of Los Angeles, going through the test flight data and interviewing witnesses. Senior Investigator Lorenda Ward is leading the team as investigator-in-charge. Acting Chairman Christopher A. Hart is accompanying the team and will serve as the principal spokesman during the on-scene phase of the investigation.

“We are determined to find out what went wrong and are working with the authorities to get that information,” Branson said. “It is too early for me to add any details of the investigation at this stage. Hart said he did not even know if SpaceShipTwo had a black box flight recorder.

The spaceraft took off at about midday on Friday, but reported an “in-flight anomaly” about 40 minutes later and broke up at 45,000ft. Siebold parachuted out and, despite incurring unspecified injuries, reached ground safely and was taken to hospital. Alsbury was not so lucky. It is not clear if he too parachuted out and died on his way to the ground, or if he never made it out. Pieces of the spacecraft were strewn across the desert to the northeast of Los Angeles.

“The bravery of test pilots generally cannot be overstated. Nobody underestimates the risks involved in space travel,” Branson said. He recollected the words of Canadian ISS Commander Chris Hadfield: “As a former test pilot, crashes and even deaths were frequent. It is a known part of the business. Little solace, but reality. Pushing the bounds of knowledge and possibility comes with unavoidable risk.”

Virgin chief noticed he would figure out how to improve the safety and performance of its spacecraft. “We do understand the risks involved and we are not going to push on blindly – to do so would be an insult to all those affected by this tragedy. We are going to learn from what went wrong, discover how we can improve safety and performance, and then move forwards together,” he said.

The fatal accident and the loss of SpaceShipTwo have shattered Branson’s dream of boarding a test flight himself. It is too early to say if a new test spacecraft will be built. Now Branson’s thoughts remain with the families of the pilots, and all those affected by this tragedy.

This article originally appeared on Astro Watch and can be viewed here: SpaceShipTwo