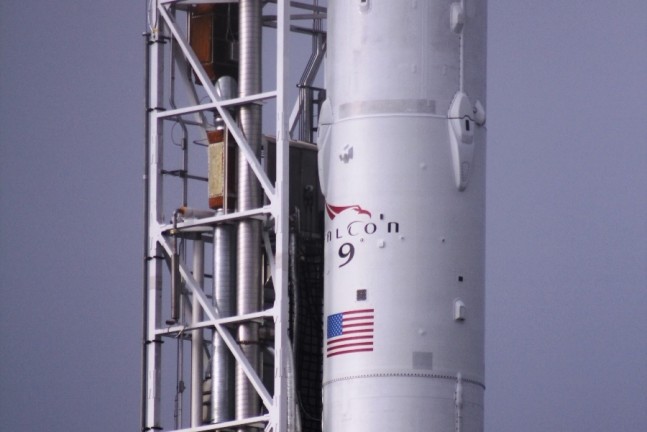 SpaceX has readied one of the company's Falcon 9 rockets to ferry a Dragon spacecraft, loaded with cargo bound for the International Space Station. Launch is currently set to take place at 1:22 p.m. EST from Cape Canaveral's SLC-40. Photo Credit: Jason Rhian / SpaceFlight Insider

CAPE CANAVERAL, Fl — Space Exploration Technologies’ (SpaceX ) fifth contracted mission under the Commercial Resupply Services (CRS ) initiative – might take a little longer to be given the green light for launch. A report appearing on NASASpaceFlight.com has stated that due to issues surrounding the rocket’s static test fire that was attempted on Dec. 16 that the flight might have to be delayed. The static test fire is the last milestone that the Hawthorne, California-based company has to complete prior to liftoff. Since this appears to not have happened the flight of SpX-5 – likely will not happen until early January – at the earliest.

SpaceX has not made any announcement as of yet, with even NASA’s Public Affairs Office responding to inquiries as if the launch was moving forward. The launch of SpX-5 has already slipped several times, the most recent of which had placed the launch at this Friday, Dec. 19 at 1:22 p.m. EST. The launch site is Cape Canaveral Air Force Station’s Space Launch Complex 40 located in Florida.

When it does take to the skies, the mission, dubbed SpX-5 or CRS-5, will see one of SpaceX’s Dragon spacecraft ride the Falcon 9 v1.1 booster to orbit. Once there, the Dragon spacecraft will ferry an array of supplies, crew cargo and scientific experiments to the International Space Station. The static test fire – is the last milestone that has to be completed before the Falcon 9 v1.1 is cleared for launch. Photo Credit: SpaceX

The static fire test – is just the last in a long series of requirements that has to be conducted before the Falcon 9 v1.1 is given the final go-ahead to launch. During the test fire, controllers walk the Falcon 9 all the way up until launch. The F9 is fueled with RP-1 (a refined version of kerosene) propellant as well as the liquid oxygen oxidizer two hours and thirty five minutes before “T-0.”

In fact, SpaceX walks the booster through the entire launch sequence – even activating the nine Merlin 1D rocket engines in the F9’s first stage. The rocket is held in place and the engines are only on long enough to confirm that everything is functioning as advertised.

“While the recent static fire test accomplished nearly all of our goals, the test did not run the full duration.   The data suggests we could push forward without a second attempt, but out of an abundance of caution, we are opting to execute a second static fire test prior to launch. Given the extra time needed for data review and testing, coupled with the limited launch date availability due to the holidays and other restrictions, our earliest launch opportunity is now Jan. 6 with Jan. 7 as a backup,” said SpaceX spokesperson John Taylor.

Taylor went on to note that both the Falcon 9 and Dragon were in good health and that the launch team is looking forward to carrying out this flight after the start of the New Year. He also provided details as to why the launch would not be taking place sooner.

“The ISS orbits through a high beta angle period a few times a year. This is where the angle between the ISS orbital plane and the Sun is high, resulting in the ISS being in almost constant sunlight for a 10 day period.  During this time, there are thermal and operational constraints that prohibit Dragon from being allowed to berth with the ISS,” Taylor said.

Argh, dang it Jason I was counting on this due to missing the second attwmpt of Orion. Was there the first day at LC-39 the day of the scrub and was supposed to be back the next day on December 5th when she launched so I needed to be at the drive in 5 launch to be back to whole again!!!

what’s funny is how the space xer’s will point out how other company’s have failures and delay’s as if they are so perfect.

SlipX at it again. Surprise, surprise.

After Orbital’s tragedy, all eyes(commercial & otherwise) is on SpaceX. You could say that part of commercial space’s future is riding with this launch. Just my opinion. Hope the Gremlins take a day off during the launch…

As an airline employee, I’m aware of how things can go wrong on one of the most reliable aircraft in the world. So I won’t be too critical with SpaceX when they’re trying to send Dragon 5 into orbit. I wish them luck when they light the candle.

Who knows what’s really going on at KSC Spacex, I do know they have burned out their workforce due to excessively long grueling hours. Yah, Spacex has this attitude that it’s a privilege to work hours on end for months at a time. But in reality, this causes things to get overlooked especially in a environment were there is very little Quality control oversight. I’m sure this is a factor into these frequent delay’s and the fact that the best of the best refuse to work for a company that doesn’t understand the importance and value of family time.